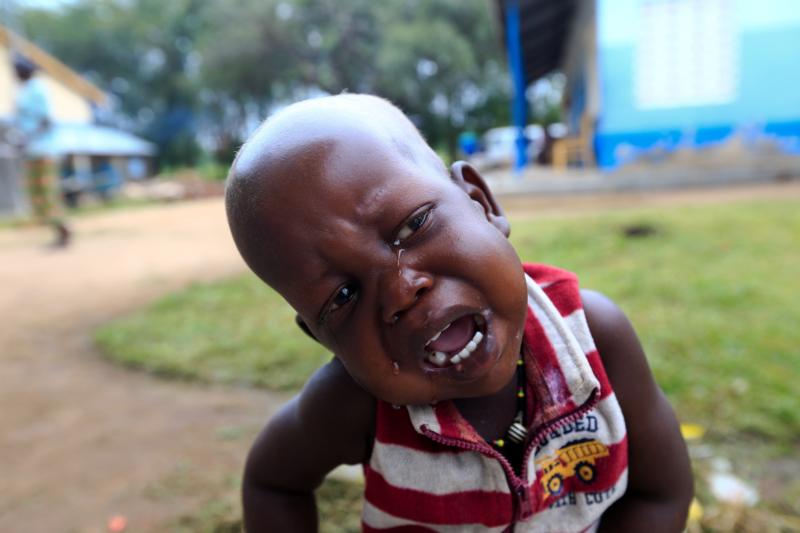 A refugee child from South Sudan cries while waiting for medication in 2017 at a health care center at a settlement camp in Moyo, northern Uganda. (CNS photo/James Akena, Reuters)

NAIROBI, Kenya (CNS) — Hundreds of refugees from the South Sudan still are seeking asylum in neighboring Uganda despite a peace accord signed by opposing factions in their homeland.

At least one Catholic bishop and two Catholic humanitarian organizations expressed concern that the refugees’ needs outstrip the ability of the agencies to respond.

“This way the refugees we are currently sheltering here in Arua will effectively return home and equally prevent others from fleeing the country,” the bishop told Catholic News Service by telephone.

He said the refugees sheltered in Arua are in dire need of basic items as well as pastoral care.

“We have already appealed for the pastoral workers to serve among the refugees as well as for their physical needs, food, shelter and medicine,” Bishop Odoki explained.

The bishop has called on the international community to step up to aid the South Sudanese refugees. “My hope is that this will bear the most expected results,” he said.

“I have even reached the Holy Father, Pope Francis, over the issue. He did promise that he would reach the heads of religious congregations based in Rome on the issue,” Bishop Odoki said.

Some religious congregations have already responded. Three Divine Word priests and a religious brother have arrived in Uganda and are providing pastoral services, while the Holy Spirit Missionary Sisters planned to send a nun, he said.

Haydee Diaz, head of programming for Catholic Relief Services in Uganda, said in an email that more than 9,000 new arrivals streamed across the border from South Sudan in January and February as fighting continued, and that most remained in the country.

“Bidi Bidi Refugee Settlement in the Yumbe region of northwest Uganda, where CRS is working, has been declared saturated with a refugee population from South Sudan at approximately at 287,000 people,” Diaz said.

Since January only family reunification cases are being accepted at the camp, while new arrivals are being relocated to other settlements in the West Nile region, Diaz said.

“The influx of refugees was expected to continue as the overall insecurity in South Sudan persists,” she said.

CRS, the U.S. bishops’ international relief and development agency, continued to build shelters for refugee families with special needs and for refugee children who do not have parents, Diaz added.

David Adong, humanitarian emergency coordinator for Caritas Uganda, told CNS that refugee needs such as shelter, water, food and medicine are overwhelming the ability of the humanitarian agencies working in northern Uganda to meet the current need.

“Particularly food and nutrition security is the most significant unmet need with food rations being … inadequate,” he said via email.

PREVIOUS: Spanish Jesuit murdered in Peru held up as ‘exemplary’