Why the church law forbids violating the seal of confession 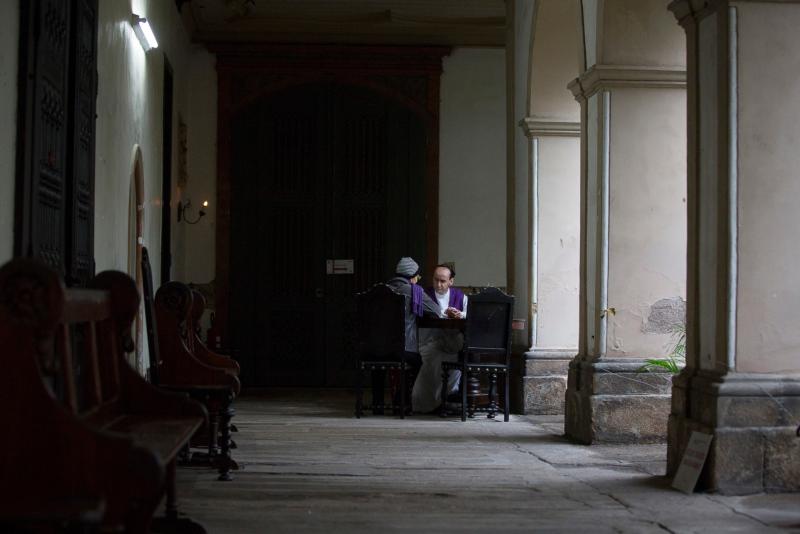 In this 2013 file photo, a priest hears a pilgrim’s confession under a shelter outside St. Anthony’s Convent in downtown Rio de Janeiro. (CNS photo/Tyler Orsburn)

VATICAN CITY (CNS) — The seal of confession is so important and sacred that a priest would be automatically excommunicated under canon law for directly revealing the contents of a confession.

The sacramental seal is absolutely inviolable and “admits no exceptions” — even if the intention was to prevent an imminent evil or serious crime, said Msgr. Krzysztof Nykiel, regent of the Apostolic Penitentiary, a Vatican court dealing with matters of conscience.

Not even the death of the penitent can release the confessor from the obligation to maintain the seal, he added.

The Catholic Church has always given special importance to the confidential nature of administering the sacrament of penance, the monsignor wrote in an essay, published in Italian, in the Polish journal, Teka Komisji Prawniczej, in 2014. The penitentiary sponsored a conference at the Vatican the same year on “the confessional seal and pastoral privacy.”

Since the seal has its origin and foundation “in the truth and transcendence of God,” he wrote, “only God can open and reveal the secret that the seal encloses.”

The “secret” nature of the sacrament of penance reflects and respects the intimate, personal encounter between God and the individual. Confession is to be a “holy place of this communication of love and friendship” where God can come and dwell, the monsignor wrote.

The priest who hears confession is present “exclusively in the name and place of God,” not of himself, he added.

“Opening his heart, the penitent confesses his sins, therefore, to God himself, and only God, through the ministry of the priest, absolves his sins,” Msgr. Nykiel wrote. That is why, as written in the Catechism of the Catholic Church (1467), the confessor can make no use of what the penitent has said, which “remains ‘sealed’ by the sacrament.”

The seal and secret of confession must be preserved by the confessor, an interpreter and anyone who in any way, even casually, comes to know of the sins confessed. Any Catholic who makes a recording of a sacramental confession or divulges it through the media can be subject to automatic excommunication.

The sacrament differs completely from other forms of professional secrecy such as doctor-patient confidentiality or lawyer-client privilege in which a patient or client can waive confidentiality. With confession, not even the penitent has authority to exonerate the confessor from the sacramental seal, Msgr. Nykiel wrote. The penitent also cannot compel him to testify in court about what he heard.

Cardinal Mauro Piacenza, head of the Apostolic Penitentiary, told participants at the 2014 conference that it is important “to dispel any suspicion” that the church’s commitment to the confessional seal “is designed to cover intrigues, plots or mysteries as people sometimes naively believe or, more easily, are led to believe.”

The existence of the seal of confession and the secrecy the church requires in its investigations of abuse allegations do not mean bishops or others are exempt from being vigilant or from acknowledging and reporting crimes to relevant authorities.

“The lack of vigilance, failure to report and the cover-up of cases of abuse cannot be considered in any way a ‘noted’ characteristic of the Catholic Church nor a consequence of the sacramental seal tied to confession,” Msgr. Nykiel told Catholic News Service Aug. 31. They are “a distortion, a criminal and perverse practice against Gospel principles conducted by individual members of the same church.”

The suffering and pain endured by so many people — victims of sexual abuse, abuse of power and conscience — “impel us to strongly condemn and fight this atrocious crime and do everything possible to guarantee the protection of minors,” he said in an email response to questions.

In a number of countries, “if bishops become aware of crimes committed by their priests outside the sacramental seal of confession, they are obliged to report them to the judicial authorities,” said then-Msgr. Charles Scicluna, now archbishop of Malta and president of a board of review handling abuse cases within the Congregation for the Doctrine of the Faith.

In countries where there is no legal obligation to report sex abuse accusations, he told a reporter, “we do not force bishops to denounce their own priests, but encourage them to contact the victims and invite them to denounce the priests by whom they have been abused.”

While a confessor cannot reveal what was said during confession, penitents can speak about what they know. Confessors may try to encourage, but never coerce, penitents to bring allegations or concerns forward.

A similar pastoral practice is involved when, during a sacramental confession, a penitent reveals she or he is the victim of domestic violence; in those cases, confessors should clearly condemn abuse and encourage the victim to consider what can be done in terms of preventing further harm to herself others.

Confessors cannot force penitents — whether victim or perpetrator — to inform outside authorities, and they must “resist the temptation to tell the victim what she must do or to insist that she act in a way she may not choose or before she is ready. This may be interpreted as another form of control,” according to the article, “Addressing Domestic Violence in the Sacrament of Reconciliation,” by U.S. Father Stephen Dohner of the Diocese of Cleveland.

If a person confesses to having committed abuse, the priest in the confessional — who is acting as a channel of God’s mercy at that moment — cannot order him to incriminate himself, but he should advise the penitent to seek appropriate help and to truly understand the consequences of his actions, Msgr. Nykiel told CNS. In the case of hearing an allegation from a victim, he said the confessor can strongly urge the person to report the abuse to the police or others, and provide the penitent with specific information about who to turn to.

“Confessors are not the masters of the sacrament of reconciliation, but ministers of mercy, therefore they cannot act according to their will, but must help the penitent in light of church teaching,” he said.

Confessors are expected to be Christ-like and “love the freedom of the penitent, to respect it” even when his or her choices are questionable, Cardinal Piacenza said.

“The confessor can only faithfully continue to show the way, to proclaim the truth, to sustain, above all with prayer and penance and then with every other useful and opportune means, the penitent’s choices,” never taking the penitent’s place, he said.

Maintaining strict secrecy safeguards the sacrament itself, which Christ established as a “sure gateway of salvation for sinners,” Msgr. Nykiel told CNS.

If the faithful, especially those most in need, who have recognized the gravity of their sins, could no longer be sure they were confiding only in God and no one else, they might no longer turn to the sacrament of penance, he said.

It is precisely because of this concern for the salvation of souls, he said, that the church imposes the severest canonical punishment on breaking the seal of confession, he said.

PREVIOUS: Bishops from Argentina join Spain and Peru in voicing support for pope

NEXT: Australian bishops, religious say seal of confession is sacred