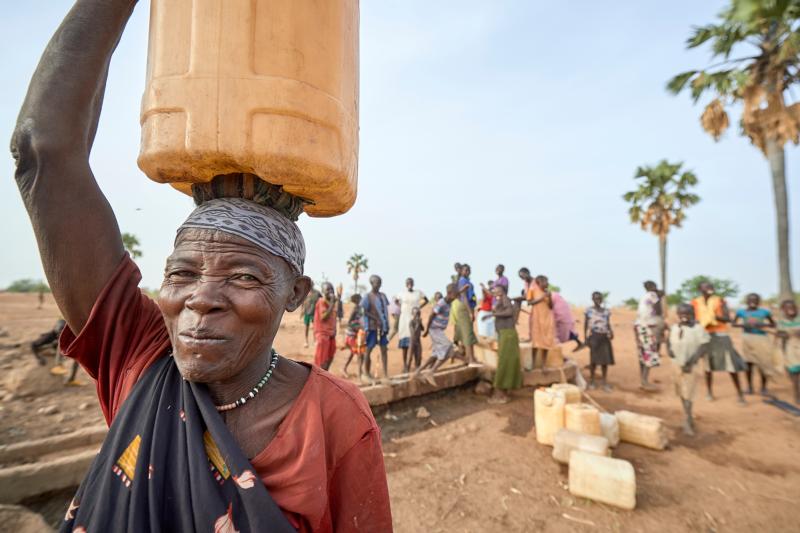 A woman carries water from a well in Lugi, a village in the Nuba Mountains of Sudan. (CNS photo/Paul Jeffrey)

NUBA MOUNTAINS, Sudan (CNS) — When Toma Konyono was a child, she was taught that women and girls should not eat eggs or chicken, that such protein-rich foods were better reserved for men.

It was a common belief in her village in the Nuba Mountains, where every night her family would listen to news on Radio Omdurman, an Arabic language station where all the broadcasters were men.

“When I was 10-years old, I told my father that when I grew up I was going to go on the radio and speak up for women,” she told Catholic News Service. “Women were being marginalized, girls were not being sent to school, and women were being beaten in the community.”

Her father told her she would need to go to school first, and he sent her off to study at a school in Kauda run by the Catholic Church. When Kauda was bombed by the Sudanese Armed Forces, Konyono ran home.

“My father sent me back to the school, telling me God would keep me safe,” she said.

Konyono persisted, eventually graduating, and for the past seven years her voice has been heard throughout the Nuba Mountains on Voice of Peace, a radio station in Gidel sponsored by the Catholic Church.

“Things have changed for women. They are awake. They can talk. They can eat the same foods as men. We have women teachers, women nurses, and I am representing women on the radio,” said Konyono, now 31.

“Over the air, I can talk to women in the villages tucked away behind the mountains. I can tell them they have equal rights. We do programs where we talk about women’s rights, where we advise men on how to discuss issues in a peaceful manner, and where we encourage girls to continue with their education and go on to become leaders in their communities.”

Comboni Sister Catherine Khamis said the church has helped Nuba women “recognize themselves as valuable members of the society, even when the society doesn’t recognize them.”

Sister Khamis, a native of Port Sudan on Sudan’s Red Sea coast, came to Gidel in 2011.

“My provincial told me she wanted me to work with women. I said I didn’t know what to do, so I would need to prepare. She said it wasn’t a matter of doing something, but rather of being with them, praying with them, encouraging them,” Sister Khamis told CNS.

“So when I came, I sat down with a group of women and started reading the Bible with them. After meeting for five days, one woman said, ‘Sister, enough of this. We want to work. We want to learn something so we can get ahead.'”

Sister Khamis said they learned together how to make soap. Then she found some old sewing machines on which the women learned to sew school uniforms they could sell to their neighbors. Some women started small businesses selling homemade juice or beer.

“And they told me that while they weren’t respected by their husbands before, once they started bringing income home, they got new respect both from their husbands and from others in their village. All of a sudden, many women wanted to come to the center and work.”

Rashida Ismael was one of those women, and today she’s the leader of the women’s group with which Sister Khamis works.

“We were nothing at home, but Sister Cathy brought all the women together. We made some clothes and sold them in the market. Some of the women had nothing and were very dirty, but as we worked together over the years, things changed. We’re better than we were before,” Ismael said.

“Now it’s unusual for a woman to be beaten, and when it happens now the police call the man to talk with him,” she added. “They bring the couple together and stop them from fighting again.”

Ismael said education has been a key component of change.

“Things changed quickly because people got educated. The bishop opened schools and we went to the schools and things began to change,” she said, referring to retired Bishop Macram Max Gassis of El Obeid, Sudan, who has long coordinated the church’s work in the Nuba Mountains.

“Before people just sent their boys to school, but today the girls go to school as well. All the girls working in the hospital today are our girls,” Ismael said.

Sister Mary Caroline Lawia, a Precious Blood nun from Kenya who coordinates a women’s center in Kauda, said resistance to educating girls still lingers, however, in part because some parents prefer to collect a bride price rather than invest in their girls’ education.

“Some girls tell me their parents won’t pay their school fees, so I go to talk with the parents. Some are cruel. They only care about cows. They cling to their animals, thinking that the more cows they have, the richer they are. I tell them they’ll get even richer by investing in their girls’ education,” Sister Lawia said.

Nuba women are pleased by a new law in the rebel-held enclave that any man who gets a girl who is a student pregnant must pay three times the normal bride price.

“I’m glad the law is there to condemn those who are destroying the girls,” Sister Khamis said. “Too many girls have to drop out when they get pregnant. So it has a deterrent effect.

“But even with the law, the girl still loses. The family gets the dowry, and they’re happy because all they care about are the cows. The man moves on to another girl. And the pregnant girl, what happens to her? If she doesn’t get an education, how is her life going to improve?”

NEXT: Nuba church ‘a sign of hope’ after staying through difficult times