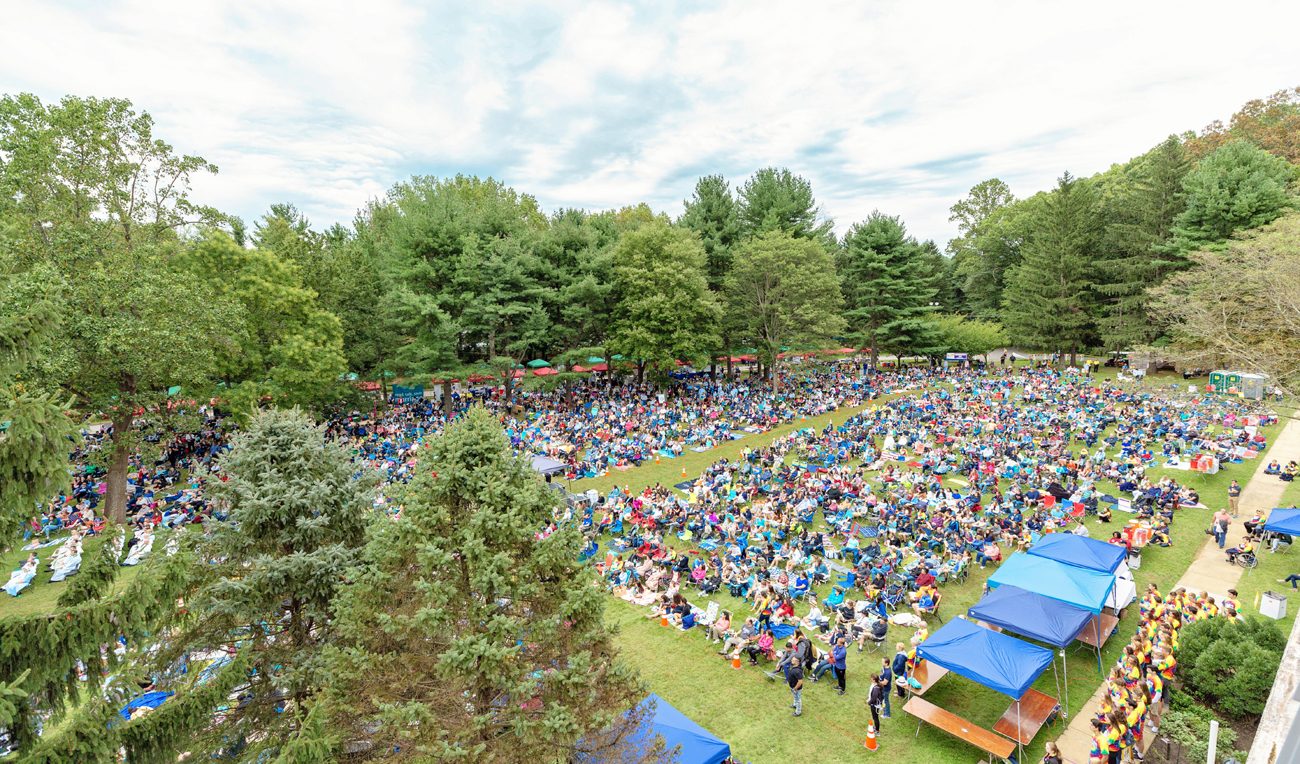 An aerial view shows the lawn at Daylesford Abbey filled with concertgoers at the 2018 Abbey Fest Faith & Music Festival in Paoli. (Photo by Michelle Kilgore)

Jesus must have been smiling down from the heavens on the beautiful grounds of Daylesford Abbey in Paoli as the fifth annual AbbeyFest took place Saturday, Sept. 22. The day-long festival billed as a celebration of “faith music and family” lived up to its title with performances from popular Christian bands and artists, games, food, confessions, an outdoor Mass and eucharistic adoration to conclude the event.

Attendance continues to grow every year and this year a crowd of more than 4,000 came out to participate, according to organizers.

“Each year AbbeyFest has been better than the previous year in terms of Catholics and Christians attending and the quality of artists we’ve been able to feature,” said Mark Christmyer, communications director at St. Norbert Parish, which was one of 28 local sponsors including CatholicPhilly.com.

(View our photo gallery of scenes from AbbeyFest here.)

Performer and songwriter Matt Maher returned for his fifth visit to Paoli and headlined the list of musical artists. Other returning performers were Osborne Brothers Band (OBB) and Fire Hill Worship along with several new guests this fall: Building 429, 7eventh Time Down and The Rhett Walker Band.

They were joined by keynote speaker Oscar “Two Ten” Rivera. Performances by the artists have helped bring the surrounding communities together for AbbeyFest.

“AbbeyFest has become more popular along with these artists’ followers,” said Christmyer.

“We’re pumped to have you all here for the fifth annual AbbeyFest,” he told the cheering crowd. “It’s great to be together.”

“Praised be Jesus Christ now and forever,” he said. “Bless us all, touch our hearts so that we can glorify you. May your blessing be upon us all.”

There was more to the day than music. With plenty of space on the grounds, people had the opportunity to play games including pick-up football, ultimate Frisbee and keep-away. Young children enjoyed face painting and tattoos.

Father Steven DeLacy, vocation director for the diocesan priesthood, and the seminarians of St. Charles Borromeo Seminary played in a soccer game.

There were many religious vendors on hand to promote their parish, Catholic school and other religious organizations. Among them was Tom Ramsbottom of Love Saves Lives, a Lancaster County organization reminding that all lives matter. It was his first AbbeyFest and he hopes to return next year.

Metanoia Young Adults, a Montgomery County group for Catholic adults mostly in their 20s and 30s, was there hoping to recruit new participants.

“It’s a great way for evangelization,” said Drew Hashimura, a member of Metanoia.

Many high schools require students to perform hours of community service, so teens took the opportunity to volunteer at AbbeyFest. Christina Christian, a freshman at Woodlynde School in Strafford and a member of St. Peter Parish in West Brandywine, has attended the festival each year. In addition to volunteering this year, she was joined by several of her friends who came for the first time. 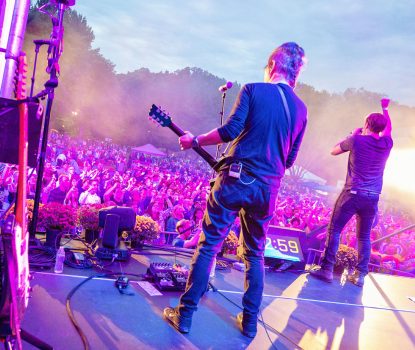 “I’ve always loved this place,” said Christian. “You get Catholic friends together. We’re here to see and serve Christ.”

Maggie Kelly, Caitlin DeStefano and Michelle Forrest, all juniors at Bishop Shanahan High School and members of SS. Philip and James Parish in Exton, came together. This marked Kelly’s second time at AbbeyFest but it was a first for DeStefano and Forrest.

“This is one of the best things to experience at the beginning of the school year,” said DeStefano.

Ample food trucks kept everyone nourished and water was provided free of charge.

AbbeyFest is a traditional family affair for Jen Devine and her daughters from St. Patrick Parish in Malvern and they volunteered their time in the tent for sponsors.

Her sister Molly, an eighth grader at St. Patrick, was impressed by the music, the energy and the overall atmosphere of AbbeyFest.

Everyone was encouraged to receive the sacrament of reconciliation and plenty of priests were on hand to hear confessions. There were also prayer teams for the intentions of those in attendance.

Michaela Walsh, a junior at Villa Maria Academy who is active in youth ministry, was enthralled by the opportunity to go to an outdoor confession with music from the concert in the background.

“I don’t know anywhere else you can do that,” she said. “I was gleaming. I’m so happy to be here.”

A large outdoor liturgy was celebrated in the evening on the field nearby the abbey church, with Abbot Rossi presiding and about 20 priests concelebrating. During his homily, Abbot Rossi talked about how when we pray, it is not always done the right way.

The church at this time also needs healing and new life, and Abbot Rossi reminded everyone that new growth in the church can take place.

“Miracles can and do happen,” he said. “Nothing is impossible.”

During the presentation of the gifts, a collection was taken up to help offset the cost of AbbeyFest, as the congregation sang the hymn, “O Praise the Name.” 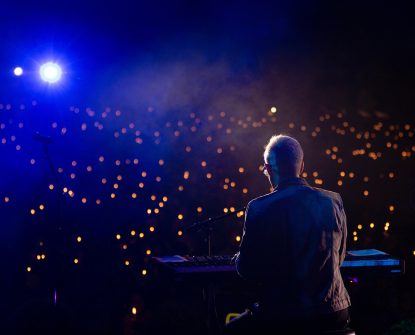 Following Communion, novices and seminarians were called to the altar for a special blessing as they prepare for the priesthood and consecrated life. They were joined by dozens of young men and women who also believe they may be called to pursue a religious vocation.

“The church needs priests who are completely in love with the Lord,” said Abbot Rossi. “If God is calling, God will give you the grace you need.”

The evening ended with eucharistic adoration lit by the candle lights of the participants sitting under the stars.

At the concluding benediction of the Blessed Sacrament, Maher reprised his traditional grand finale with one of his greatest hit songs, “Lord, I Need You.” 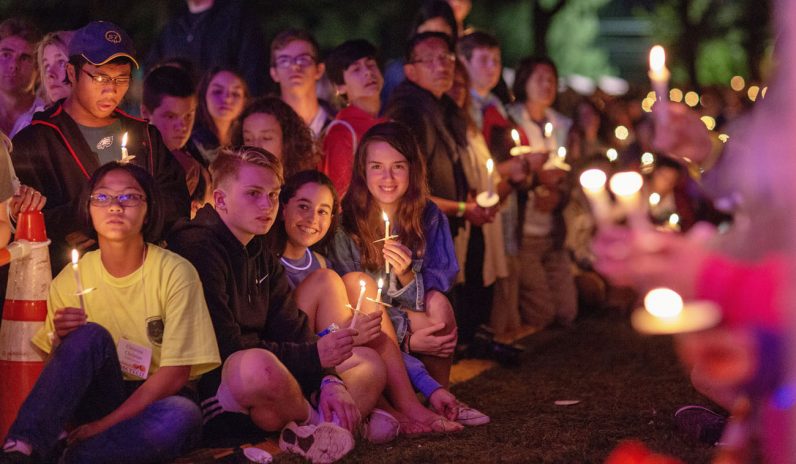 Teens enjoy prayers by candlelight at AbbeyFest on the grounds of Daylesford Abbey, Paoli. (Photo by Michelle Kilgore)

PREVIOUS: 3,000 expected under the big top at Malvern Retreat House