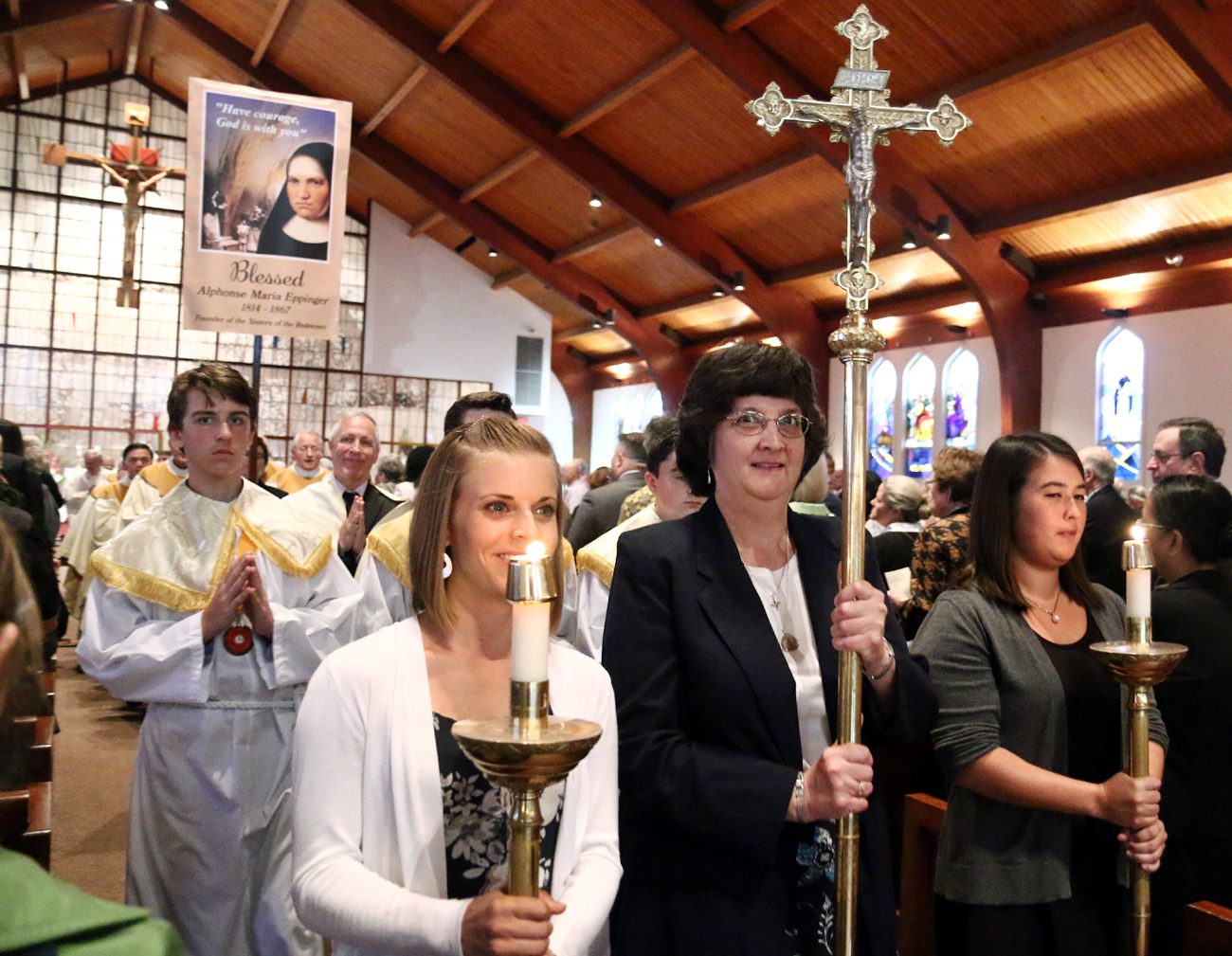 Members of the Redeemer Ministry Corps and Redeemer Associates lead the procession after a Mass of Thanksgiving for the beatification of the order's founder, Blessed Alphonse Maria Eppinger, Sept. 23 at St. Albert the Great Church, Huntingdon Valley. (Sarah Webb)

Elisabeth Eppinger, a devout young woman born in the early 19th century in the village of Niederbronne in Alsace-Lorraine (present-day eastern France) could not have dreamed that someday she would be recognized for her sanctity and good works by the universal church and officially beatified on Sept. 9, the last step before sainthood.

Her voluntary ministry of caring for the poor and sick in their homes attracted other like-minded women and in 1849 a new congregation, the Daughters of the Divine Redeemer, came into being with Elisabeth, as Mother Alphonse Maria Eppinger, as the first superior.

The congregation spread to other countries under variations of their original name, including Sisters of the Most Holy Savior and Sisters of the Divine Redeemer, here in Philadelphia.

The sisters in Philadelphia trace back to Germany with the motherhouse in Wurzburg, explained Sister Anne Marie Haas, the Meadowbrook-based provincial leader. Locally they were known as Sisters of the Holy Redeemer and now simply Sisters of the Redeemer.

Sister Anne Marie is herself a Philadelphian, formerly of St. Leo Parish and a graduate of St. Hubert High School.

On Sept. 9, local members of the congregation and their friends watched the telecast from Strasbourg Cathedral where Mother Alphonse Maria, who died July 31, 1867, was formally declared Blessed Alphonse Maria Eppinger at a Mass presided over by Cardinal Giovanni Angelo Becciu, the prefect of the Congregation for the Causes of Saints. Her feast day will be observed on Sept. 9, which was also the date of her birth in 1814.

In the Archdiocese of Philadelphia, the Sisters of the Redeemer also celebrated the beatification of their founder with a Mass celebrated at St. Albert the Great Parish.

The original work of the congregation as established by Blessed Alphonse Maria was in grassroots health care in the home, and health care remains a large part of their work.

Their founder “was herself a sickly woman,” Sister Anne Marie said. “She realized what it was to be sick and to feel the burden. She really could see the suffering Christ in sick people.

“In Germany and Tanzania we are teachers. Here we have health care, social service and some teaching,” Sister Anne Marie said.

While today’s sisters are generally college trained, in the beginning that was not so. Blessed Alphonse Maria herself had only a barely fundamental formal education.

“One of the most attractive things about her was her simplicity,” Sister Anne Marie suggested. “I think that has attracted every one of us who has come to the community. In her simplicity she reached out to the poor, the poor in spirit and the psychologically poor. Today, meeting people where they are and the simplicity of the sisters is the nature of the congregation. What we hope to bring to others in our ministry is based on her spirituality.

“She had a really deep relationship with God and she was called not to join a congregation but to found one. She began with home care because there were no hospitals then. She reached out to people no matter what their faith. The second family she tended to was Protestant and the man was dying. His wife could not believe she was doing that for them. Redemptive love is part of our mission.”

For herself, Sister Anne Marie encountered the Redeemer Sisters at a very young age.

“I always wanted to be a sister,” she said. “When I was 15 a friend invited me to a retreat with the Redeemer Sisters. I wasn’t anxious to go but she coaxed me. I was 15, and I fell in love as soon as I walked in the door. They were so pleasant and welcoming. I can’t explain why, I just knew this was the place for me.”

Through the archdiocese and Cardinal Dennis Dougherty, the first Redeemer Sisters came directly from Wurzburg in 1931. The first ministry was nursing at the Drueding Infirmary, a free hospital for the 700 workers at the Drueding plant, which processed chamois cloths. When the plant closed, the Drueding family gifted the infirmary to what is now Project Rainbow, a shelter for mothers with children.

For 40 years the sisters also provided nursing and some housekeeping at St. Charles Borromeo Seminary. At this time their most prominent ministry is the Holy Redeemer Health System and St. Joseph Manor in Meadowbrook.

They are also active in home health care in New Jersey, and some sisters are involved in social services and education.

“Our primary mission is to be a healing presence through the works of mercy,” Sister Anne Marie said.

While Sister Anne Marie is a Philadelphian by birth, most of the other sisters are not.

Sister Anita Bolton, for example, started life on a Lancaster County dairy farm and was introduced to the congregation through a lay group, the Redeemer Ministry Corps, in the 1980s. She draws her inspiration from their founder.

“Mother Alphonse exemplified the simplicity and beauty of a faith-filled life that witnessed the redeeming love of Jesus in our world,” she said. “Her life inspires me to draw life from the springs of the Redeemer and to share his love and mercy with others with a caring and understanding heart.”

As with most congregations of religious in this generation, religious vocations are not plentiful and the future may well be in the hands of lay associates.

“From the beginning we have had a close relationship with the laity,” Sister Anne Marie said. “Now in a formal way through education and formation of the laity for Catholic health care ministry.”

Kim Fitzsimmons, who has worked for Holy Redeemer Health Care System for 30 years, is an example of that.

“Through those years we all learned of Mother Alphonse Maria Eppinger and how to go out into the homes and care for people where they are the most comfortable,” she said.

The work of Blessed Alphonse Maria Eppinger continues, and the future may well be as she began it: dedicated Catholic lay women performing the corporal and spiritual works of mercy.