Hundreds pray at Cathedral for healing of sex abuse crisis 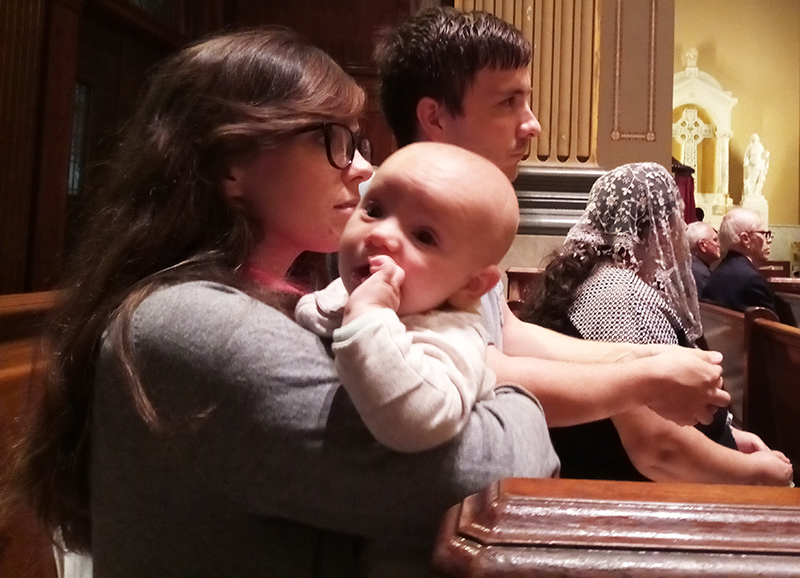 Kevin and Sarah Leopold of St. Francis of Assisi Parish in Springfield, Delaware County, attend a Sept. 14 prayer vigil with their son Ambrose at the Cathedral Basilica of SS. Peter and Paul. The archdiocesan gathering was organized in response to recent clerical sexual abuse scandals. (Photo by Gina Christian)

Several hundred participants gathered at the Cathedral Basilica of SS. Peter and Paul on Sept. 14 for a prayer vigil organized by the Archdiocese of Philadelphia in response to the ongoing clerical sexual abuse crisis.

The seven-hour event, entitled “Have Mercy on Us, O Lord,” centered on both communal and private prayer during an evening of eucharistic adoration. Father Dennis Gill, director of the archdiocesan Office for Divine Worship, presided over the vigil, which began at 5 p.m. with solemn exposition of the Blessed Sacrament and ended with benediction at midnight.

Attendance averaged between 100 and 125 at the beginning and end of the vigil, swelling to approximately 400 from 7 to 9 p.m.

Each hour of the gathering began with a hymn, followed by a Gospel reading and the prayer to St. Michael, an invocation for divine protection originally composed by Pope Leo XIII. The litany of the saints was also recited, along with prayers for deliverance from sin and evil.

Most of the evening’s Scripture readings focused on Christ’s passion and death; Psalm 51, one of the church’s most widely used penitential psalms, was sung during the vigil’s third hour.

The sacrament of reconciliation was available throughout the service, which was designed as “a prayer vigil of reparation and petition,” according to Father Gill.

“The members of the church, the body of Christ, are in real pain from sexual abuse, the failure of leadership and the sense of betrayal,” he said. “We need healing. Many things are required for this healing, and one of those things is for Catholics to come together and pray.”

In particular, prayers were offered for “all sins of sexual abuse and sexual immorality, especially by members of the Catholic clergy,” as well as “all sins of cowardice, deception, sloth and self-protection, especially among those in positions of authority in the church,” according to the official announcement for the vigil.

Petitions sought healing for sexual abuse victims, and for a purification and revitalization of both individual believers and the church as a whole.

In a statement to local media, archdiocesan spokesperson Kenneth Gavin said that “as a Catholic faith community, prayer and a personal relationship with Jesus Christ is central to all that we do.”

At the same time, he added, prayer is “only one aspect” of the archdiocesan response to the “societal scourge of child abuse.”

Four counselors from the archdiocese’s Office for Child and Youth Protection (OCYP) were on hand from 7 to 8 p.m., along with two additional counselors from the Keystone Crisis Intervention Team, part of the Bucks County based Network of Victim Assistance.

“We are looking to connect survivors with the support they need,” said Leslie J. Davila, OCYP’s director. “We also recognize that lay Catholics who were not abused may still be looking for counseling to cope with this crisis, and we can connect them with services. We don’t turn away anyone.”

Attendees included a mix of laity, clergy and religious from throughout the archdiocese. More than 50 members of the Sisters, Servants of the Immaculate Heart of Mary congregation attended, having been encouraged by their leadership team to make a holy hour at the gathering. 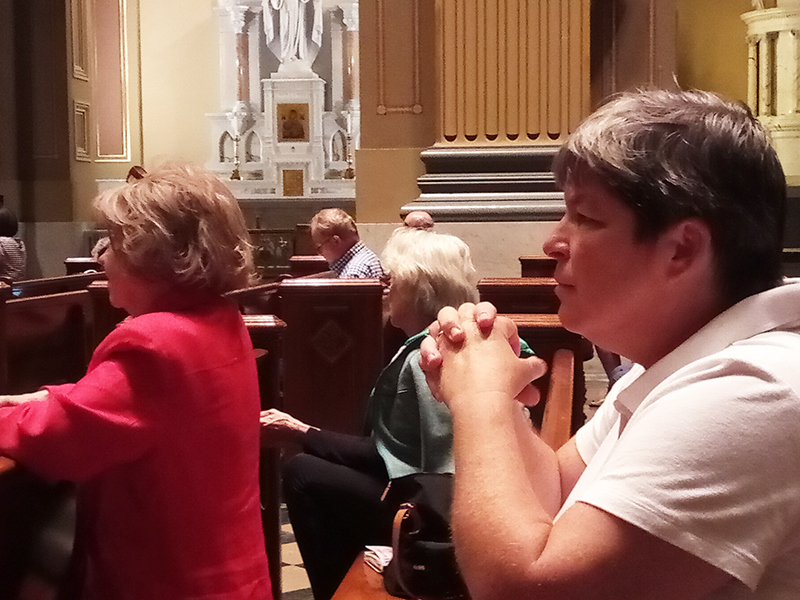 Sr. Marie Bernadette Taraschi, IHM, prays at an archdiocesan vigil held Sept. 14 at the Cathedral Basilica of SS. Peter and Paul in response to the clerical sexual abuse crisis. More than 50 members of the IHM congregation attended the gathering, joining several hundred clergy, religious and laity. (Photo by Gina Christian)

“We wanted to show our solidarity and to participate in prayer for all who are hurting,” said Sister Mary Ellen Tennity, I.H.M., general superior of the congregation.

She added the order had also organized a separate holy hour earlier that afternoon to accommodate senior members who could not travel to the cathedral.

Terence Sweeney and Jessica Ferro, both of St. Francis de Sales Parish in West Philadelphia, said the vigil offered a constructive outlet for their grief and outrage.

“It gives us the opportunity to come together and to actually bring things to the Lord instead of just dwelling on them,” said Ferro, who serves as the program and communications coordinator for the Collegium Institute, a Catholic intellectual foundation based at the University of Pennsylvania.

Sweeney added the gathering should serve as a model for similar services throughout the archdiocese.

“The cathedral is the place where leadership is supposed to radiate out,” he said. “I think our parishes should host these vigils too.”

Father Thomas Higgins, pastor of Holy Innocents Parish in Philadelphia, said he hoped “to offer this moment up to the Lord and ask God to help heal our broken, wounded church.”

Noting that he felt “a mixture of anger and sadness” in response to the abuse scandals, Father Higgins said that the prayer vigil was just the start of the longer healing process.

“One night of reparation is a beginning, but there’s more to be done,” he said. “I think some priests and bishops have neglected their responsibilities, and I just think we have to own that.”

Father Higgins added that despite the failings of fellow clergy, he was still “proud to be a priest.” He credited his clerical support group with helping him and his fellow priests meet the challenges of ministering during the ongoing crisis.

“I’m a baptized individual; I’m not going to go anywhere,” he said. “This is my life.”

Several seminarians in attendance expressed their support for all those affected by clerical abuse.

“I was inspired by seeing so many people, whose own crosses are heavy enough, pick up the cross of those who have fallen, and also accompany victims in the midst of inexplicable pain,” said Andrew Auletta, who is now in formation at St. Charles Borromeo Seminary in Wynnewood.

Bishop Timothy Senior, rector of St. Charles, noted that the seminary’s community is “keeping the needs of victims of abuse uppermost in our prayers.”

The vigil drew one protestor, who stood facing the cathedral’s front doors with a poster of a young man’s face. The gentleman declined the opportunity to speak with CatholicPhilly.com.

Phong T. Le, a seminarian who stayed until the conclusion of the vigil, said that the evening had imbued him with a sense of the Lord’s presence.

“I have a feeling of hope that God will purify our church,” said Le.

Father Gill stressed that the vigil was ultimately an expression of confidence in Christ.

“This prayer is not a camouflage to distract from the evil and sin that surround us,” he said. “Jesus is with us through all of this. He will not fail us, and we cannot fail him.”

For more information on the Archdiocese of Philadelphia’s response to clerical sexual abuse, including a statement from Archbishop Charles J. Chaput, visit the website A Pledge to Protect.

Also see information on the Archdiocese of Philadelphia’s Office of Child and Youth Protection, including Victim Assistance Services, the staff of which may be contacted at 215-587-3880 or 888-800-8780, or email philavac@archphila.org.

To report abuse by a clergyman, staff member, or volunteer of the Philadelphia Archdiocese, call the Office of Investigations at 888-930-9010 and your local law enforcement agency.