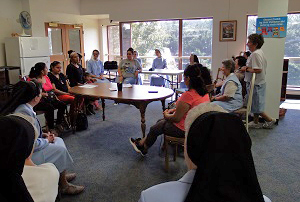 Sisters Servants of the Immaculate Heart of Mary, who run the IHM Family Literacy Center in Coatesville, meet with clients at the center Sept. 6, when its was blessed.

Leadership of the Sisters Servants of the Immaculate Heart of Mary, along with staff, friends and women who are served, helped break in the new quarters for the IHM Family Literacy Center at 139 Modena Road in Coatesville on Sept. 6, as Father Matt Guckin led the formal blessing rite.

In his remarks, Father Guckin spoke on the Gospel for Catechetical Sunday — celebrated this Sunday, Sept. 16 — taken from the Gospel of Mark.

“Jesus took his apostles for a little retreat to Caesarea Philippi in Northern Israel,” he explained. “That’s what the Family Literacy Center is like. It is a very beautiful place, very rich and lifegiving.”

The Literacy Center, a ministry of the IHM Sisters, was established in 2002 in St. Joachim Parish, Philadelphia, followed by the campus of St. Joseph Parish in Coatesville, and just recently its new location.

It serves immigrant Hispanic women and their young children and is virtually unique among social outreach programs in that is doesn’t receive a dime from the any governmental sources, federal, state or local. It depends entirely on funds received from the IHM Sisters and private benefactors.

It’s a full-time ministry for Sister Bernadette Heistler, the director, and Sister Jean Hennelly, who teach the mothers and for Priscilla Clouser who teaches the toddlers and preschool children. They are also assisted by a dedicated group of volunteers.

(Read a commentary on this program as how it coincides with Catechetical Sunday, here.)

“At this time we have 21 mothers and nine children aged 3 to 5,” Sister Bernadette said. All of the current women are immigrants, mostly from Mexico, but also Ecuador, Venezuela, Colombia and El Salvador, she explained.

Both sisters are well suited for Hispanic ministry. Earlier in her career Sister Bernadette was missioned to Chile, and Sister Jean taught in a parish school with a large Hispanic population.

Most of the women served are young mothers relatively new to the U.S. While overwhelmed at first, during the program they blossom. As the name implies, a first priority is teaching English so that the young mothers will be able to do such chores as shopping, participate in meetings with their children’s teachers or doctor appointments, all of which can be daunting for non-English speakers.

“But we also teach life skills, (such as) how to run a household, parental support classes and how to be a leader in the family as the primary educator of their children,” Sister Bernadette said. “When we meet them they are so isolated and afraid. They become very confident.”

Women who come to the center are not required to be Catholic but the program does include a bit of Catholic faith formation too.

As for the little children who are taught by Clouser, the great emphasis is placed on English language skills so that when they transition to school they will not need an English intervention program. That’s the satisfaction for her: “Helping the little babies fit in when they go to a regular school,” she said.

“I would say 90 percent of the children will go right to grade school without need for intervention,” Sister Bernadette said.

Although the program focuses on women and children, the sisters do home visitation also, really to assess the family situation and get to know the husbands. In most cases they are very supportive of what their wives are doing, but there have been instances where the husband did not want his wife to learn, Sister Bernadette observed.

But this is a rarity, and on the recent relocation of the office, even though the moving was done by a moving company, husbands came and helped with the cleanup, packing, unpacking and setting up. 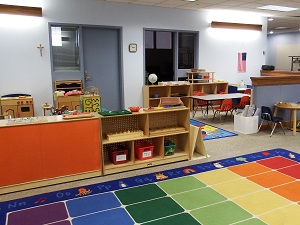 Children learn essential language and cultural skills in a bright environment at the IHM Family Literacy Center, run by the Sisters Servants of the Immaculate Heart of Mary in Coatesville.

Typically women who come to the program will stay about four years, five at the most, by which time they have been taught all that the sisters can give them. They are more than ready to face the world in their adopted land by the time they are done.

Isaura, a mother of two, was very shy when she first came to the Family Literacy Center.

“Now she has gotten her GED. She is wonderful with her parenting skills, she works in a restaurant as she speaks perfect English and translates for us,” Sister Bernadette said.

Isaura believes the Literacy Center was the best thing that ever happened to her. “It has changed my life physically, emotionally and spiritually,” she said.

That is the only reward the sisters desire.

“I would say the greatest thing is to see these young women become strong, confident leaders in the family and the church,” Sister Bernadette said.

“The satisfaction is being able to help God’s people,” Sister Jean added.

Donations for the program can be sent to IHM Literacy Center, 139 Modena Road, Coatesville, PA 19320.

NEXT: Hundreds pray at Cathedral for healing of sex abuse crisis