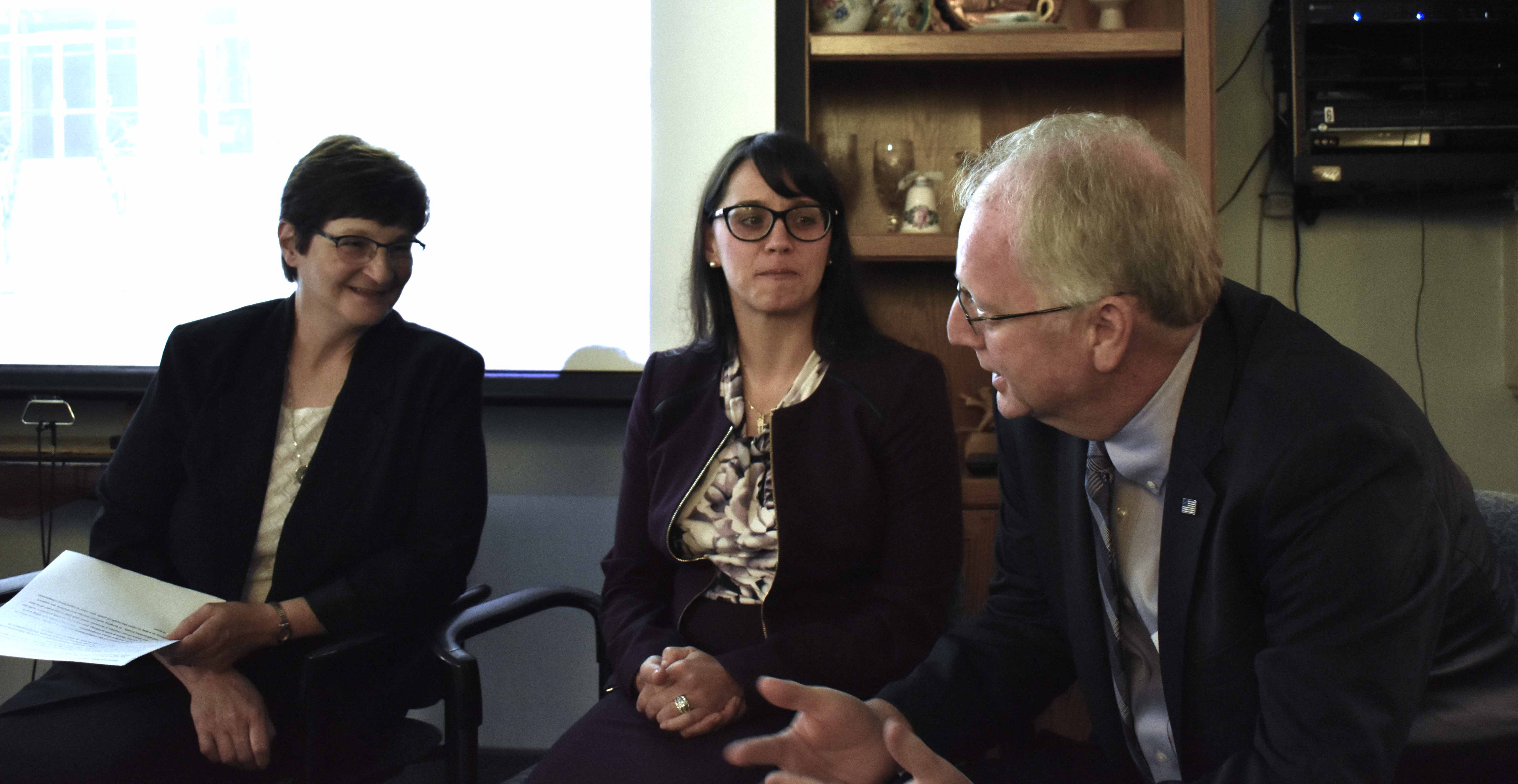 Brooke Tesche, center, diocesan deputy superintendent of secondary education and special education, meets with Sister Bonnie Brown, left, and John Finnegan, Hanover Township, Pa. supervisor, at the St. Francis Center for Renewal in Bethlehem, Pa. before announcing the formation of Kolbe Academy. Set to open in fall 2019, the academy will be the first U.S. Catholic high school for students in addiction recovery. (Photo by John Simitz / The AD Times)

The Diocese of Allentown will set a national precedent in fall 2019 by establishing a Catholic high school for students in recovery from substance abuse.

Calling Kolbe Academy “a great blessing,” Bishop Schlert said that the Allentown diocese recognizes the suffering that addiction has caused to area families.

The school, which will be accredited by the Middle States Association, is set to serve 90 students in grades 9 through 12. Along with theology, history, English, math and science, the faith-based curriculum will include individual, group and family drug and alcohol counseling.

Tesche noted that Kolbe Academy will fill a gap in current educational options, which are insufficient for students battling substance abuse.

“Our children with drug and alcohol addictions need something different,” said Tesche. “This is the next natural step for our diocese to give high school students in this region the education and support they need to succeed.”

Tesche added that students in recovery have only a 20 percent chance of remaining sober when they return to school, a statistic that underscores the need for a place like the Kolbe Academy. 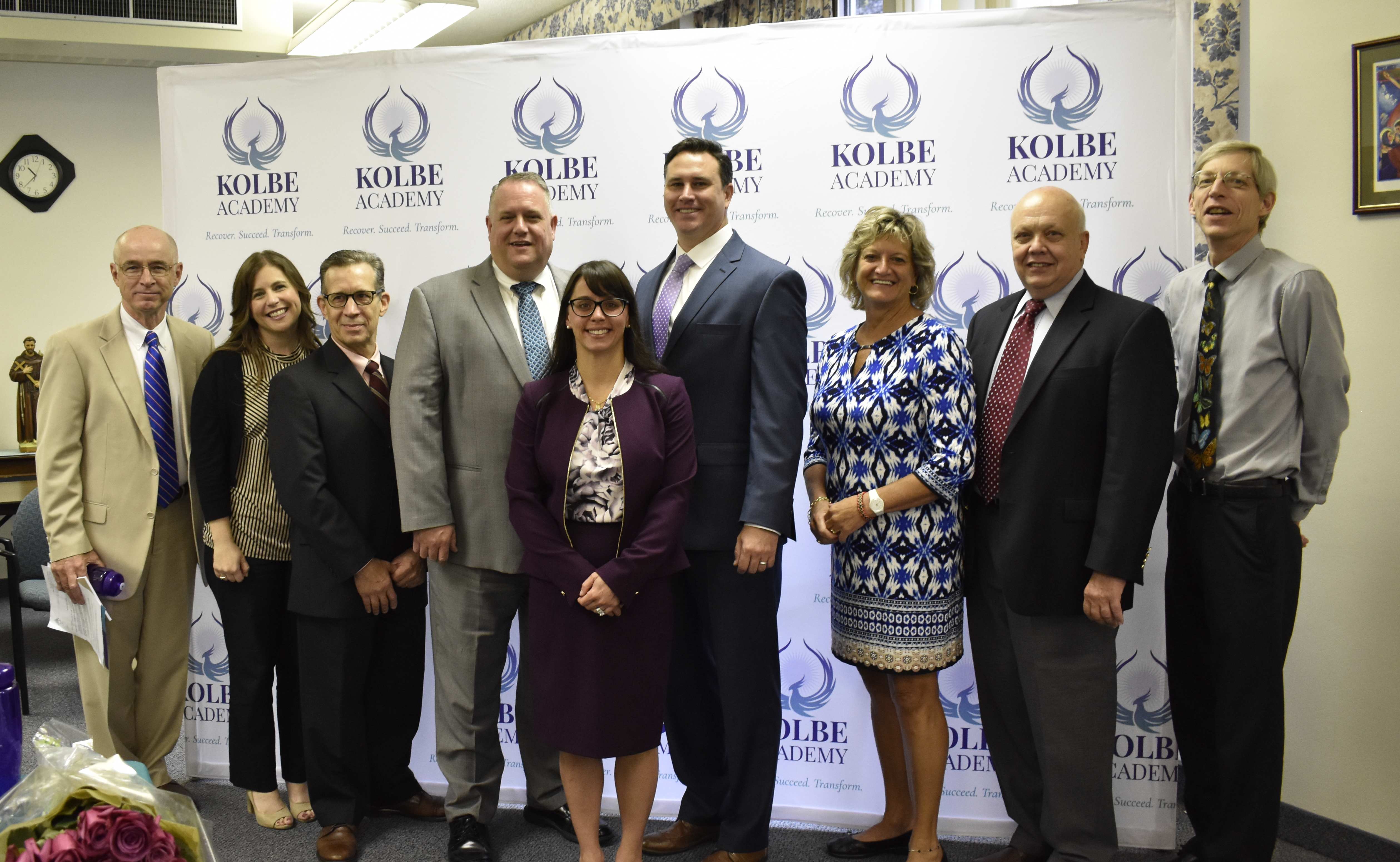 Advisory board members for the Kolbe Academy stand before the logo of the Bethlehem, Pa. school, set to open in fall 2019. The academy, an initiative of the Diocese of Allentown, will be the first U.S. Catholic high school designed for students in addiction recovery. (Photo by John Simitz / The AD Times)

“Faith is the critical element for their success. A key element in recovering is surrendering,” she said. “We can talk about it and explore it in a Catholic high school,” she sa

Tuition to attend Kolbe will be an estimated $16,000, a fee comparable to that for a 28-day addiction treatment program. The diocese expects to establish financial aid and scholarships to assist with tuition.

“Our goal is to do whatever it takes to give them the services they need,” said Tesche.

In addition, Tesche said, students must first be sober for 30 days, and both students and families must be committed to recovery before enrolling in the academy.

“Few get an opportunity like this,” Petruzelli said. “I intend to work hard bringing about change in the lives of my future students.”

The logo for Kolbe Academy is a phoenix, a legendary bird that has been an ancient symbol of rebirth. The academy is named after St. Maximilian Kolbe, the patron saint of those struggling with addiction, as well as of prisoners and pro-life causes. Kolbe was a Polish Conventual Franciscan friar and a martyr in the German death camp at Auschwitz during World War II.

St. Maximilian Kolbe, who actively promoted Marian devotion, is also known as the apostle of consecration to Mary. The academy will be dedicated to him and placed under the protection of the Blessed Mother next fall.

This story appeared in the Sept.  20 edition of The AD Times, the newspaper of the Diocese of Allentown, and appears here, along with accompanying photos, by permission.

NEXT: Relief collection invited for hurricane-flooded areas of Carolinas