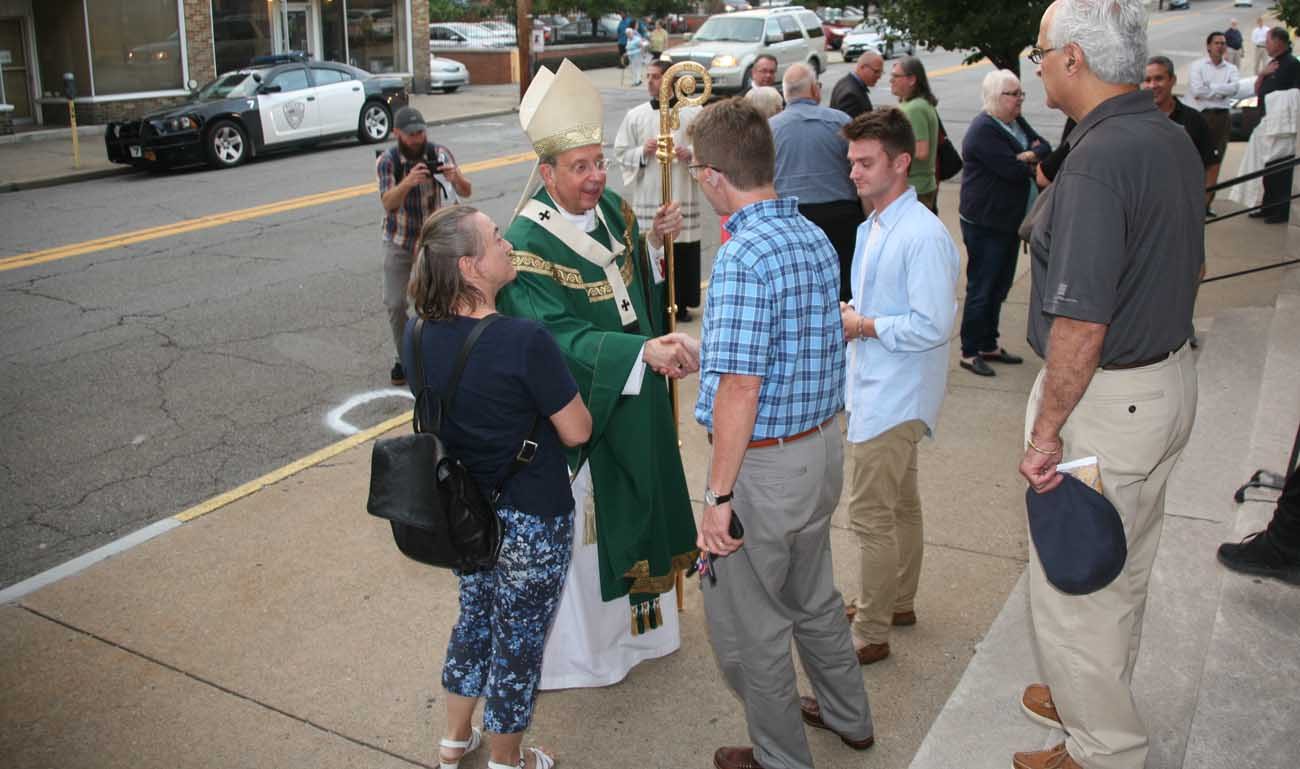 WHEELING, W.Va. (CNS) — In his celebration of Mass at the Cathedral of St. Joseph in Wheeling Sept. 15, Archbishop William E. Lori of Baltimore said he will be with the Catholics of West Virginia on the journey to “healing and reconciliation.”

The Mass was streamed live on the Diocese of Wheeling-Charleston’s website and televised the next morning to many parts of the state. Concelebrating the Mass were area priests.

The Mass culminated the archbishop’s visit to Wheeling during which he met with diocesan staff after Pope Francis accepted Bishop Michael J. Bransfield’s resignation as bishop of the Diocese of Wheeling-Charleston and then appointed Archbishop Lori apostolic administrator of the diocese.

The pope also instructed the archbishop to conduct an investigation into allegations of sexual harassment of adults against Bishop Bransfield.

“It will my duty, privilege and joy to serve as your shepherd — to care for you as members of the Lord’s flock and to journey with you toward healing, reconciliation and a hopeful future,” Archbishop Lori said. “We have all been jarred by the news regarding Bishop Bransfield, in particular, the allegations of sexual harassment of adults leveled against him, allegations which must now be carefully and fairly investigated.

“I assure you that this investigation will begin promptly and, while I have been asked to oversee it, it will actually be conducted by competent laypersons with the necessary skills,” he continued. “The goal of this investigation is to arrive at the truth and justice for the good of individuals involved and for the common good of the church we love.”

The archbishop then addressed the wider and ongoing sexual abuse crisis in the church, noting the scandal surrounding Archbishop Theodore E. McCarrick, former cardinal-archbishop of Washington, and the Pennsylvania grand jury report, which has “created a crisis of trust.”

“You rightly ask what will be done, what will be different and what is in place to prevent such terrible things from happening again,” he said.

“And while it will take some time to get to the bottom of troubling questions and to put into place an across-the-board plan of action,” Archbishop Lori said, “I can report that deliberations between the pope and the American bishops are well underway on ways to hold bishops accountable for their own misconduct and for failing to deal properly with allegations of abuse.

“As proposed, these initiatives would call upon the leadership and expertise of the laity. It is my hope and prayer that such measures will be implemented as quickly as possible.”

In the meantime, Archbishop Lori said, there are things that can and are being done in the diocese such as ensuring that seminarians receive a sound priestly formation; continuing the diocesan policy of fully and transparently cooperating with all levels of law enforcement; continuing to seek the direction of the Independent Lay Review Board so as to strengthen diocesan policies for the protection of children; and rooting out anyone who may threaten the innocent and vulnerable.

“Above all, the archbishop said, “I pledge to reach out to anyone who has been harmed by a representative of the church, whether cleric or layperson in the hope of bringing some measure of comfort, healing, and closure.”

He then emphasized work being done in parishes, schools and other ministries for the protection of children and young people such as implementing mandated policies designed to protect the vulnerable, background checks, fingerprinting, and training for clergy and laity, as well as for volunteers who work with young people. All allegations, he noted, are reviewed not only by the diocese but also by an Independent Lay Review Board.

“But with all of that said, we cannot forget that we have a long, long way to go,” Archbishop Lori said, “to achieve healing and reconciliation — but it is a journey I wish to make with you.”

“Even as I continue to shepherd the Archdiocese of Baltimore,” he said, “I shall do my best with your prayers and the help of God’s grace, to be God’s humble instrument of healing, reconciliation, and stability as we prepare the way for a new bishop and for a future full of hope.”

Following the Mass, Archbishop Lori greeted the faithful as they exited the cathedral.