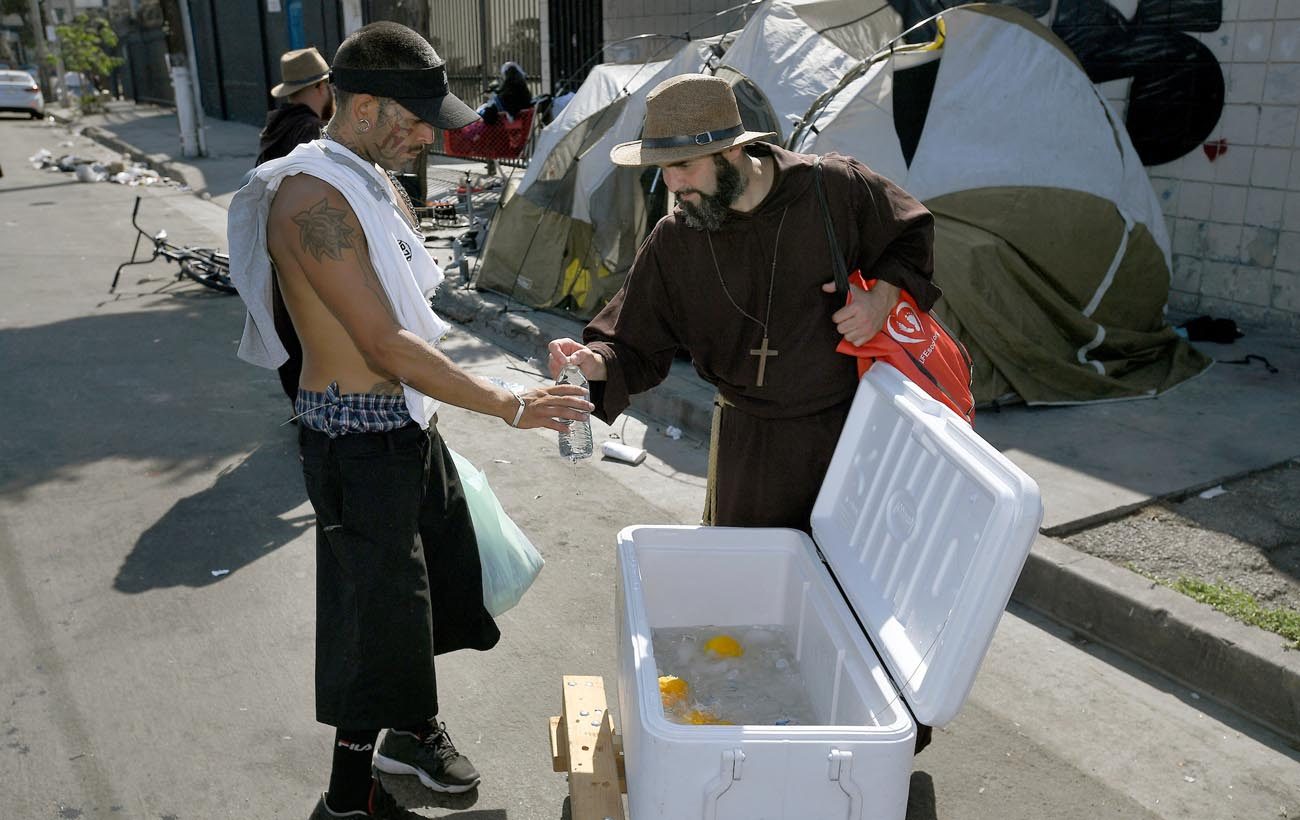 Brazilian Friar Benjamin of the Most Holy Trinity gives water to a man on Skid Row in Los Angeles Aug. 18. (CNS photo/John McCoy via Angelus News)

LOS ANGELES (CNS) — Friar Benjamin of the Most Holy Trinity walked down Towne Avenue in Skid Row, one hand wheeling an ice chest filled with oranges and bottled water, the other clutching plastic bags of peanut butter and ham and cheese sandwiches, chips and fruit snacks.

Dressed in a full habit, a straw hat and brown flip-flops, Friar Benjamin, 42, along with three other friars, one religious sister and three volunteers, shouted, “Cold water! Free food!” as they made their way along the tent-lined streets in 90-degree heat.

They moved slowly, taking time to talk with people about their lives and to ask if they need a prayer. Tyrone Tankins, who has lived on Skid Row for eight months, asked them to pray for his sick grandmother. Even though he survived cancer and a gunshot wound, he said, it’s his grandmother who needs help.

“I’m worried about her,” he said. The group gathered in a circle, joined hands with Tankins and prayed with him.

A woman requested a prayer for her car to be fixed. A man asked to sing for them.

By the time they finished circling the block they had given away all their food and water, even the ice from the cooler. Together with another team of friars, nuns and volunteers, which walked a different block, they distributed 400 sandwiches to 200 homeless people in a single Saturday afternoon.

“It takes tenacity and compassion to do this,” said Jedobby Joriday, who lives on Skid Row and received food from the friars and sisters in August. “It’s not the grandeur of the things that you do, it’s the minute things, like if you answer a call for help.”

Friar Benjamin is a member of the Friars and Sisters of the Poor Jesus, a religious order founded in Brazil with the mission to minister to the neediest and most marginalized members of society.

After Los Angeles Archbishop Jose H. Gomez invited the order to the city earlier this year, a band of four friars and four sisters have set out for Skid Row every weekend, in hopes that free sandwiches and bottled water will be the first step in lifting the city’s growing homeless population out of poverty and despair.

“We’re trying to address not only the homeless situation, but also the problems we have as a society when we neglect the spiritual side,” said Friar Benjamin, who is from Brazil. “We have no illusions that we’re going to solve it completely, but this is what we need to rediscover, if you will, Jesus’ message.”

The religious order was founded in 2001 by Brazilian Father Gilson Sobreiro. Troubled by the violence, gang activity, drug addiction and poverty that he saw in Sao Paulo, Father Sobreiro rented a house where addicted youths could live and recover.

From this, the order spread to 12 countries, including Paraguay, Argentina, Nicaragua, El Salvador, France and Canada. In 2012, the first members arrived in Kansas City, Missouri.

“We live for the poor,” Friar Benjamin told Angelus, the online news outlet of the Archdiocese of Los Angeles. “We always go to the worst areas of the cities, places where you find more violence, drugs, gangs, prostitution, you name it.”

In Los Angeles, that means Skid Row, where more than 4,000 of Los Angeles County’s nearly 53,000 homeless people live, according to the Los Angeles Homeless Services Authority. Father Brian Nunes, the archbishop’s priest secretary, said the decision to call on the religious order was a direct response to the city’s growing homelessness crisis.

“So many people are working on the issue of homelessness, but Archbishop Gomez wanted to make sure they’re cared for in a spiritual way,” he said.

Friar Benjamin agreed that spirituality is at the core of their mission.

“We give out simple food, but we develop friendships,” he said. “Once they realize that you care about them, and that what we do goes beyond food, then they understand, and something internal happens, and it’s like a strength comes and they start fighting for their lives again.”

While the religious order is not the only one ministering on the streets of Los Angeles, it is perhaps the most visible.

Sister Maria Carlos-Valdez, archdiocesan vicar for women religious, said that groups such as Lovers of the Holy Cross, Mary Queen of Heaven Missionaries, the Religious Sisters of Charity and the sisters at the Good Shepherd Shelter also minister to the city’s homeless people, but often do so in lay clothing, so they aren’t always recognized as religious.

To better serve poor people, the friars and sisters strive to live in poverty themselves. It means having minimal personal possessions — a few changes of clothes and no cellphones — sleeping on the floor and eating only what has been donated. To raise money, they make rosaries and other crafts that they sell in local parishes.

“Especially now, in our world, people think that to be happy you have to have and have and have,” said Sister Maria Goretti of the Spiritual Infancy, a member of the community.

“When people look at us, they’re reminded that we’re not made for this earth. People think, ‘Oh, you don’t have cellphones, Facebook, social media.’ But it’s also beautiful because we’re a sign for people who can’t live without the internet,” she said. “We see society and how you can’t leave your phone. Our poverty can assure people that you can live without so many things.”

Such a life of simplicity rooted in poverty drew Sister Maria to the order.

She first encountered the order during a retreat as a teenager in Brazil. She was struck by how young its members were and the joy they radiated, making her want to learn more. They didn’t have any of the material possessions she had considered the key to happiness, yet they were joyful.

“It was very powerful,” she said. “For me, what was happiness — they didn’t have any of it. But they were happier than I was with the things I had.”

So at age 15, Sister Maria, who is now 25, joined the order. She ministered in Brazil, Paraguay and Kansas City before coming to Los Angeles.

Claudia Pina, a volunteer from La Habra, California, has been making and distributing sandwiches with the order since February. One Saturday in August she brought her 8-year-old son, who not only put together bags of food, but also wheeled them on a dolly around Skid Row. The experience, she said, has been important to his faith formation.

“It allows him to see what’s taught in the Bible firsthand and to live it,” she said.

While food distribution has been the centerpiece of the order’s work, members are hoping to do more. Eventually, Friar Benjamin said, they would like to open a house so that homeless people can live with them and escape Skid Row.

Opening a house would allow the religious order to reach even more people, but Sister Maria said that numbers are not their focus.

“I always remember that the Gospel is not like everyone else, who say, ‘We want numbers, we want results,'” she said. “The Gospel of the Lord says that when one person converts, the heavens rejoice. If one person there can change, or if we can help one of them, or later, after going there many, many times, if one of them says, ‘Oh, maybe I have a way to change,’ and it’s only one — then it’s worth it to be there.”

Kandil writes for Angelus, the online news outlet of the Archdiocese of Los Angeles.