Bishop to cooperate with investigation into abuse at Vermont orphanage 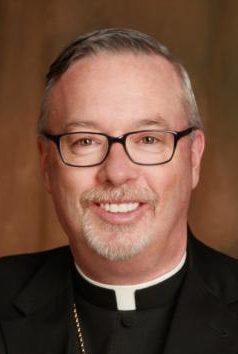 Speaking to parishioners during Mass at St. Joseph Cathedral Sept. 9 and then with reporters afterward, Bishop Coyne said the investigation was needed to uncover what happened at the now-closed St. Joseph Orphanage.

“The only way we can get to the truth of these matters is to be cooperative,” the bishop said at a news conference after a morning Mass.

Vermont state and Burlington city officials announced Sept. 10 that they would form a task force to investigate allegations of abuse and possible criminal activities, including homicides, throughout the orphanage’s history.

“We pledge to do a thorough investigation and public accounting of what occurred,” Burlington Mayor Miro Weinberger said at a news conference announcing the task force.

In brief comments at the end of the Mass, Bishop Coyne said that during his four years in Burlington, he had heard only parts of the history of the orphanage, which was operated by the Sisters of Providence until 1974.

The bishop said he learned of the details of the alleged abuse of orphaned children in an Aug. 27 report by the online media portal BuzzFeed. The report supplemented findings of a 1990s investigation by The Burlington Free Press.

The BuzzFeed report detailed alleged child beatings, the locking of children in closets and cabinets, physical abuse, and at least three deaths.

“The fact that those events happened over 50 years ago does not lessen the horror and grief we all feel at the thought of innocent and vulnerable children suffering abuse at the hands of those who should have cared for and protected them,” Bishop Coyne told the cathedral congregation, reading from a prepared text.

“Shining the light of truth upon the wrongs of the past can help us to continue our efforts to rid the church of the darkness of sin and guard against the recurrence of wrongdoing,” he said.

The bishop also welcomed the task force, saying: “I will do everything I can to help them discover the truth.”

“The police and the law enforcement agencies involved in the task force are doing their job in pursuing these matters,” he said. “I offer to these authorities our cooperation and I pledge that the Diocese of Burlington will be forthcoming with anything that can be helpful in resolving the allegations about matters.”

The investigation was to be carried out by the Burlington Police Department, the state’s attorney for Chittenden County, Vermont State Police and Attorney General T.J. Donovan.

“We know there are countless victims of abuse, physical and sexual abuse, that are still living in our state today,” Donovan said at the press briefing. “While there may be challenges given the current state of our laws, we want to hear from the victims. We want to give voice to the victims. We want to stand up for the victim of sexual abuse who have suffered at the hands of the Catholic Church not only here in our state, but across the country.”

Donovan said that he had spoken with an attorney representing the diocese and that he soon planned to meet with Bishop Coyne. He said had not yet been in contact with the Sisters of Providence.

Weinberger acknowledged that Vermont public officials earlier had “failed” the children living at the orphanage “by allowing some of these intolerable conditions to exist.”

“Then in the 1990s, when dozens of victims came forward to report, the justice system did not provide justice and closure for those victims,” he said.

The task force planned to establish a procedure for victims to explain anew what happened to them.

After the Sisters of Providence closed the orphanage in 1974, the building became the administrative offices of the Burlington Diocese. In 1993 a former resident came forward to say he had been abused. His story led more than 100 other former residents to detail allegations of abuse. Afterward, the diocese offered dozens of former residents $5,000 each for therapy costs provided they agreed not to sue.

Following the payout of more than $20 million to settle dozens of clergy sexual abuse claims, the diocese sold the building to Burlington College in 2010.

NEXT: Marquette University removes its past president’s name from building