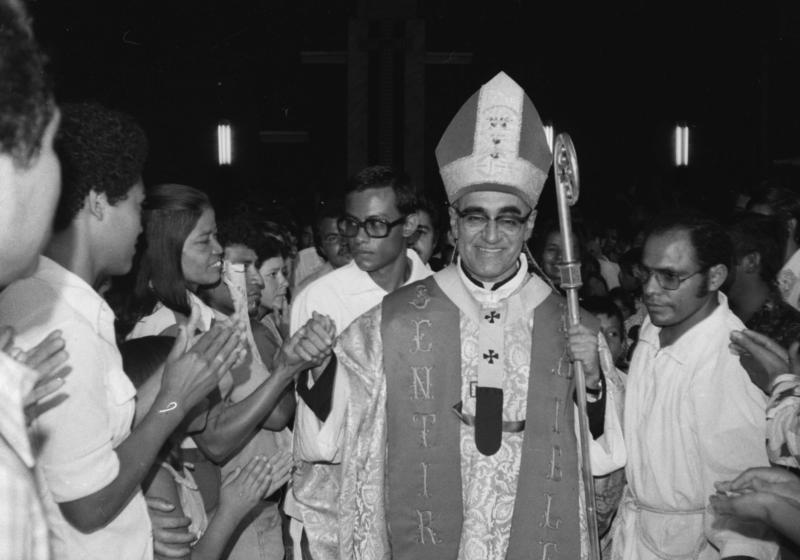 Then-Archbishop Oscar Romero is pictured in an undated photo greeting worshippers in San Salvador, El Salvador. Blessed Oscar Romero’s martyrdom, “the holy sacrifice of his life,” during his celebration of the “holy sacrifice” of the Mass holds a powerful lesson for Catholics, Bishop John O. Barres of Rockville Centre, N.Y., said in a new pastoral on the life and ministry of the soon-to-be saint. (CNS photo/Octavio Duran)

ROCKVILLE CENTRE, N.Y. (CNS) — Blessed Oscar Romero’s martyrdom, “the holy sacrifice of his life,” during his celebration of the “holy sacrifice” of the Mass holds a powerful lesson for Catholics, said Bishop John O. Barres of Rockville Centre.

“He teaches us so powerfully that our embrace of the cross of Christ in our lives connects with the rhythm of the pascal mystery sacrifice of the Mass streaming through every dimension of our lives and missionary spirit on Long Island and beyond,” he said in a new pastoral on the life and ministry of the soon-to-be saint.

It was released Sept. 23 in advance of the Oct. 14 canonization of Blessed Romero. In it, Bishop Barres outlines ways the church can prepare for “this historic moment.”

A native of El Salvador, then-Bishop Romero became archbishop of San Salvador in 1977. He emerged as a champion for the poor and an uncompromising critic of a government he said legitimized terror and assassinations. His radio show and homilies drew thousands of listeners and earned him the title “Voice of the Voiceless.”

On March 23, 1980, in response to increasing violence, Archbishop Romero gave a homily in which he told soldiers to follow the law of God and disobey orders to fire on unarmed civilians. The next day, he was fatally shot by an assassin while saying Mass in the chapel of a hospital.

He was fatally shot March 24, 1980, during Mass. The Catholic Church deemed that his violent death was carried out “in hatred of the faith,” so he was beatified May 23, 2015. Earlier this year Pope Francis announced he would be canonized this October along with Blessed Paul VI and four others during the world Synod of Bishops.

Bishop Barres suggested Catholics can prepare for his canonization by reflecting on his “heroic life and sanctity” and by reading his homilies and pastoral letters and various biographies written about him.

He called for “a more intense commitment of the Catholic academic community to study the archbishop’s spiritual theology, missiology and approach to Catholic social justice teaching and the corporal and spiritual works of mercy.”

“Taking Romero scholarship to the next level will enrich our global church immensely,” the bishop wrote.

He noted that Salvadoran priests and seminarians in the Rockville Centre Diocese have told him that Blessed Romero’s episcopal motto — “Feel With the Church” (“Sentir con la Iglesia”) — is “particularly moving and inspirational to them.” It means “to experience, to live and to walk with the people,” he noted.

Members of “our beautiful El Salvadoran community on Long Island,” he continued, talk often of “the oral tradition passed on by their families and communities about the impact of Blessed Archbishop Romero on their Catholic faith, their parishes and their country.”

The diocese, he said, seeks the advice of this community, he said, “on how to live in a more intense way the spirit of the saint on Long Island.”

Blessed Romero’s human rights legacy is so admired by people of all faiths and no faith, so this provides a natural opening for the Diocese of Rockville Centre and the wider church to engage in in ecumenical and interfaith dialogue and prayer, Bishop Barres said.

“The ecumenical and interfaith opportunities can be summarized by the fact that Archbishop Romero is one of the 10 20th-century martyrs depicted in statues above the Great West Door of Westminster Abbey in London,” he noted.

Connecting the canonization to today’s issues, he said, also can come in the call for comprehensive immigration reform in the United States, a nation “built on principles” Blessed Romero espoused: “the dignity of the human person, social justice, the sanctity of human life and the family, and a good Samaritan love for the poor.”

Bishop Barres said the Blessed Romero’s holiness needs to be presented to “the next generation of Catholics.” He asked for his intercession “for a rich and new harvest of vocations to the priesthood and religious life in our Hispanic community.”

The archbishop’s deep humility and his embracing of the sacrament of penance is as profound as his “humanity and solidarity with the poor,” the bishop said.

“Blessed Romero understood both the power of conversion in the sacrament of penance and how that conversion could help provide for the social change El Salvador desperately needed,” Bishop Barres said. “Like Blessed Romero, when we embrace the personal conversions of the sacrament of penance, we see the global challenges of migration through the lens of the kingdom of God and the prophetic mission of mercy of the Catholic Church on earth, rather than through our own limited vision.”

“We begin to better understand our own role in welcoming strangers as we follow Jesus’ call and build a genuine culture of life and civilization of love.”

Bishop Bares concluded his pastoral by noting that Blessed Romero “was no stranger to anguish and pain in church life.”

“We ask his intercession for the healing of survivors of clergy sexual abuse and a new and powerful experience of church reform grounded in holiness, mission and a commitment to dramatic missionary growth,” he said.

NEXT: In homily, Calif. priest says he was abused, hears from dozens of victims