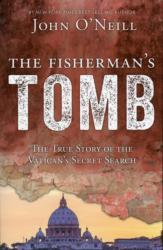 For legendary oilman George Strake and New York Times best-selling author John O’Neill, the buried treasure was based on Matthew 16:18 when Jesus said: “You are Peter and upon this rock, I will build my church.”

Strake, a devout Catholic millionaire, agreed to Pope Pius XII’s request in 1940 to help fund the search for the saint’s remains. The pope and then-papal secretary Giovanni Montini (later Pope Paul VI) had dispatched a 30-year-old American priest Father Walter Carroll, originally from Pittsburgh, to travel to Houston to ask Strake to finance the “Apostle Project,” the name for the secret excavation efforts.

Part of the need for secrecy was the time period when this took place: when Nazis were marching Allied prisoners around the Colosseum in Rome and arresting priests and Jews in Italy.

“Father Carroll was truly the unsung hero of this true tale. Not only was he the liaison between Strake and the Vatican, he also was among those hiding many of the Jews trying to escape the Nazis. He was among the first to bring medical supplies and food to the concentration camps once they were liberated,” O’Neill told the Texas Catholic Herald, newspaper of the Archdiocese of Galveston-Houston.

Because Christians are still being persecuted in the Middle East and other parts of the world, O’Neill said he is donating proceeds from his book to Catholic Relief Services to help those persecuted because of their faith.

He and fellow book researcher Sarah Wynne are beginning work on a movie screenplay based on the secret excavation that began in 1939 when a workman helping to dig a grave and chapel for deceased Pope Pius XI fell through the floor that gave way.

“We want the opening scene to be the workman falling through the floor and finding himself surrounded by statues and colorful artwork around tombs of mostly Roman pagans,” Wynne said.

The search works through multiple twists and turns and character personality clashes, finally succeeding in finding relics in 1942. Bones were pulled from a marble-lined niche wall of buried ancient graffiti inscribed with codes of “T” for the crucifixion, “R” for resurrection and the inscription “Peter is here.” 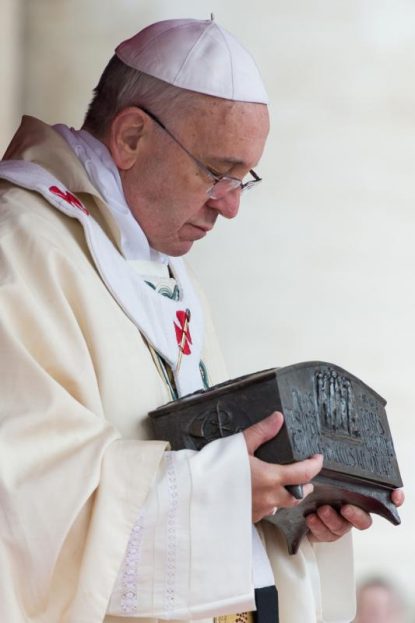 Pope Francis holds a bronze reliquary containing the relics of St. Peter the Apostle during a 2013 Mass concluding the Year of Faith in St. Peter’s Square at the Vatican. (CNS photo/L’Osservatore Romano)

The area that had been an open-air cemetery in ancient times was buried below multiple levels beneath the altar in St. Peter’s Basilica. Inexplicably, the search continued and the bones were placed in storage and not examined by a medical anthropologist until 1962.

What was found confirmed oral history, that the Apostle Peter was crucified upside down, executed by the Roman Emperor Nero in A.D. 66 at the foot of Vatican Hill, which was used as a dumping ground for corpses at that time, centuries before any church was built there. Then Emperor Constantine, who legalized Christianity, built St. Peter’s Basilica around the year 326 on Vatican Hill. Completed in 360, it lasted more than 1,000 years before being rebuilt into what is now St. Peter’s Basilica, with construction beginning in 1506 and completed in 1626.

The medical examination of the bones determined the remains to be those of a 60- to 70-year-old robust male, about the reported age of Peter when he died. The remains also were compatible with a person crucified upside down since the feet had been cut off, which Romans were known to do because the amputations were easier than removing nails.

O’Neill said he became interested in writing this book after a tour of the Vatican in 1995 and then later going on an underground visit to the excavation site and tombs where both Roman and Christian remains were found. The tour is booked many months in advance and only about 250 people daily are allowed in the underground below the Vatican.

“I confirmed with Mr. Strake’s son, George Strake Jr., that St. Peter’s bones were found with the help of his father’s generosity and support,” O’Neill said.

Pope Francis showed the bone fragments reputed to be of St. Peter for the first time publicly in 2013. Hugging the bronze box to his chest, Pope Francis opened it to reveal eight bone fragments and blessed them, wafting incense over the remains during an open-air Mass in St. Peter’s Square.

“It was a fitting end that our first pope was reintroduced to the public by our most recent pope,” O’Neill said.