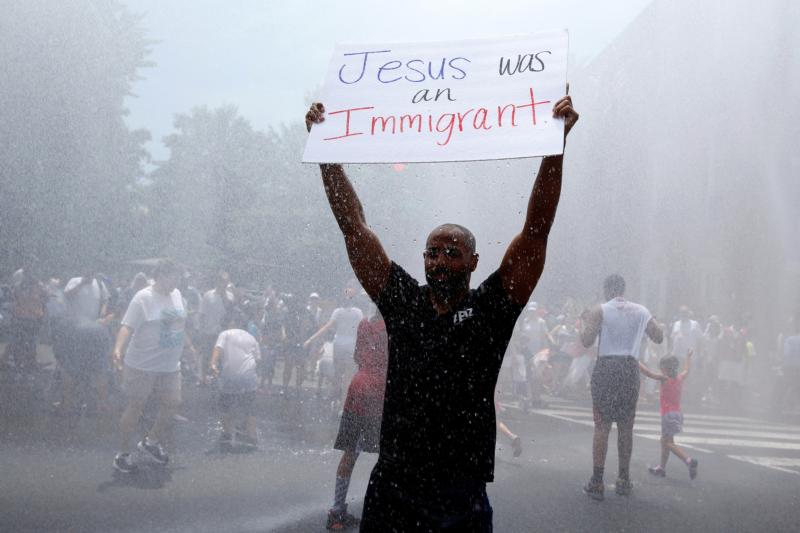 A man holds up a sign as he stands in a spray of water from a fire truck during a late June rally by immigration activists to protest against the Trump administration’s immigration policy outside the White House in Washington. Catholic leaders are speaking out against a Trump administration proposed rule announced Sept. 22 that would deny green cards to legal immigrants using public assistance. (CNS photo/Joshua Roberts, Reuters)

The 447-page proposal called, “Inadmissibility on Public Charge Grounds,” is published on the Department of Homeland Security’s website, www.dhs.gov. A news release announcing the rule says it aims to “clearly define long-standing law to ensure that those seeking to enter and remain in the United States either temporarily or permanently can support themselves financially and will not be reliant on public benefits.”

Federal law has always required those seeking green cards — permits allowing immigrants to live and work permanently in the U.S. — to prove they will not be a burden to the U.S. government, but it has never considered the use of public benefits, such as food stamps or housing vouchers, in its decision to issue the cards.

The action could force millions of immigrants who rely on public assistance for food and shelter to choose between accepting financial help in the form of Medicaid, food stamps, housing vouchers or other forms of public assistance, or seeking a green card to live and work legally in the United States.

The administration’s action “undercuts decades of administrative policies and guidelines on how immigrants are treated by the United States government,” said two U.S. bishops in a Sept. 23 statement.

In their statement, the bishops said they were just beginning to review the Trump administration’s proposed rule but “upon initial analysis” they said “it appears that this will be very harmful to families, raising fear among immigrant families already struggling to fulfill the American Dream.”

They also said the action was likely to “prevent families from accessing important medical and social services vital to public health and welfare.”

Jeanne Atkinson, executive director of the Catholic Legal Immigration Network, was more blunt in her assessment of the government’s proposed action, saying: “The administration has sunk to a new level of cruelty with this proposal to punish immigrants who use government assistance to feed, provide medical care for and house their families.”

In a Sept. 24 statement, she called the proposed rule a “cynical tactic, intended to stir anti-immigrant hostility before the November election.”

She also said it was “based on flatly inaccurate assumptions.”

“The targets of the proposal are immigrant families, who are no more likely to use publicly funded services than native-born Americans,” she said. “Yet it would force people to choose between obtaining green cards and getting needed assistance to which their families are legally allowed.”

“Making families decide between permanent immigration status or ensuring their families have enough to eat is an astonishingly cynical and heartless attack on families for political reasons,” Atkinson said.

The Department of Homeland Security will allow a 60-day comment period once the proposed rule is published in the Federal Register. After that, the administration will take the feedback it receives into consideration is issuing its final rule.

NEXT: Head of Georgetown Prep urges renewed commitment to being ‘men for others’