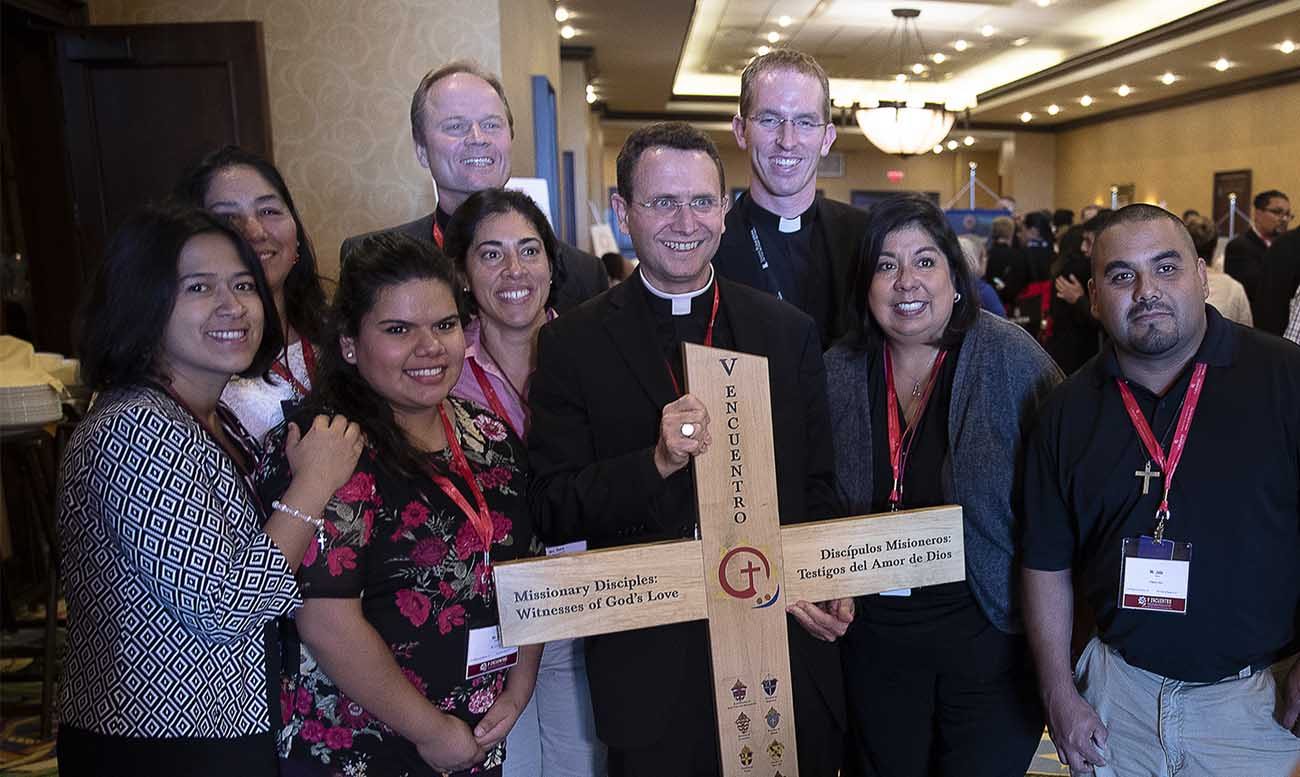 Auxiliary Bishop Andrew H. Cozzens of St. Paul and Minneapolis poses for a photo Sept. 20 with delegates prior to the start of the Fifth National Encuentro, or V Encuentro, in Grapevine, Texas. The Sept. 20-23 event is a gathering of more than 3,200 Hispanic Catholic leaders and about 125 bishops from across the country. (CNS photo/Tyler Orsburn)

GRAPEVINE, Texas (CNS) — A video message from Pope Francis and a procession of Encuentro crosses representing all of the participating episcopal regions were the highlights during the first day of the National Fifth Encuentro gathering taking place Sept. 20-23 in Grapevine.

With hearts full of excitement and joy, about 3,000 Hispanic ministry leaders cheered as they welcomed representatives for each of the 14 episcopal regions approaching the stage and carrying the same crosses and colorful banners that accompanied their gatherings during the multiyear process of discernment and consultation that began at their parishes. The crosses were placed on the stage by the bishops who served as chairs for each region.

Pope Francis captivated the audience with a video message that was received with a standing ovation.

“I see that the Fifth Encuentro is a concrete way for the church in the U.S. to respond to the challenge of going beyond what is comfortable, business as usual, and to become a leaven of communion for all those who seek a future of hope, especially young people and families that live in the peripheries of society,” the pontiff said.

He also urged them to continue the process of pastoral conversion at all levels through an encounter with one another centered in the adoration of Jesus Christ.

The gathering, also known as V Encuentro, brings under one roof about 2,700 diocesan representatives, 125 bishops from 159 dioceses and archdioceses across the country, and other members of Catholic organizations. During the four-day event, they planned to continue the discernment process to develop a national pastoral plan for Hispanic ministry.

Cardinal Daniel N. DiNardo of Galveston-Houston, president of the U.S. Conference of Catholic Bishops, welcomed the crowd and addressed the need for healing and accountability sparked by the clerical sex abuse scandal.

“As bishops, we have fallen short of what God expects of his shepherds. By this we again ask forgiveness from both the Lord and those who have been harmed, and from you, the people of God.” Cardinal DiNardo said.

He emphasized the efforts being made to support and accompany survivors in their healing and to implement stronger protections against sexual abuse.

“Amidst this darkness the Encuentro is a light that shines and illuminates the way forward. The enthusiasm, compassion, the love and the joy of the Encuentro process is a means of grace. A gift to us as we rebuild the church,” the cardinal told the Encuentro participants.

Archbishop Gustavo Garcia-Siller of San Antonio led the evening prayer and asked for prayers for the victims of clerical sexual abuse.

“Let us pray to God for the victims of the crimes that led to this crisis. Do everything you can for the healing of all the victims of these abuses and pray also for the perpetrators and for us, your shepherds,” Archbishop Garcia-Siller said.

“We are the elders and the offspring of the sacred history woven with the many threads of the past and the present and looking toward the future,” she said. “We recall the past and how God has traveled with us throughout these many decades as Catholic Hispanics, Latinos.”

Sister Pineda has participated in all the encuentros since 1972, when the first Encuentro took place in Washington. During that very first gathering, priests, bishops and lay leaders proposed significant ways to attend to the pastoral needs of Hispanic Catholics.

In 1977, the second Encuentro also was held in Washington with the theme of “Pueblo the Dios en Marcha” (“People of God Going Forward”).

“In my memory, it is like a Pentecost moment,” Sister Pineda recalled. That year about 1,200 Hispanic Catholic leaders reflected on issues such as evangelization, ministries, human rights, education and political responsibility.

Sister Pineda described it as a turning point in which they shared stories of joy, sorrow, neglect and hope. They were drawn together as a Hispanic community and became aware of the unique contributions they offered to society and the church. In turn, the church was motivated to respond more authentically to the needs of that growing community.

The third Encuentro, in 1985, focused on youth, the poor and human dignity, and led to the creation of a national pastoral plan for Hispanic ministry.

Encuentro 2000 embraced the many culturally diverse communities in the United States and the cultural and religious contributions that also enrich the church, Sister Pineda said.

Bishop Michael F. Olson of Fort Worth welcomed the participants, including international guests such as Archbishop Christophe Pierre; Guzman Carriquiry, secretary of the Pontifical Commission for Latin America; and bishop-representatives from the Latin American bishops’ council, or CELAM, as well as from Canada, El Salvador and Mexico.

Through a process of missionary work, consultation, leadership development and community building, the Encuentro seeks to develop better ways in which the Catholic Church responds to Hispanic Catholics in parishes around the country and to strengthen them as leaders and missionary disciples.

NEXT: Continue to be an evangelizing church, nuncio tells Encuentro delegates