‘God has not abandoned us,’ says survivor of clergy sex abuse 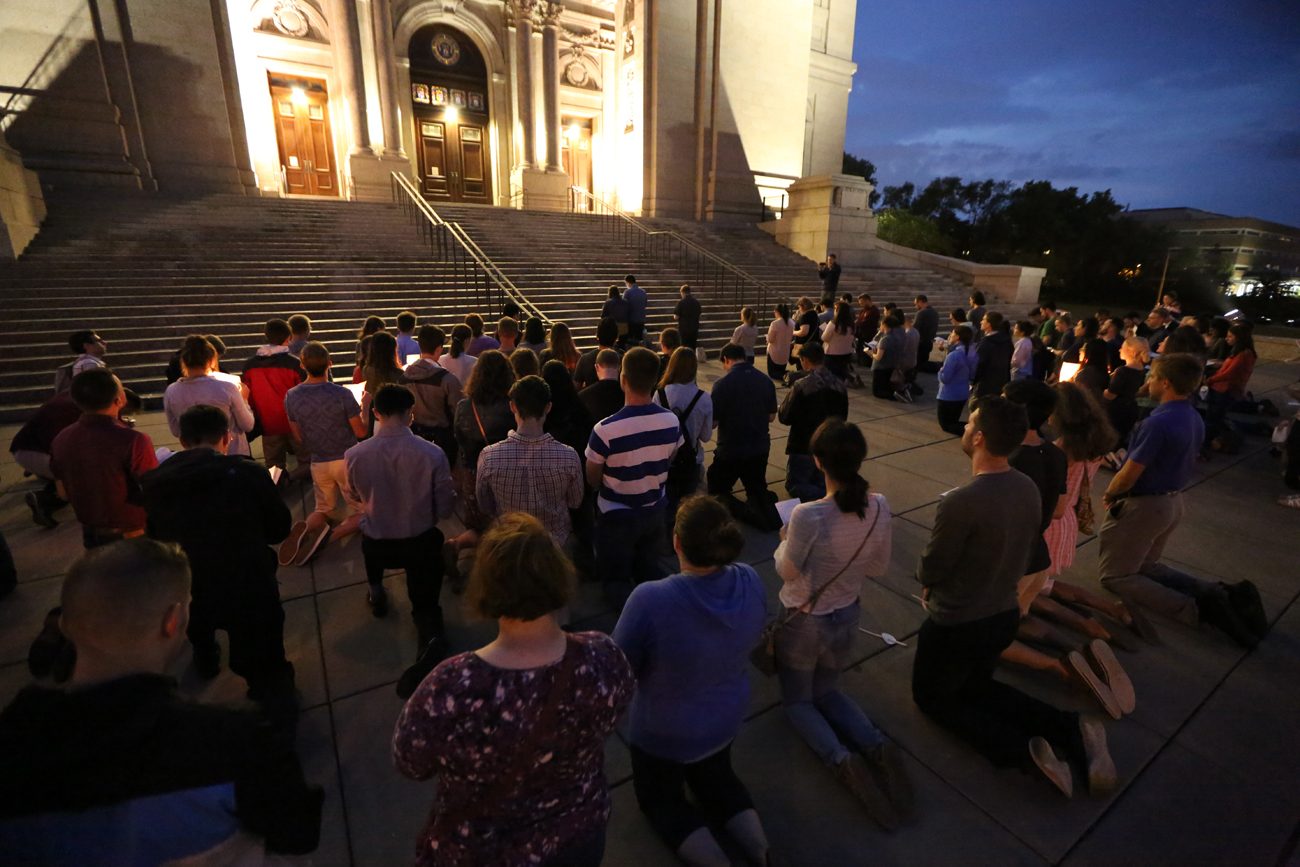 More than 100 young adults kneel in prayer in front of the Cathedral of St. Paul in St. Paul, Minn., Aug. 20 during a vigil for survivors of clerical sexual abuse and healing for the church. (CNS photo/Dave Hrbacek, The Catholic Spirit)

ST. PAUL, Minn. (CNS) — At a Holy Hour service Sept. 15 at the Cathedral of St. Paul, a survivor of clergy sexual abuse told the congregation that God has not abandoned the church now.

“My fellow Catholics: During this abuse crisis, have any of you wondered where God is, and how he is feeling? I have,” he said. “I came to the conclusion that God has not abandoned us. In fact, I believe he is crying right along beside us.”

The abuse survivor, who wished not to be named publicly, was introduced by Archbishop Bernard A. Hebda of St. Paul and Minneapolis only as “a vibrant defender of our church and of the faith.”

He spoke at the beginning of a “Holy Hour of Reparation and Prayers for Healing” held in response to the sexual abuse crisis in the church. More than 700 people, including many families with young children and dozens of priests of the Archdiocese of St. Paul and Minneapolis, attended the hour-long service. Archbishop Hebda presided over the liturgy along with Auxiliary Bishop Andrew H. Cozzens.

The liturgy included exposition of the Eucharist and the praying of the seven “penitential psalms” for healing for abuse victims and survivors and healing in the church. The service coincided with the memorial of Our Lady of Sorrows, a feast day that acknowledges Mary’s suffering during her son’s crucifixion and death.

In his homily, the archbishop asked for prayers for abuse survivors, “that through the intercession of Our Lady of Sorrows, they might receive the healing that only Christ can bring, might recognize our sorrow and deep shame as sincere, and might contribute as they are able to the transformative change that we need as a local church.”

When the survivor addressed the congregation, he thanked Archbishop Hebda for leading the church through “very difficult times” and he thanked the archbishop and Bishop Cozzens for “tirelessly navigating the damaging effects” of abuse.

He also told the priests, deacons, religious brothers and sisters and seminarians that they are on the front lines daily in helping people heal but he acknowledged they can also be misjudged for the deeds of those who have abused others.

The survivor said those who represent the church should be prepared for negative reactions, but they should also know how important it is to be “open, listening and striving to learn and understand what a victim of abuse feels like and how their lives were affected.” Be willing to let victims express their anger and fear, he told them, and understand their difficulty in trusting others and sometimes God.

He also encouraged all Catholics to show compassion and patience with clergy abuse victims, and to understand that it may take decades for them — and the church — to heal. And to victims, he said, “words cannot begin to describe the feelings and effects of abuse that we have suffered.”

While all abuse is evil, he said, “what is distinctive about clergy abuse is that it often affects one’s belief in God and our church.” He said that abuse, however, “does not have to destroy” a person’s life, and that “there is help from a God who loves us and is with us.”

When he finished his remarks, he and Archbishop Hebda embraced.

Claudith Washington, 72, said her belief in the power of prayer compelled her to attend the service.

The survivor’s question — where was God? — stuck with her. “My faith makes me know God is in everything we suffer every day,” said Washington, a parishioner of St. Richard in Richfield.

Hearing from an abuse survivor was “one of the best blessings” of the service for Cathedral parishioner Dorothy Kenney, because it made clergy sex abuse concrete.

Overall, the Holy Hour was “very prayerful, very peaceful and the people there, their hearts were really in it, and really asking Our Lady of Sorrows to heal our Church,” said Kenney, 88. “I could just feel that.” 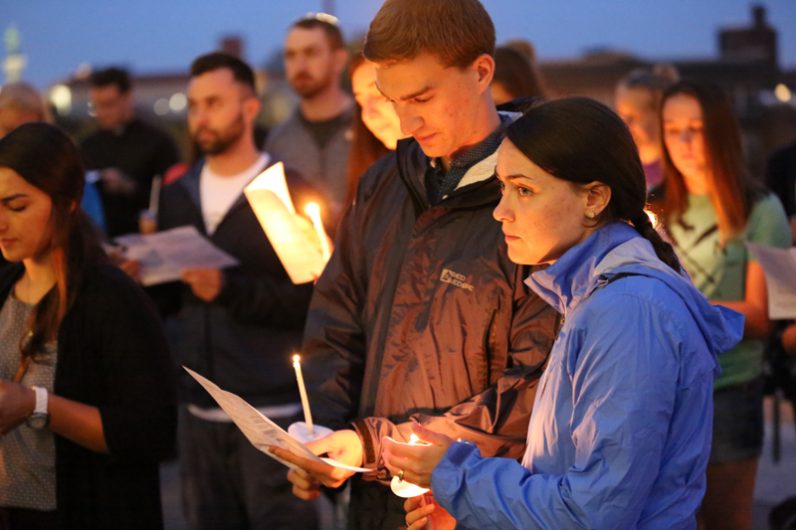 More than 100 young adults pray in front of the Cathedral of St. Pau in St. Paul, Minn., Aug. 20 during a vigil for survivors of clerical sexual abuse and healing for the church. (CNS photo/Dave Hrbacek, The Catholic Spirit)

NEXT: Catholics believe in God but ‘don’t believe in us,’ Miami archbishop says