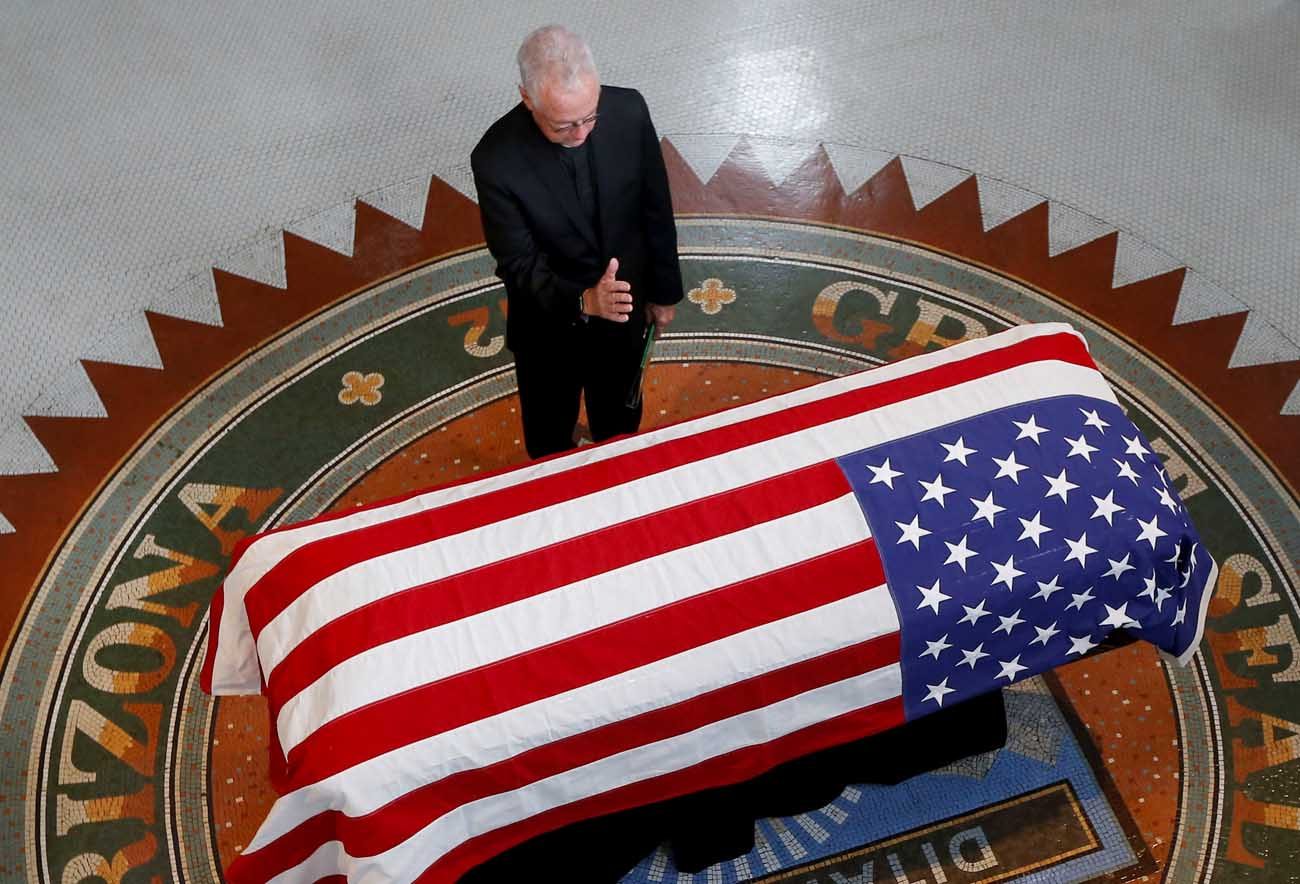 Jesuit Father Edward Reese, president of St. Ignatius College Prep in San Francisco, blesses the casket of U.S. Sen. John McCain, R-Ariz., during an Aug. 29 memorial service at the Arizona Capitol in Phoenix. Prior to the service Father Reese said: "Loving God, see our tears for our brother, our father and husband, our fellow citizen and senator," he prayed. "Let these tears bring blooming in the desert he loved, in the country he served, in all our hearts! Amen." (CNS photo/Ross D. Franklin, Pool via Reuters)

WASHINGTON (CNS) — Jesuit Father Edward Reese, the president of St. Ignatius Prep School in San Francisco, offered prayers in both Phoenix and Washington, including a homily at the National Cathedral in Washington, after the death of John McCain, the senator from Arizona who died Aug. 25 at age 81 after a long struggle with brain cancer.

Father Reese knew the McCain family when he was president at another Jesuit high school, Brophy Prep in Phoenix, for 20 years. Two of McCain’s sons attended Brophy and McCain’s wife, Cindy, served on the board of trustees.

In his Sept. 1 homily, Father Reese quoted from Gerard Manley Hopkins, himself a Jesuit priest and poet: “What I do is me: for that I came. But, I say more: the just man justices; keeps grace: that keeps all his goings graces; acts in God’s eye what in God’s eye he is — Christ — for Christ plays in ten thousand places, lovely in limbs, and lovely in eyes not his, to the Father through the features of men’s faces.”

“Don’t misunderstand me. We are not recommending John for sainthood. He was so very human and for that reason we can see God in his life,” Father Reese said.

McCain “was the just man justicing,” he added. “For John McCain, every human being deserved to be treated justly. He saw God our Father through the features of every person, especially those poor, persecuted by power and those in need.”

The 31-year senator, who served in Vietnam and was held captive by the North Vietnamese for six years, “was a man who loved and knew that love is seen in action — in doing,” Father Reese said.

At an Aug. 31 memorial service at North Phoenix Baptist Church in Phoenix, Father Reese reminded mourners that “Jesus, at his final meal with his friends, charged them to ‘remember me … in the breaking of the bread.'” Bread, the priest added, “must be broken to be shared. We celebrate the life today of a man who unselfishly was broken that we may all be put together again as one.”

Father Reese said, “We now are called to re-member, put together again in our lives and heart, John McCain our brother, Jesus’ brother.”

He quoted from another poet, Henry Scott-Holland, an Anglican priest who died in 1918. His “Death Is Nothing at All” was not intended to be a poem, but was delivered as part of a 1910 sermon: “Laugh as we always laughed, at jokes we enjoyed together. Play, smile, think of me. Pray for me. Let my name be ever the household word that it always was. Let it be spoken without effect. Without the trace of a shadow on it.”

McCain was a lifelong Episcopalian, but attended services at a Southern Baptist church for 17 years.

Prior to the memorial, Father Reese delivered an invocation for McCain at the Arizona state capital in Phoenix where McCain lay in state. “Loving God, see our tears for our brother, our father and husband, our fellow citizen and senator,” he prayed. “Let these tears bring blooming in the desert he loved, in the country he served, in all our hearts! Amen.”

Father Reese also said one of the opening prayers at the 2008 Republican National Convention that nominated McCain for president. He is the brother of another Jesuit priest, Father Thomas Reese, an author and journalist.