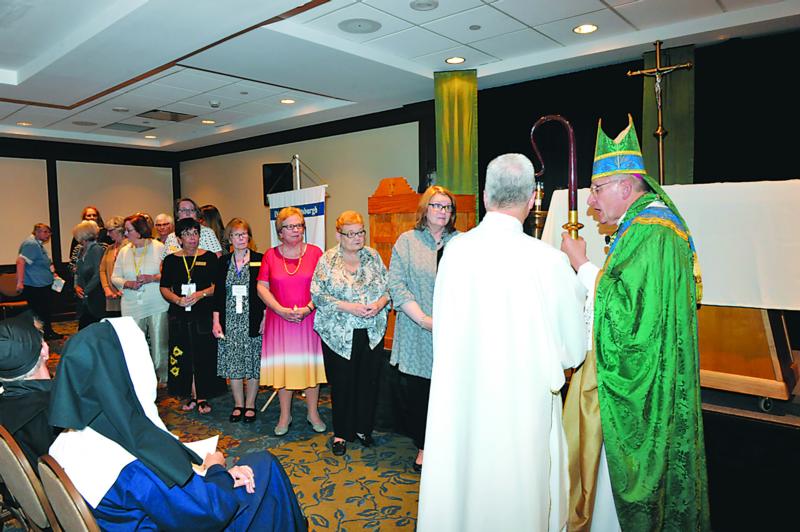 Bishop David A. Zubik of Pittsburgh recognizes officers during the closing Mass Sept. 22 for the 38th annual National Assembly of the Ladies of Charity, held in a ballroom at the Sheraton Pittsburgh Hotel.
(CNS photo/Chuck Austin, Pittsburgh Catholic)

PITTSBURGH (CNS) — Sister Elyse Staab, a Daughter of Charity, said sometimes it is not easy to recognize God’s presence in our encounters with others, but apostolic reflection allows us to refer back to an event, see what we missed and learn from it.

Vincentian apostolic reflection is a process that helps Christians see, hear and find God in their encounters with others.

“The more we practice apostolic reflection, the more we will see God,” she said. “When it’s practiced by ourselves or together, God is present. God is here now.”

Sister Elyse serves in Macon, Georgia, and is the Vincentian family coordinator for the Province of St. Louise in St. Louis. She presented a talk, “Finding God in the Experience,” at the 38th annual National Assembly of the Ladies of Charity of the United States of America Sept. 21-22 in Pittsburgh.

Sister Elyse quoted St. Vincent de Paul, who together with St. Louise de Marillac, patroness of Christian social workers, founded the Daughters of Charity. He said, “A sister will go 10 times a day to visit the poor and 10 times a day she will find God there.”

The concept originated from a Vincentian model that recognizes the presence of God in the lives of the poor, leading Christians to treat them with reverence, dignity and respect, Sister Elyse said.

Last year, the Ladies of Charity USA marked the 400th anniversary of their founding by St. Vincent in France in 1617. The 2018 theme of the assembly, “Remember the Past; Embrace the Future,” was enhanced with the words of St. Louise, “Do not believe that things will always be as they are now.”

More than 400 members from five regions across the country attended the assembly, with the largest association of 1,500 members from the Diocese of Pittsburgh. They have been in existence for 59 years in 72 parishes of the diocese.

“A woman is always doing work that has to be done and doing it with love,” she noted. She sees herself similar to other women with a family, neighbors and friends who already perform works of charity and now have a group to support one another.

“You’re seeing Jesus in the face of the poor,” Keene said. “That’s where I feel he wants me to be and to follow Vincent’s leadership and take care of Vincent’s poor.”

In her home parish of St. Matthias in Glenn Dale, Maryland, Erusaku Onukwubiri has been a Ladies of Charity member for nine years. She works in a food pantry, cooks, organizes, distributes food to the poor and homeless at a church three times a year, packs nonperishable food for the poor who come to her church once a week, and serves as treasurer of the Prince George’s County Ladies of Charity.

“It’s engaging in conversation with those you serve. It shows you respect them as persons — they have dignity,” she said.

Ladies of Charity value contributions of young women from elementary to high school. As members of the Junior Ladies of Charity, they abide by the same mission, symbols, spiritual practices and motto, “To serve rather than be served,” in humility, simplicity and charity.

Nancy Bianculli, a committee member serving on the national level, said some junior activities include working at food banks, crocheting plastic sleeping mats for the homeless and assisting with lunches for the needy.

“Young adults want a sense of community and belonging,” said speaker Kat O’Loughlin, whose topic was recruiting youth. “It’s the biggest thing we can do. We need to tell them we have a seat here for you and we need your voice.”

O’Loughlin works with 18- and 19-year-olds in her position as associate director for mission and ministry at the College of Mount St. Vincent in the Bronx borough of New York City.

Following her talk, a workshop with Leslie Slagel, clinical director of POWER, examined the needs of women recovering from addiction and focused on Pennsylvania’s outreach efforts to them. POWER, or Pennsylvania Organization for Women in Early Recovery, is based in Pittsburgh.

Despite barriers of pregnancy, parenting, genetics, trauma, physical and sexual abuses, there has been progress in the last several years, she said, and most women recover faster than men.

The homeless are more likely to be the victims of crime than the cause of it, he said. In 2017, there were six deaths on the street in Pittsburgh.

“They are there,” he said, “behind the scenes and in plain sight — in a dark alley, under bridges, near a dumpster with rodents, hiding out of sight, right under our noses, there’s hardship there.”

There are 6,000 people every year who experience homelessness, and shelters are filled to capacity, Roach said.

The Ladies of Charity is the oldest organization of women serving the poor in the church and the world. Nearly 6,000 laypeople are members. The organization is a member of the International Association of Charities, with more than 200,000 members serving in 55 countries throughout the world. Its magazine, Servicette, is published quarterly and available with membership.

The 2019 national assembly is planned for Salt Lake City.