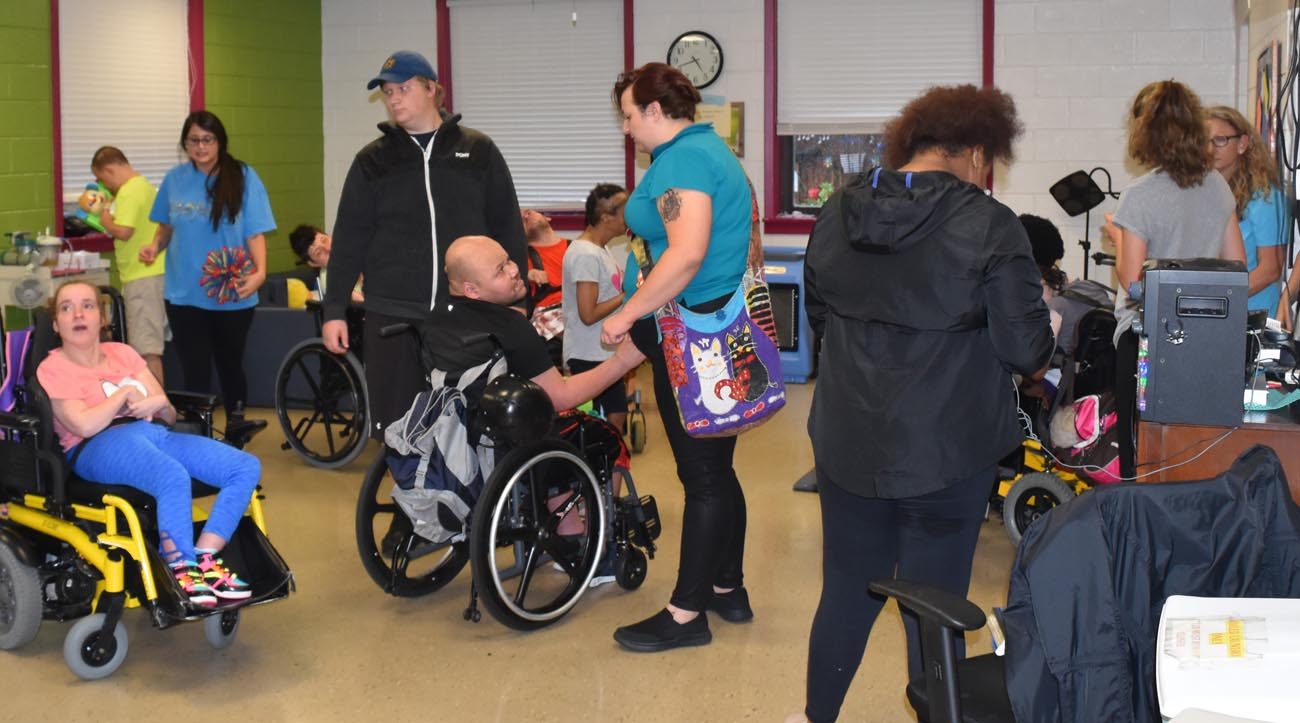 Residents of Carobell, a home for intellectually disabled people in Jacksonville, N.C., take refuge Sept. 16 at Holy Angels in Belmont after Hurricane Florence forced them from their home. Forty-six residents and staff of Carobell left the small town of Hubert Sept. 12 in a caravan of 11 vehicles, slowly making the 260-mile trek to Holy Angels, their designated emergency safe site. (CNS photo/courtesy Holy Angels)

BELMONT, N.C. (CNS) — Holy Angels, a home in Belmont for people with intellectual and developmental disabilities, lived up to its reputation of hospitality, sheltering a group of medically fragile North Carolinians fleeing from Tropical Storm Florence.

The home, run by the Sisters of Mercy, took in a group of individuals from a similar facility near Jacksonville, North Carolina, after the town was evacuated because of the Category 1 storm. Florence made landfall along the Carolinas coast the morning of Sept. 14 as a hurricane, then was downgraded as a tropical storm. It claimed at least 32 lives and caused catastrophic flooding in many parts of eastern North Carolina.

Forty-six residents and staff of Carobell left the small town of Hubert near Jacksonville Sept. 12 in a caravan of 11 vehicles, slowly making the 260-mile trek to Holy Angels, their designated emergency safe site.

Twelve of Carobell’s more medically fragile residents, along with 11 staff members, evacuated to Onslow Memorial Hospital in Jacksonville to shelter in place there. It was the first evacuation in Carobell’s 49-year history.

They were greeted with open arms when they arrived at Holy Angels, then treated to a special dinner of steak, salad and baked potatoes.

“From the time we got here, we felt the spirit of hospitality,” said Carobell’s president and CEO Vanessa Ervin. “You can’t put it into words, the gratitude that we have.”

“It has been a pleasure to welcome them,” Moody told the Catholic News Herald, newspaper of the Diocese of Charlotte. “Our residents and staff have had a great attitude. Everyone has worked together.”

Ervin and her staff left everything — their own families and homes — to accompany and care for the Carobell residents as the natural disaster unfolded around them.

“I also have gratitude for my staff,” Ervin said. “They have left everything to come to allow me to do this mission of taking care of other people’s children. I recognize that some of them have trees in their homes right now (after the storm). It’s an emotional burden.”

Six Carobell residents requiring around-the-clock care were settled in on site at Holy Angels, which has backup generators in the event of a power outage.

Ervin said that their facility did not sustain any significant damage and the food in their freezer was not spoiled during the power outage. The estimated cost of the evacuation for Carobell is $30,000, she said.

She emphasized that things can be replaced after disasters such as Florence, but lives cannot.

“The people that we have the privilege to take care of are safe,” she said. “They are safe because of a partnership with my community hospital, with the Sisters of Mercy and Holy Angels and a partnership with staff who would sacrifice everything to make sure that these loved ones are secure and their quality of life is not compromised.”

Staff at both facilities have trained for such an evacuation, Moody and Ervin both noted, and they relied on that training and preplanning to ensure that the residents were moved without risking their care.

Ervin said she hopes to be able to take the Carobell residents back home Sept. 20 if localized flooding has dissipated enough to enable the caravan to return safely.

“We feel safe here,” Ervin said, adding: “God has honored our plan all along. We have a Carobell to go back to.”

Howell is the senior reporter at the Catholic News Herald, newspaper of the Diocese of Charlotte.