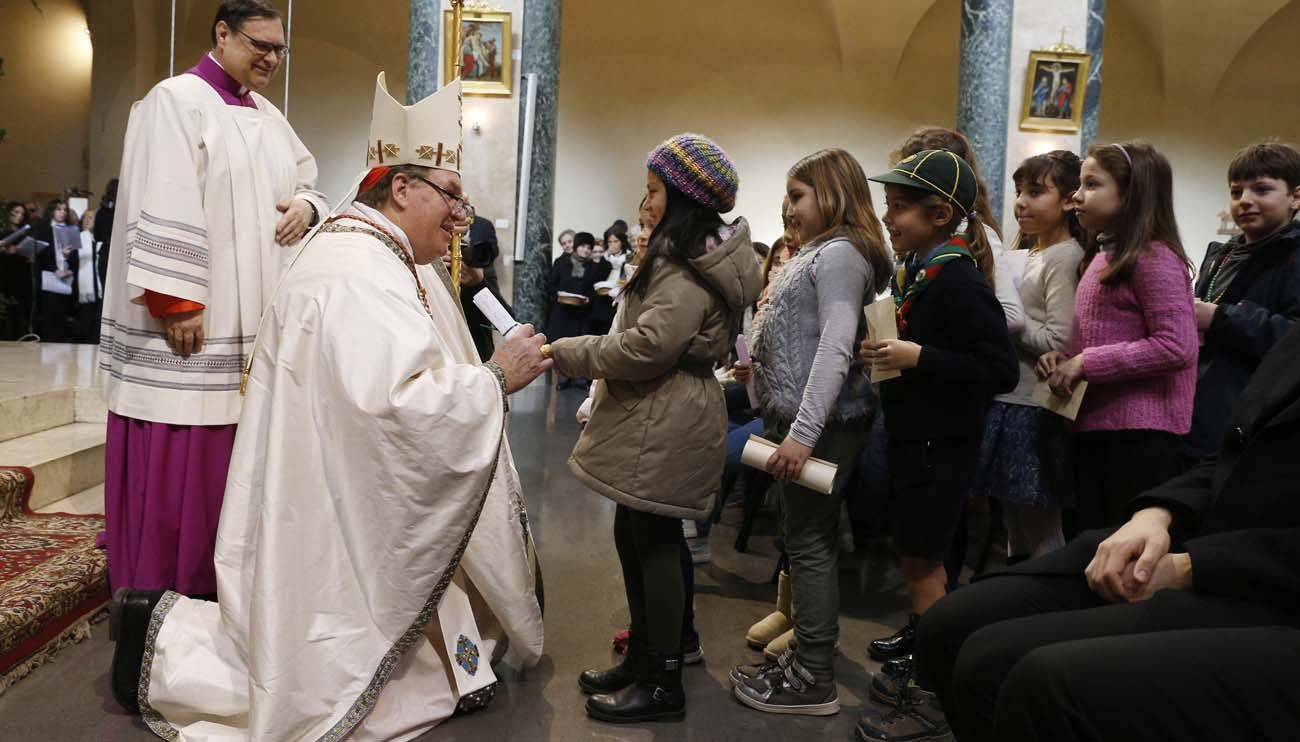 Cardinal Joseph W. Tobin of Newark, N.J., accepts offertory gifts from young people during a 2017 Mass to take possession of his titular church of St. Mary of the Graces in Rome. Cardinal Tobin advised people of his archdiocese Sept. 21 that he will not attend the Synod of Bishops in October at the Vatican. Pope Francis,he said, granted his request that he be allowed to stay with his people in Newark" at this "time of crisis" in U.S. church. (CNS photo/Paul Haring)

NEWARK, N.J. (CNS) — Cardinal Joseph W. Tobin of Newark told the people of his archdiocese Sept. 21 that Pope Francis has granted his request that he stay at home to remain with them during this “time of crisis” in the U.S. church.

The synod will meet Oct. 3-28 at the Vatican to focus on “young people, faith and vocational discernment.”

On Sept. 15, the pope had added Cardinal Tobin and other cardinals, bishops, priests to the list of members of the Synod of Bishops elected by national bishops’ conferences.

“This synod is a uniquely important moment in the life of the church, and I was honored to have been named by the Holy Father as a member of this special gathering,” Cardinal Tobin said in a letter to the people of Newark, adding that the topic for the synod “is of vital concern to the church today and in the future.”

“However, as you are aware,” he continued, “the Archdiocese of Newark suffers greatly as a result of the crisis that continues to unfold.”

“After the revelations of the past summer, I could not see myself absent for a month from our archdiocese and from you, the people entrusted to my care,” he said. “After prayer and consultation, I wrote to Pope Francis, asking that he dispense me from attending, but assuring him that I strongly support the objectives of the synod and that I would obey whatever he decided.”

The pontiff “responded the next day with a beautiful pastoral and compassionate message.,” Cardinal Tobin said. “He told me that he understands why I need to stay close to home, and he released me from the obligation to attend the synod next month.”

Editor’s Note: The full text of Cardinal Tobin’s letter can be found here.

NEXT: Work to purify church begins with ‘you and me,’ Archbishop Gomez says