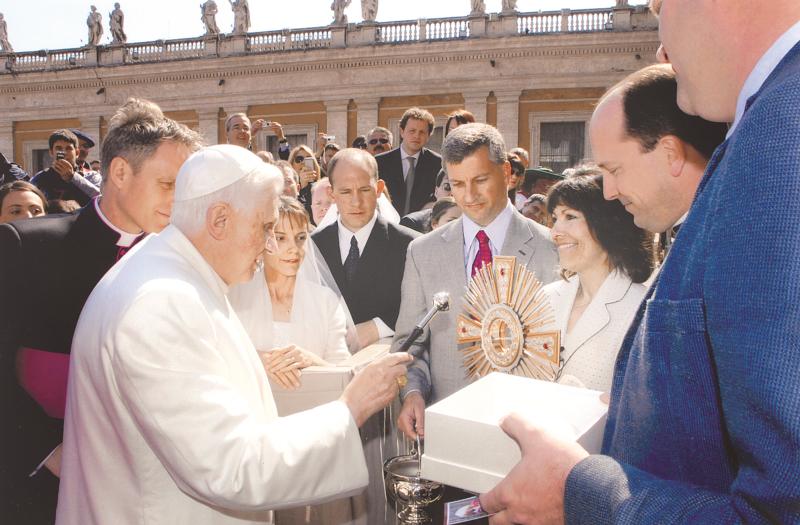 After his weekly general audience in the Vatican’s St. Peter’s Square March 15, 2006, Pope Benedict XVI blesses the Hope Monstrance, recovered from the mud left behind by Hurricane Katrina in 2005 in New Orleans and restored by a parishioner at St. Dominic Church. (CNS photo/courtesy L’Osservatore Romano)

What would three weeks of brackish and corrosive water, chemicals and mud do not only to St. Dominic Parish’s Aquinas Hall in Lakeview, which housed a small chapel across the street from the church, but also to the gold-plated, eucharistic monstrance now laid on its side and entombed in the muck at the foot of the altar?

As a precaution before the storm, parishioner Susie Veters had removed the Blessed Sacrament from the monstrance and placed it in the tabernacle. She kept the empty monstrance on the chapel altar and locked the doors.

The monstrance was no match for the 8 feet of lake water, which lifted it off the altar and dropped it to the floor, burying it in mud.

When Veters pulled the sacred vessel from the mud three weeks later, she didn’t think it had a chance to be restored, but Michael McGee, a member of the parish’s contemporary choir, had an avocation for restoring church artifacts in his spare time and worked as quickly as he could to clean the metal, restore the gold plating and stabilize the long metal rod that held everything together.

On March 15, 2006 — six months after the buried monstrance was recovered — Veters and her husband, Pat, and Msgr. Christopher Nalty, a New Orleans pastor, were in St. Peter’s Square where Pope Benedict XVI personally blessed the vessel after his general audience. He also granted a plenary indulgence to those who prayed before it and fulfilled other necessary conditions.

The artifact, ultimately named the “Hope Monstrance,” traveled in 2006 and 2007 to 140 churches across Louisiana and Mississippi to promote the city’s Katrina recovery and the power of perpetual adoration. The monstrance even made a stop at the Louisiana State Penitentiary at Angola.

Now the monstrance has gone on the road again, offering the gift of hope to communities that, like New Orleans in 2005, need a large dose of healing.

Over the next month, the monstrance will travel to three U.S. communities still reeling from disasters in 2017: Houston (Hurricane Harvey); Las Vegas (the worst mass shooting in U.S. history); and Santa Rosa, California (wildfires that destroyed 5,000 homes in Sonoma County). The monstrance also will make an appearance at the V Encuentro national Hispanic conference outside Dallas.

John Smestad Jr., a St. Dominic parishioner and director of pastoral planning and ministries for the Archdiocese of New Orleans, coordinated the stops largely with the help of Stephen Morris, a longtime friend who is in charge of youth ministry for the Diocese of Santa Rosa.

“Stephen called me at the chancery because he had stumbled across the old article about the monstrance, and he was seeing if they might be able to borrow it because their bishop wanted to do something to mark the anniversary of the fires in Sonoma County,” Smestad told the Clarion Herald, newspaper of the new Orleans Archdiocese.

“Those fires burned down vast areas. The Catholic high school burned down. Entire neighborhoods burned down. It was unreal,” he said. “It would be like driving down (a street) and the left side is gone and the right side is normal and totally undamaged.”

Morris called Smestad to ask where he might be able to track down the monstrance.

“Stephen,” Smestad replied, laughing, “that’s my parish, and I’m sure I can facilitate this.”

After getting the approval from Dominican Father John Restrepo, the St. Dominic pastor, Smestad worked with Morris to start connecting more dots beyond Santa Rosa. Houston had sustained record flooding from Harvey, and officials there jumped at the chance to have five parishes and one chapel host the monstrance for prayer services last week.

“It’s just a great sign of hope and trust,” said Lazaro Contreras, director of Hispanic ministry in the Archdiocese of Galveston-Houston. “We still hope and trust in the Lord after all these catastrophic events that we have experienced.”

In the Diocese of Las Vegas, director of faith formation Connie Clough said she knew 25 people who attended the concert last Oct. 1 in which 58 people were killed and 851 injured by a lone gunman who sprayed bullets from the top of a hotel on the Vegas Strip.

St. Viator Parish, about 10 miles from the shooting location, will host an outdoor eucharistic procession, beginning at 8 p.m. on Oct. 1 and ending at 10:05 p.m. — the time the first shots were fired a year ago.

“We will process into the church with the Blessed Sacrament and have a liturgy of the word, a short homily and silence,” Clough said.

At a recent diocesan conference, Clough said, 1,100 people attended and focused on the idea of “hope.”

“It centered on remembering not only the victims but also the heroes — the first responders,” she said. “People understand that hope doesn’t necessarily mean everything will be OK. Something has changed. But, it’s about knowing that there is something better. I will always remember the long lines of people who were donating blood.”

When the Hope Monstrance completes its tour in Santa Rosa Oct. 7, Morris said, there will be an anniversary prayer service bringing together the largest number of Catholic and Protestant faith leaders in memory. Twenty Protestant pastors lost their homes in the fires. Eighty percent of Cardinal Newman High School was destroyed.

Morris said 60 percent of the residents who lost their homes “haven’t taken the first step in rebuilding,” largely because their insurance coverage had not keep pace with their homes’ escalating values.

Morris was studying for his master’s degree in organizational leadership at the University of San Francisco in 2005 when his professor, who had taught in New Orleans years earlier, predicted to his students that if Katrina breeched the levees, New Orleans’ very existence would be imperiled.

Morris saw a city on its knees that somehow, after a decade of recovery, rose again.

“We’re trying to share the story of hope with the faithful in the Santa Rosa area,” Morris said. “It’s not just the physical monstrance. It’s the idea of sharing our suffering, our death and our resurrection.”