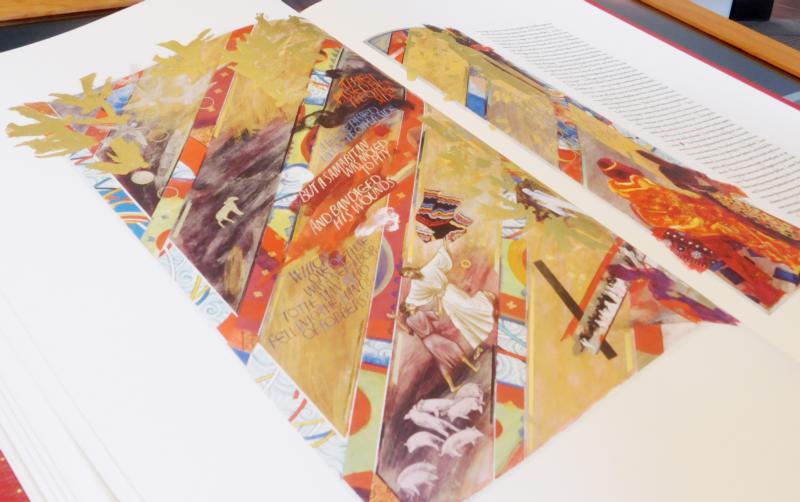 An illustration from The Saint John’s Bible is is seen Aug. 11 at Sienna College in Loudonville, N.Y. (CNS photo/Emily Benson, The Evangelist)

ALBANY, N.Y. (CNS) — On Catechetical Sunday, Catholics are called to reflect on how they hand on the faith to others and bear witness to the Gospel.

Siena College in Loudonville is working to ignite the faith of students, faculty and others in the Albany Diocese with an exhibit of The Saint John’s Bible.

The work is the first handwritten and illustrated Bible of its scale created since the invention of the printing press in the 15th century.

A few months ago, the Catholic college became one of the proud owners of a full-color reproduction of this Bible. It is on display in the school’s library in an exhibit titled, “Illuminating the Imagination: Art and Word at Siena College” and several campus events were planned around it, including a Sept. 27 blessing of the Bible by Albany Bishop Edward B. Scharfenberger.

“The sacred word nurtures and feeds our faith as Catholics,” said Siena’s mission director, Franciscan Father Mark Reamer, who helped facilitate bringing The Saint John’s Bible to the college. Reading it, he said, is “another way to enhance and nurture one’s faith.”

In 2015, Father Reamer was attending an annual meeting of the Association of Catholic Colleges and Universities when he got the idea to bring the Bible to Siena.

“There’s something simply beautiful about it,” he told The Evangelist, newspaper of the Albany Diocese.

Father Reamer believed that being able to offer students and faculty the opportunity to read from the handwritten work would “enhance the Catholic identity of Siena.”

Over the next almost four years, Siena worked to organize a payment plan that would make obtaining the Bible feasible. Siena was able to finalize payment this year. The John, Marie and Joseph Whalen Foundation gave the diocese a grant, which along with gifts from numerous other donors made the purchase possible. The total cost was around $250,000.

The Saint John’s Bible organizes the 73 books of the sacred Scriptures into seven volumes: the Pentateuch, historical books, psalms, wisdom books, prophets, Gospels and Acts, and letters and Revelation.

Each volume contains colorful, intricate illustrations that correspond with the surrounding text. Some illustrations take up entire pages, while other pages include brightly-colored calligraphy to emphasize certain quotes.

A number of the images incorporate modern elements: One page shows strands of DNA and viruses; on another, the twin towers of New York City’s World Trade Center as they stood before 9/11 can be seen in the background.

This Bible is “like a time machine,” said Peter Zaas, a professor of religious studies at Siena. “It connects modern and medieval in an interesting way.”

Zaas is having his students study it this year. They will examine the different artists’ interpretations of the text and dissect various biblical texts.

The artistic director and inspiration behind The Saint John’s Bible is Donald Jackson, a British calligrapher and senior scribe to the Queen of England. In 1995, Jackson approached Benedictine Father Eric Hollas, who is deputy to the president for advancement at St. John’s University in Collegeville, Minnesota, about his dream of handwriting a Bible.

Two years later, the university and the Benedictine monastery of St. John’s Abbey in Minnesota jointly commissioned the project.

Jackson was joined by six calligraphers and six artists. Together, by hand, the group wrote all 1,150 pages and created more than 160 major illustrations. Jackson drew the first words — “In the beginning” — on Ash Wednesday in 2000; a Jewish scribe drew the Hebrew script.

The project was completed in 2011, with only 299 replicas of The Saint John’s Bible created. Called heritage editions, no two are identical; many illustrations hand-treated. Other owners of versions of the Bible include the Vatican, Yale University and the Mayo Clinic.

Each of the seven volumes is kept locked in a glass case in Siena’s library but, with permission, students are encouraged to touch and read the volumes.

Patrick Moran, a senior at Siena, said he was able to look through a couple of pages already, but he hopes to come back and read through the Bible more thoroughly.

A tour guide at Siena for prospective students, he plans to incorporate The Saint John’s Bible exhibit in his tours so that students and parents can see it.

In viewing it, students “will see a certain side of Catholic, Christian and Franciscan tradition that they haven’t seen. This is another area that will enhance people’s faith if they let it,” said Moran, who also wants to publicize the exhibit on his class’ social media pages.

NEXT: Victim assistance coordinators comfort in a behind-the-scenes ministry