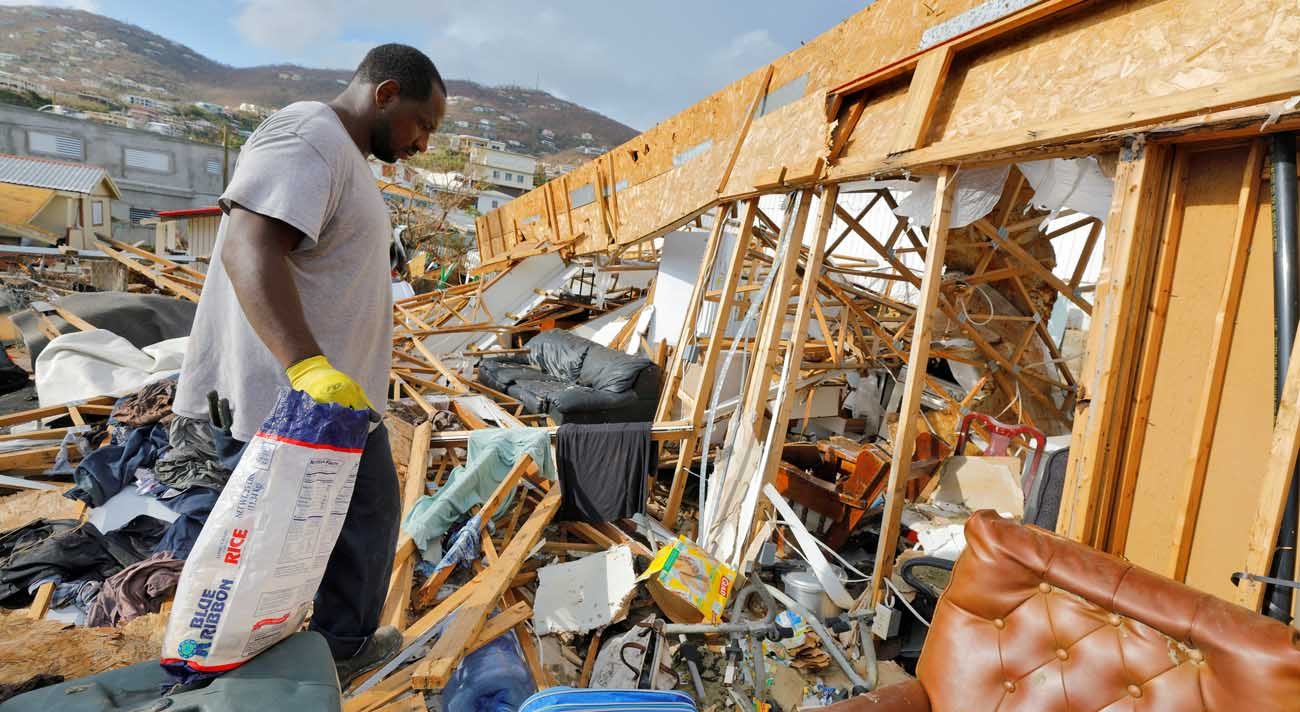 A man looks through the debris of his destroyed home in the aftermath of Hurricane Irma in 2017 in St. Thomas, Virgin Islands. A combination of heavy bureaucracy, sometimes sluggish supply chains and a shortage of contractors have slowed recovery efforts. (CNS photo/Jonathan Drake, Reuters)

PORT-OF-SPAIN, Trinidad (CNS) — One year after Hurricanes Irma and Maria smashed through the Virgin Islands, people remain jittery about the rest of the 2018 hurricane season.

“Everyone is extremely nervous and anxious about going through another hurricane without recovering from the previous two,” said Warren Bush, chief financial officer for the Diocese of St Thomas.

A combination of heavy bureaucracy, sometimes sluggish supply chains and a shortage of contractors have slowed recovery efforts, leaving repairs to many damaged homes and public buildings still incomplete.

Now, at the height of the current hurricane season, “We have to stabilize buildings to prevent additional water damage,” Bush said. “We’re very concerned about what could be.”

On Sept. 6, 2017, Hurricane Irma mowed through the islands and, two weeks later, Hurricane Maria devastated whatever was left. Both hit as Category 5 storms.

“We’ve never experienced this level of destruction,” said Bush. “And on the three islands, all at once. There’s been a shortage of contractors, materials, so that the damage hasn’t been addressed as quickly. You could have all the resources in the world, but if you don’t have contractors …”

“Every contractor has between six to 10 jobs working on,” said Andrea Shillingford, executive director of Catholic Charities of the Virgin Islands. “We are not in normal times.”

Both Bush and Bishop Herbert Bevard of St. Thomas credited the Federal Emergency Management Agency, Catholic Charities and insurance companies with getting restoration of diocesan and other properties underway.

“Schools are still severely damaged in St. Thomas and St. Croix,” said Bush, adding that students and teachers are using the safer structures.

Recovery in the islands tends to be slow, he admitted, citing mitigating factors that do not exist on the U.S. mainland when communities there are affected by storms.

“It is difficult for someone from the States (to understand),” he said. On the mainland: “We have more resources, more ability to obtain help from a greater region. It’s easier for FEMA to get in, easier for us to get aid, to get through any situations.”

Bush, who has lived in the islands for almost 20 years, added: “It’s not necessarily a lack of concern, rather, it’s one of access. It’s 1,500 miles away from the nearest point of contact” from the U.S. mainland. “And, there are often storage and distribution issues that may go unnoticed, that don’t exist in the States.”

“It would be physically impossible to evacuate people from these islands in one day,” said Shillingford, originally from the island nation of Dominica. Flights are limited, she added.

To access the Virgin Islands in a time of disaster, mainland-based FEMA would “have to wait until the airports and ports are repaired,” said Shillingford, “and a place (cleared) for the helicopters to land.”

Bush said the government of the Virgin Islands has expended “a lot of effort in the recovery process,” noting that “about 90 percent of the utilities have been reconnected.”

Bishop Bevard said repairs to several government buildings, such as the post offices and hospitals, appear to be “a problem,” and “many houses still have blue tarpaulins on their roofs, but there used to be many more.”

He said the all-important tourism industry has been heavily affected.

“Tourism is the first and only industry here,” he explained. “Where there were six cruise ships a day, now we’re lucky to have six in a week. That impacts the stores, the taxi drivers.”

Shillingford recalls one taxi driver who “was taking care of her grandchildren. Her only form of income has been driving that taxi. We had to help her restore her business” and give additional help while things were slow.

“There are lots of stories like hers,” said Shillingford, who has lived in the Virgin Islands for 11 years. “Parents can’t afford to buy school uniforms for their children.”

Homelessness is also an issue, especially among “people whose houses were destroyed.”

“People are unemployed,” she said. “It’s left to agencies like us to find funding.”

Catholic Charities operates five soup kitchens on all three islands; two each on St. Croix and St. Thomas, one on St. John. The agency serves 300-400 meals every day, up from 6,000 meals a year, the average before Irma and Maria. A mobile service delivers meals to people who cannot travel, like the many elderly people were abandoned after last year’s hurricanes.

“After the storms, they had mercy ships,” said Shillingford. “A lot of young people moved to the mainland and left their elderly people here, and they have additional needs. (Our) case managers go out to them.”

Shillingford said people remain shaky when it comes to the weather.

“Any time there’s a little rain,” said Shillingford, “people get agitated — adults, really. Children recover quickly; they look to the adults. If the adults pretend, the children feel it’s OK. Especially now, this week, people are kind of nervous,” she said as the winds of Tropical Storm Isaac fanned the islands.

PREVIOUS: Stanford University to remove saint’s name from some properties