Volunteer help with cleanup after Florence called an act of ‘faith, love’ 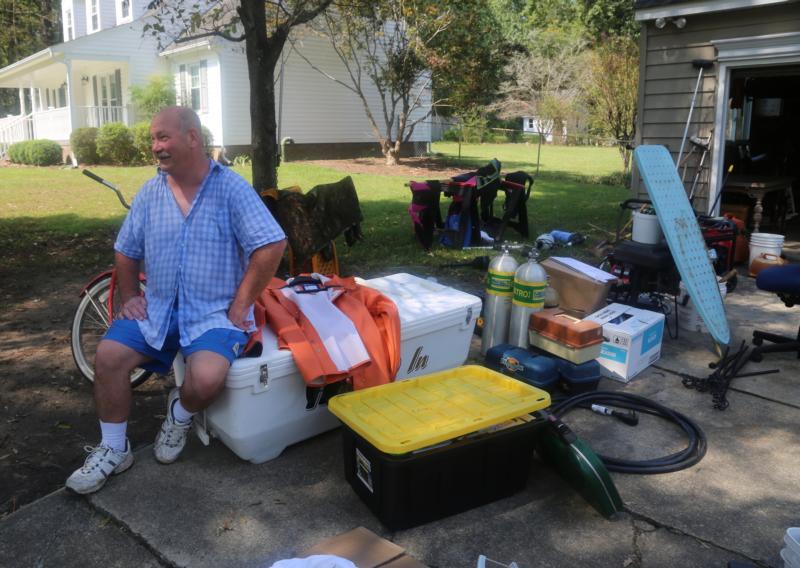 Gary Johnson sits outside his home in Trent Woods, N.C., Sept. 22. The house was flooded during Hurricane Florence, and Johnson, his wife, Megan, and their two daughters are unable to live in it. (CNS photo/Anjanette Wiley, NC Catholics)

NEW BERN, N.C. (CNS) — Nancy Sciara’s “insides were shaking.” She woke up, she said, unsure of what to expect from the day.

Sciara, 84, was widowed 12 days earlier. And, four days after that, she sat in her home and watched as wind and rain from Hurricane Florence raged outside a window. It flooded the garage and workroom of her River Bend home and damaged her living room.

Her son, from his home in New Jersey, made calls to try to hire someone to clean.

“Nobody came,” she said. “Even for money. We couldn’t even get people to hire.”

But, on Sept. 22, four Knights of Columbus arrived at her home armed with wheelbarrows, work gloves and time to serve. The volunteers from St. Paul Parish in New Bern lined the street with once-treasured possessions, such as the vise from Sciara’s husband’s workbench, that had become trash.

It was a common scene on Plantation Drive, a residential street in the previously serene golf community, where curbs were lined with wet insulation, trash bags, furniture and mattresses. Chainsaws buzzed in neighbors’ yards as fallen trees were dealt with. Large, makeshift signs created with spray paint thanked volunteers and warned would-be looters.

Inside her garage, Sciara avoided the sun and helped the Knights. She’d occasionally pick up a wet cardboard box or a stray golf ball. She paused to look at photos of her husband, and their friends.

“That’s what has to happen,” she said as volunteers carried damaged items to the curb. “You have to close your eyes and just let them do the work. You could agonize over each and every piece, but then you’d be here for a week or two.”

Because her car was flooded, Sciara has been without transportation since the storm hit. She said she was eating the food already in her home, and was thankful for the work of the Knights of Columbus Council No. 3303 and her parish community at St. Paul, where she became a parishioner in 1995.

About four miles from Sciara’s home, Gary Johnson dealt with the damage to his house in Trent Woods, which he shares with wife Megan and their two daughters. The first floor of their two-story home and two of their cars were completely flooded.

Also a St. Paul parishioner, Johnson received help from a group of seven college students from East Carolina University’s Newman Center, a Catholic campus ministry. Students cut wet carpet into squares, tore it from the floorboards and delivered it to the curb as scented candles burned in the kitchen to mask the smell of standing water.

“This is faith. This is love,” Johnson said about the volunteers. “No matter how evil Hurricane Florence could be, the force of God is even stronger. If you don’t believe it, walk out in my yard and look at that mountain of debris that these people unselfishly (created).”

Before the storm, the Johnson family evacuated to Atlanta, where they stayed with family members. When they returned home five days after the storm hit, they could not go back to live in their house, which was uninhabitable.

For the time being, they were living with a local couple who opened two rooms in their house to the family.

“We’re figuring it out,” Megan Johnson said about their situation. “There’s not any temporary housing. There’s not a hotel room anywhere. It felt helpless being away (in Atlanta.) Coming through the house and working — as grimy as it is — at least I feel like I am moving to the next step. I know tomorrow is going to be hard, but we are doing it together and we are going to get through it.”

Johnson said that she and her husband are homeowners and were required to have flood insurance because their home was in a flood plain. However, she added, they didn’t have coverage for the contents in the house.

“Everything that’s on that curb, we don’t have a backup plan for,” she told NC Catholics, magazine of the Diocese of Raleigh.

Operated by a generator, the washers and dryers were free to those who sought them, and staffed by Catholic Charities staff from regional offices and volunteers.

“It’s been two weeks since the storm came through and many families don’t have the ability to wash their clothes. Either their washing machines were damaged, or they no longer had the financial resources to clean their clothes,” said Daniel Altenau, director of disaster services for Catholic Charities of the Diocese of Raleigh.

The availability of the trailer, he said, makes the washing process easier for families impacted. And a Catholic Charities case manager is on hand to assist those in need of additional services.

Kimberly White, a day care teacher, was evacuated from her home and has been living at a shelter near Craven Terrace. For White, who lives with her 24-year-old daughter and two grandchildren, laundry is an ever-present family task.

White was looking for change so a neighbor could drive her to a laundromat when she spotted the trailer within walking distance.

“A tenant told me it was a mobile laundry unit,” she wrote in a text. “I told him he was a God-sen(d) because I only found five cents to dry all these clothes. We sang … we talked about how it’s important to reach out to others.”