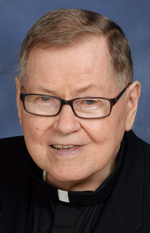 One of the 10 children of the late Thomas Cavanaugh and the late Bridget (McGlone) Cavanaugh, he attended St. Rose of Lima School, Philadelphia, and St. Thomas More High School before entering St. Charles Borromeo Seminary.

He was ordained May 21, 1966 by Archbishop John Krol at the Cathedral of SS. Peter and Paul and his first assignment was as parochial vicar at Our Lady Help of Christians Parish. He also served at St. Cornelius, Chadds Ford; Sacred Heart, Havertown and Notre Dame de Lourdes, Swarthmore.

He then served on the faculty of Cardinal O’Hara High School for 10 years, followed by parochial administrator and pastor of St. Madeline, Ridley Park.

He was appointed pastor of St. Joseph Parish in 1997 and named pastor emeritus in 2006, and then served as senior priest at Nativity B.V.M. Parish in Media.

Msgr. Richard Bolger, a seminary classmate, remembers Father Cavanaugh as especially devoted to the Blessed Virgin Mary, perhaps a practice instilled in him by his family; his father was the long-time sexton at St. Rose of Lima.

“He was a faithful priest who believed what he preached, but he knew how to laugh and he had a great singing voice,” Msgr. Bolger said. “His favorite song was “Danny Boy.”

Toward the end of his life he suffered a series of illnesses but bore them well.

“As he was dying about 10 priests were at his bedside singing the “Salve Regina,” Msgr. Bolger said. “That was very appropriate.”

Father Cavanaugh is survived by his sisters, Sister Ellen Cavanaugh, R.S.M., and Patricia Hickey Breen, plus many nieces and nephews.