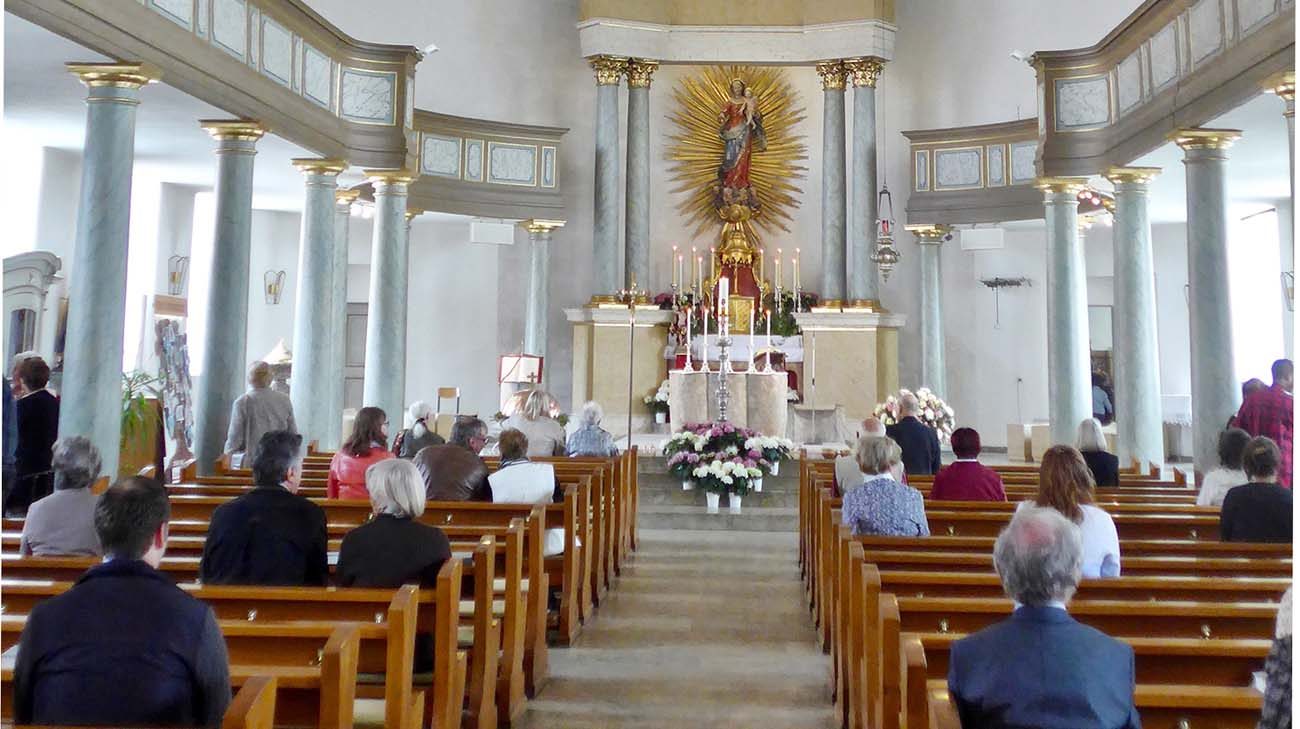 People pray at the Church of Our Lady in Bayreuth, Germany, May 13. Prelates in Germany and Austria have united to support Pope Francis in response to a former papal nuncio's demand for his resignation. (CNS photo/Zita Ballinger Fletcher)

Church leaders in Austria, Switzerland and Germany defended the pope and the church, which they say is being undermined. Similar statements were also recently issued by the Nordic bishops’ conference, which represents bishops in Sweden, Norway, Denmark, Finland and Iceland.

Cardinal Christoph Schonborn of Vienna published a column Sept. 7 in the weekly newspaper Heute. He called Pope Francis a “fighter against injustice and exploitation” who “stands against sexual abuse in the church with great determination.”

Criticism of Pope Francis “comes from circles in the church who want to get rid of this pope as soon as possible,” said Cardinal Schonborn. He said the pope’s opponents are exploiting the opportunity to criticize him during a time when he is experiencing difficult days.

“I thank God for such a compelling shepherd,” the Austrian cardinal concluded. “Thank you, Papa Francesco!”

On Sept. 8, church leaders in Zurich formally denounced Archbishop Carlo Maria Vigano’s demand for Pope Francis to resign for allegedly ignoring sanctions Pope Benedict XVI had placed on then-Cardinal Theodore E. McCarrick for sexual misconduct. They called for all Catholics in the city to pray for the pope during Masses Sept. 9.

“The demand for Pope Francis to resign appalls us and strikes us with sorrow,” read a statement released by the Catholic Church of the canton of Zurich. “We find it intolerable and unheard-of that the matter of abuses within the church should be misused to endanger the unity of the church, in pursuit of individual agendas.”

Bishop Felix Gmur of Basel, president of the Swiss bishops’ conference, weighed in on the issue Sept. 5, according to Katholisches Medienzentrum, Switzerland’s Catholic Media Center.

“We do not support a demand for the resignation of the pope,” said Bishop Gmur.

In Germany, four bishops previously at odds in the debate over Communion for civilly divorced and remarried Catholics were unanimous in their call for Catholics to remain loyal to the pope.

“It is time to stand behind the pope and support his efforts for clarification, restoration and prevention,” Bishop Peter Kohlgraf of Mainz wrote on his Facebook page Sept. 3.

“It cannot be that Catholics are only loyal to the pope as long as he represents their opinions. Without loyalty to the pope, it is not possible to be Catholic,” Bishop Kohlgraf said.

Bishop Stefan Oster of Passau expressed support for Pope Francis in a blog post “Why I believe Pope Francis,” on his personal website.

Bishop Oster admitted to personally questioning the pope’s teachings because of traditional Catholics wondering “whether the magisterium, faith, liturgy and the call to conversion are not getting too raw a deal.”

“I must admit that I am familiar with such questions since I have asked them myself,” he wrote.

He said he analyzed debates between liberal and traditional Catholics to determine whose side the pope might be on. However, based on the pope’s writings, he said, the pope is neither a liberal nor a conservative.

Bishop Oster made a detailed study of Pope Francis’s teachings, reviewing the texts of “Evangelii Gaudium” (“The Joy of the Gospel”), “Amoris Laetitia” (“The Joy of Love”), “Laudato Si’, on Care for Our Common Home,” and “Gaudete et Exsultate” (“Rejoice and Be Glad”).

He identified four key teachings of the pope: personal love for Jesus, love in the family, love for the environment, and the universal call to holiness.

“Looking more closely and less anxiously, one can see that the Holy Father does not decide for one way or another way. He searches much more for the path of depth, honesty, genuine love and credibility,” Bishop Oster said. “Ecclesia semper reformanda.” (“The church must always be reformed.”)

Bishop Oster said he sees Pope Francis as someone who “wants to consistently lead the church on a path of renewal that is neither liberal nor conservative, but one of a spirit of holiness, a spirit of the Lord in the present, which becomes a witness for the world and a place where every person — and the world — can experience God’s transformative love and become more healed in his heart.”

“I follow him on the path to renewal of the church, which he has consistently followed since the beginning of his papacy,” Bishop Furst said.

Bishop Wolfgang Ipolt of Gorlitz also expressed confidence in the pope’s leadership in early September, saying it is easy for others to cast blame while not having to take responsibility, according to KNA, Germany’s Catholic news agency.

At the conclusion of their autumn meeting in Szczecin, Poland, the Nordic bishops sent a letter to Pope Francis assuring him of their prayer and loyalty, describing the current climate as one in which “the church is being nearly ripped apart by conflicts and most recently also by attacks on itself.”

The Nordic bishops condemned sexual misconduct by clergy and also denounced “any attempt” to divide the church from within.

“Sexual abuse, abuse of power and internal strife in the highest levels obscure the face of the church,” the bishops wrote.

The bishops have called for a special day of fasting in each of their nations Oct. 5, as well as a day of prayer for the pope and the church Oct. 7, the feast of Our Lady of the Rosary.