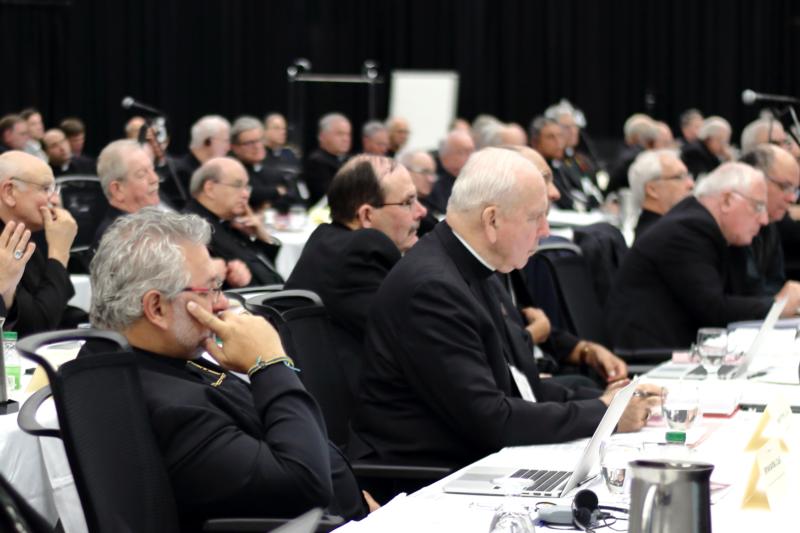 Bishops attend the annual plenary assembly of the Canadian Conference of Catholic Bishops in 2016 in Cornwall, Ontario. The bishops have issued stricter rules for media who want to cover the assembly, which this year will be in Cornwall Sept. 24-28. (CNS photo/Francois Gloutnay, Presence)

MONTREAL (CNS) — The Canadian Conference of Catholic Bishops has issued stricter rules for media who want to cover its annual plenary assembly to be held in Cornwall, Ontario, Sept. 24-28.

The CCCB now asks journalists to submit in advance the questions they intend to ask bishops and to commit to “not to approach bishops or CCCB staff for interviews at any time, including coffee breaks and meals,” according the accreditation form sent to the media Sept. 11.

In the past, the CCCB’s accreditation form asked which subjects journalists wanted to discuss with bishops. The instruction to approach people during meals and breaks did not apply to conference staff members.

The deliberations of the bishops are held behind closed doors. However, journalists can attend the first day and a half of the meeting. To participate, editors must complete the two-page accreditation form, which lists contact information for the journalist they send to cover the meeting. This form also specifies that all accredited journalists are required to comply with these rules.

But Lisa Gall, communications coordinator for the CCCB, told Catholic News Service Sept. 18 the conference “periodically examines and updates its media regulations with the understanding by our media partners that the plenary assembly is not a public meeting.”

She said instructions not to approach staff “were added on the basis of recent experience and in view of our conference’s longstanding principle that its principal spokesperson is the president or bishops whom he and the executive committee may delegate to speak officially on behalf of the CCCB. It is also an important clarification that CCCB staff attending the plenary assembly are present to support the successful conduct of the meeting of the bishops and therefore are not in a position to respond to the media.”

“The CCCB appreciates the importance that media plays in the life of the church and society in general,” she said. “In this light, and to enhance the positive relationship, we find that a clear understanding of mutual expectations is beneficial to all parties involved.”

Ninety bishops are expected for the meeting, where Cardinal Bechara Rai, patriarch of Maronite Catholics, will deliver a speech on the challenges Maronites face in Canada and other countries. Canadian bishops are also expected to talk about their upcoming new document to prevent the abuse of those most vulnerable and the reconciliation efforts with First Nations, among other things.

NEXT: One-stop shop: Clinic helps Guatemalans with more than health