Catholics, Pentecostals should learn from each other, pope says 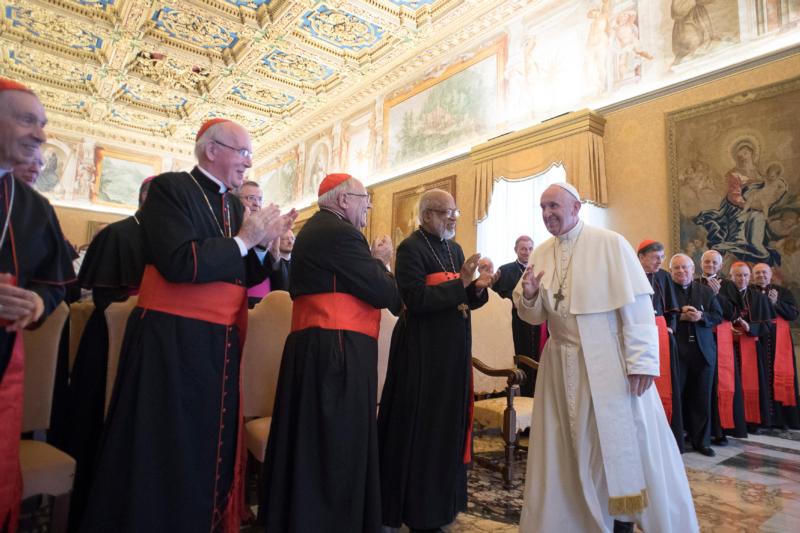 Pope Francis meets Sept. 28 at the Vatican with members of the Pontifical Council for Promoting Christian Unity. The council was holding its annual plenary meeting, which focused on relations between Catholics and Pentecostal and evangelical Christians. (CNS photo/Vatican Media)

VATICAN CITY (CNS) — Pope Francis said many Catholics share his initial thoughts about the worship of charismatic Christians — “that more than prayer meetings they seem to be samba schools” — but he is convinced God wants Catholics and Pentecostals to learn from each other.

Catholics can appreciate the way Pentecostals “live their faith, give praise to God and witness to the Gospel of charity,” although “often in ways different than we are used to,” the pope said Sept. 28 during a meeting with members of the Pontifical Council for Promoting Christian Unity.

Pentecostals, on the other hand, should be helped to “overcome their prejudices about the Catholic Church and recognize that in the invaluable treasure of the tradition received from the apostles and safeguarded throughout history, the Holy Spirit has, in fact, not been extinguished or suffocated, but continues to work effectively,” the pope said.

Council members were holding their plenary meeting, which focused on relations with Pentecostals, charismatics and evangelical Christians.

Departing from his prepared text, Pope Francis said he wanted to share “a personal experience and a ‘mea culpa,'” a request for forgiveness. He explained, as he has done in the past, that when he was Jesuit provincial of Argentina, he had forbidden Jesuits to form relationships with charismatics and their “samba schools.”

“Later, I apologized and as a bishop, I had a good relationship with them,” including attending charismatic Catholic Masses in the Buenos Aires cathedral.

Catholics cannot ignore the growth of Pentecostalism and the fact that many Catholics are attracted away from the Catholic Church by what they find in Pentecostal and evangelical communities.

Catholics also cannot ignore “the sudden appearance of new communities, tied to the personality of some preachers” and how that “contrasts sharply with the ecclesiological principles and experience of the historic churches,” the pope said.

Still, he said, the growth of those communities should be, “on our part, a motive for personal examination and pastoral renewal,” especially in helping Catholics learn to love and pray with the Bible and to be open to the promptings of the Holy Spirit, “who leads people to love, witness and serve.”

“The church grows in fidelity to the Holy Spirit the more it learns to not try to domesticate it, but to welcome it without fear” while exercising discernment to understand whether what is new is what God wants for the church, Pope Francis said.

“The Holy Spirit is always newness. Always. And we must get used to it. It is a newness that helps us understand things more deeply, with more light, and makes us change our routine, even disciplinary routines,” he said, without further explanation.