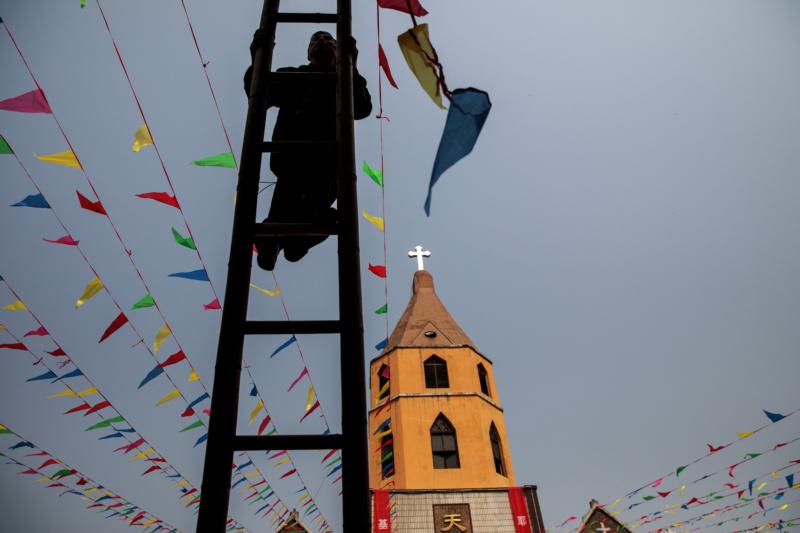 A man decorates at a Catholic church March 31, a day before Easter in China’s Youtong village. Catholics in Macau, Taiwan and Hong Kong are divided over the provisional agreement between China and the Vatican on the appointment of bishops. (CNS photo/Damir Sagolj, Reuters)

HONG KONG (CNS) — Catholics in Macau, Taiwan and Hong Kong are divided over the provisional agreement between China and the Vatican on the appointment of bishops.

Some believe it will lead to better diplomatic relations, but others question how Beijing’s clampdown on religious freedom is compatible with a fruitful relationship with the Catholic Church, reported ucanews.com.

Bishop Stephen Lee Bun-sang of Macau said the agreement signed Sept. 22 offers Catholics in mainland China the chance to be in communion with the universal church.

He said the agreement was achieved through sustained study and dialogue, and he encouraged Catholics in Macau to continue their prayers for the progress of China-Vatican relations. He said he hoped “the provisional agreement could truly be implemented,” contributing to Chinese society, and that the charity, pastoral work, social services and education provided by the church would help the spread of the Gospel of Jesus Christ.

Father Otfried Chen, secretary-general of the Taiwan bishops’ conference, told Radio Veritas the agreement “is purely pastoral and is about the appointment of bishops, and is, therefore, a very internal matter of the church but of a provisional nature.”

“Should the Holy See take a proactive role in her dialogue with mainland China?” he asked, adding that he thinks it is necessary.

Father Chen said the pope is different from other political leaders. The pope is the leader of all the faithful around the world, including 12 million Catholics on the mainland. Both Chinese Catholic communities — those whose leaders have registered with the government and those who have refused to register — “by no means can keep direct contact with the pope.” The pope, therefore, thinks of every possible method to enhance communication.

“This is a form of communication. It is not an establishment of diplomatic relations,” he stressed.

Father Chen said he thinks the most important issue is how to continue the progress.

“Only God has the answer,” he said, adding that God takes control over history and everything. He encouraged laypeople to pray often for Pope Francis and recite the prayer written by Pope Benedict XVI dedicated to Our Lady of Sheshan.

Anthony Lam Sui-ki, a senior researcher at the Holy Spirit Study Centre of Hong Kong, said the signing of the provisional agreement is good by its nature. It shows that the Chinese government believes that the church is not threatening and there is no hidden agenda.

Lam suggested a transition period is needed for Catholics from underground communities so that they can adapt to the new environment.

Taking the liturgical reform introduced by the Second Vatican Council as an example, Lam said many priests left the church as a rejection of celebrating Mass in vernacular language instead of Latin. After 50 years or so, it is now found that “the language itself is only a tool for evangelization. We then need to adapt and change,” he said.

Speaking about the new environment that underground communities will face, Lam admitted that he knows nothing about the content of the agreement. He said he believes that “many things will have to be reported to the government” and the space that underground communities enjoyed would become smaller. Yet “this constraint does not twist the faith, and there is still space to keep the faith intact,” Lam said.

Lam pointed out that now-retired Pope Benedict XVI once described the underground church community in China as an unusual phenomenon, and now Pope Francis would ask underground communities “to surface” after a proper arrangement is made by the Chinese government.

He expected that the Chinese government would not become “so unreasonable” or add any unnecessary conflicts. Nonetheless, he stressed, it cannot be expected that all problems can be solved by one single agreement.

Lam also said he hopes the agreement will speed up the ordinations of about two dozen bishops who have already been appointed by the pope.

Monica, a layperson from Taiwan, told ucanews.com that the agreement is not good news for Taiwan’s diplomacy. She said the Vatican, with its ethical and moral strength, should reject the “one China” framework in accordance with the reality that China and Taiwan have independent governance. She added that it would allow recognizing both places diplomatically.

A foreign missionary who serves in Hong Kong and asked that his name not be used expressed his support for the signing of the agreement but told ucanews.com it was not good timing as the Chinese government was strictly controlling religions. He doubted Beijing’s sincerity toward the church.

Patrick Poon, a Hong Kong Catholic, said he believes that the agreement lacks transparency and sets a very bad precedent.

“If the Chinese government adopts a similar approach to other religions, religious freedom will vanish in China, as only those following the government’s arrangement will be able to survive,” he said.

Poon said people are worried that the Chinese government will legitimately control the appointment of bishops in the future. He questioned whether the pope would exercise his veto power if it risked destroying the relationship with Beijing.

Kenneth Chan Ka-lok, who initiated an online petition in February urging the Holy See to rethink the agreement and stop making an “irreversible and regrettable” mistake, told ucanews.com it was naive to sign an agreement with a regime that suppressed freedom of religious beliefs and demanded that clergy be “politically reliable.”

“I am afraid that it will be surrender instead of communion,” he said, pointing out that the timing of the agreement could not be worse in view of recent suppression.

NEXT: Former nuncio claims Vatican official has evidence of cover-up