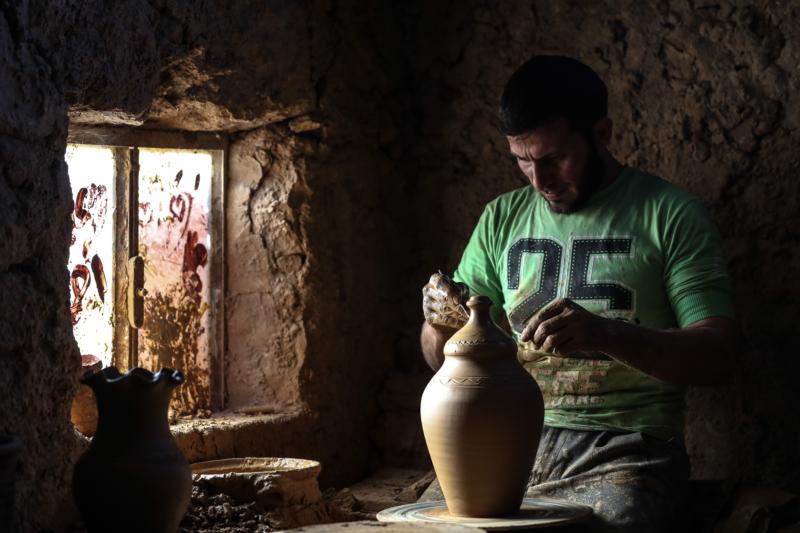 A Syrian man works on a clay pot in early July at a traditional pottery workshop in Idlib. (CNS photo/Mohammed Badra, EPA)

AMMAN, Jordan (CNS) — Christians and other civilians inside Idlib, Syria, are fearful of an impending, all-out offensive by their government and its Russian and Iranian backers on the northwestern province, the last rebel stronghold and presumed endgame in Syria’s more than seven-year-old war.

“A Franciscan father told us that the situation in Idlib is really bad, the people are very scared. They don’t know what will happen and it’s unclear what is actually taking place,” Andrea Avveduto, communications chief for Pro Terra Sancta, told Catholic News Service Sept. 17. The association, based in Jerusalem and Milan, supports the Franciscan Custody of the Holy Land.

Russia and Turkey agreed Sept. 17 to create a demilitarized buffer zone in Idlib province to separate government forces from rebel fighters based there. It is unclear whether the zone, expected to come into force by Oct. 15, would help avert an all-out assault on the rebel-held area, as Syrian President Bashar Assad has vowed to regain the region.

Pope Francis, U.S. President Donald Trump and the United Nations have all warned of a “humanitarian catastrophe” unfolding should Syria, Russia and Iran go forward with an attack on Idlib. Jan Egeland, who heads the U.N.’s humanitarian task force for Syria, has liken the anticipated assault to conducting a “war in a refugee camp.”

Some 3 million civilians live in Idlib province. Many are internally displaced from other war-torn parts of the country, while 30,000 Islamist fighters and supporters have also sought sanctuary there from Syrian areas recaptured by the regime. Large numbers of civilians are crowded into unsanitary camps or sleeping in the open.

During recent remarks to thousands gathered in St. Peter’s Square, Pope Francis urged the international community “to make use of the instruments of diplomacy, dialogue and negotiations, in compliance with international humanitarian law and to safeguard the lives of civilians” in Idlib.

Avveduto told CNS by phone, “Since the beginning of the war in 2011, we started to support the Franciscan fathers in Syria by opening four emergency centers — in Damascus, Aleppo, Latakia and Knayeh (in Idlib province) — to support people affected by the war.

“We give the people food, nonfood items, and medicines, and we also support the education of the children, as a lot of schools have closed in these years of war,” he said, noting the Franciscans support families without regard to their religion.

In Idlib province, there are Christians in Knayeh and Yacoubieh, but the villages are occupied by Nusra Front, as al-Qaida is known in Syria, Avveduto said.

Christians can stay in those villages, “but they have to obey the law set by the jihadists who are occupying their towns,” Avveduto explained. The front has been fighting against Syrian government forces to establish an Islamic state in the country.

“There are a lot of difficulties” for Christians, Avveduto said. “They can’t display the cross outside. Al Nusra forbids them to show any Christian symbols. … It’s a very critical situation. We hope it can finish soon. But until now, we continue to help people.”

“We have been told that it is still possible for people to go out from their homes during some periods of the day. It’s forbidden to celebrate the Mass. But sometimes it is possible to go out to take some food and assistance to people. In this moment, they must survive the situation now. We try to give all the support to enable the people of the region to live,” Avveduto said.

He also warned that some people are being kidnapped with demands for ransom.

Assad has vowed to target only opposition fighters in Idlib, but some aid groups fear a bloodbath is looming. Russian warplanes have been picking off strategic points in Idlib, which Russia calls a “nest of terrorists.”

UNICEF said more than a million children are at risk in the event of an assault and has drawn up contingency plans to provide clean water, medicine and food supplies.

An all-out attack would overwhelm already struggling health facilities, cut off food and medical supplies to desperate civilians, and prompt massive levels of displacement, the U.N. said, estimating that as many as 800,000 could be displaced.

The U.S. government has warned that it will hold the Assad government and Moscow accountable for any escalation in Idlib, including the use of chemical weapons.

Avveduto said that, during a recent meeting in Rome, church leaders from Syria expressed concerns that the war might expand.

“They are very worried not just for Idlib but also for Aleppo, because if the Turkish army enters that area and zone, the big fear is that the war can expand. The situation could worsen. The area is at Turkey’s frontier,” Avveduto said. “Other countries could enter the war and create an even bigger problem, an even bigger conflict.”

Across Syria, already some 7 million people have been displaced internally. The conflict, which began in March 2011, has left more than 350,000 people dead.