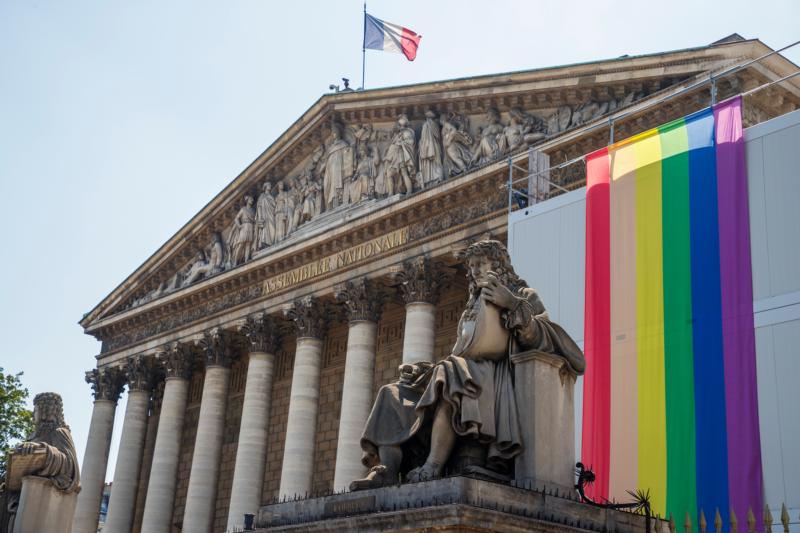 The LGBT rainbow flag is displayed on the facade of the National Assembly in Paris. (CNS photo/Christopher Petit Tesson, EPA)

PARIS (CNS) — The French bishops said proposals to extend fertility treatments to lesbian couples and single women would harm society by removing fatherhood from the lives of children.

In an eight-page statement published Sept. 20, the bishops predicted that liberalization of the law also would lead to the social acceptance of surrogacy, the rise of eugenics and the notion that children were commodities to please adults.

They said opening medically assisted procreation to all women would remove biological and social references to fathers from the family and “would undermine the good of the child, who would be deprived of his reference to double parentage, whatever his mental abilities of adaptation.”

“The legal suppression of the father would socially encourage the reduction or even the eviction of the father’s responsibilities,” said the statement, “The Dignity of Procreation.”

“Such a drift would pose not only an anthropological but also a psychological and social problem,” the statement said.

“Could we collectively accept that man is considered a mere supplier of genetic materials and that human procreation is thus akin to manufacturing?” it asked.

The protection of the anonymity of sperm donors in any forthcoming reforms also would create an “unjust power” over children and adults distressed about their true origins, the statement continued, with the bishops suggesting that such an “injustice” should not be tolerated.

The proposals would allow widows to conceive children from a dead spouse by using frozen sperm, they warned, adding: “Is it the interest of the child to be born fatherless and in such a context of mourning?”

The bishops said children possessed human dignity so no amount of adult anxiety over the desire for a child could reduce them to products that were manufactured, sold or made into instruments for the service of others.

Stable marriage between a man and a woman was the “optimal environment for procreation and the reception of a child,” the bishops argued, because it guaranteed the dignity of both children and adults.

The bishops also criticized the destruction of surplus human embryos during some fertility treatments, saying they were worthy of the same respect as those that were allowed to grow into a baby.

The document was written by Archbishop Pierre d’Ornellas of Rennes, the head of a working group on bioethics of the French bishops’ conference, with the help of legal advisers, but has been co-signed by all the French bishops.

At present, French law limits assisted procreation solely to adult heterosexual couples, but President Emmanuel Macron has promised to change the law. French media have reported that a bill is likely to be introduced in Parliament in 2019.

In their foreword to their statement, the bishops said they were intervening because they wished to offer an ethical perspective on the forthcoming debates, based on reason and in the spirit of dialogue.

NEXT: Mary shows way to unity in church, bishop of Lourdes says in Jordan