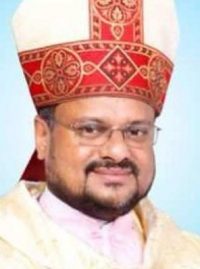 COCHIN, India (CNS) — An Indian Catholic nun who claims a bishop raped her has accused the Vatican and senior church officials of inaction and silence despite her repeated complaints, but the bishop says the accusations are baseless.

Ucanews.com reported that in a fresh complaint addressed to India’s apostolic nuncio, Archbishop Giambattista Diquattro, Sept. 8, the nun said she first complained to the church in June 2017 that she had been raped by Bishop Franco Mulakkal of Jalandhar.

A year later in her June 28 police complaint, she accused Bishop Mulakkal, patron of her diocesan congregation, the Missionaries of Jesus, of raping her 13 times from 2014 to 2016 at her convent when he visited Kerala from his diocese in Punjab state.

Bishop Mulakkal claims the accusations are baseless and aim to deflate the disciplinary action he had initiated against the nun for her violation of religious vows, including disobedience and sexual relations with a man.

Her first complaint was to her parish priest and the local bishop. She has since sent complaints to several Indian bishops connected with the congregation, including the nuncio and Cardinal George Alencherry, major archbishop of the Syro-Malabar Catholic Church, based in Kerala.

However, she did not see any action initiated against Bishop Mulakkal and did not get a response from the nuncio, she said.

After waiting a month, she sent letters of complaint to Pope Francis; Cardinal Pietro Parolin, Vatican secretary of state; and the prefects of the congregations for Bishops and for the Doctrine of the Faith. She said she received no response other than the delivery note of the courier company.

Ucanews.com reported her latest letter said Bishop Mulakkal had harassed several nuns and forced at least 20 to leave in the past five years.

More than two months after police began to investigate the case, “Bishop Franco is functioning freely with all his privileges. … The silence and inaction on the part of the authorities of the Catholic Church in India is adding to the impunity that he enjoys before the law of the land,” the nun said.

She also explained why she had allowed herself to be abused repeatedly: “I had tremendous fear and shame to bring this out into the open. I feared suppression of the congregation and threats to my family members.”

She said many women and nuns suffer clerical abuse. Silence and inaction on the part of church officials to stem clerical abuse will have a “very adverse effect” on women and result in the church losing its credibility, she said.

She wanted the church to initiate an inquiry into her allegations while suspending the bishop from his office. She claimed the bishop is using the church’s money and his political clout to scuttle the investigation.

“We feel the Catholic Church is having concern only for bishops and priests. We would like to know if there is any provision in canon law for justice for sisters and women,” her complaint noted.

NEXT: Leaked German report shows 3,700 cases of abuse of minors in 68 years