Longtime papal photographer talks about life behind the lens 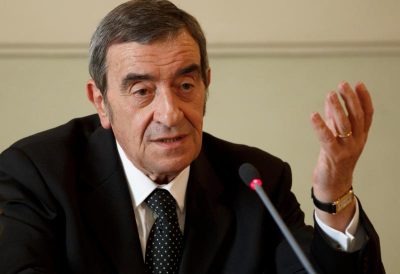 WASHINGTON (CNS) — While Arturo Mari may have started his professional photography career in the Vatican taking pictures of Pope Pius XII when he was just 16 years old, Mari’s work commanded the world’s attention when he accompanied history’s most travel-minded pope, St. John Paul II, on more than 100 pastoral visits outside Italy.

Mari was first drawn to the Polish pontiff during the Second Vatican Council and a young Bishop Karol Wojtyla was making interventions from the floor during the council’s deliberations.

“He was very delicate,” Mari said through an interpreter Sept. 26 during the conference “Ronald Reagan & Pope John Paul II: The Partnership That Changed the World,” “but he was very firm.”

He may not have had another close encounter with the Slavic prelate until Oct. 6, 1978, when Mari was assigned to take photographs of the new pope elected by the College of Cardinals. “The doors of the Sistine Chapel opened, I was on the other side of them, and there he was, dressed in white,” he recalled.

“He treated me like a son, and I considered him my father.”

The days were long during St. John Paul’s 26-year pontificate. “I had to be at work at 6:20 in the morning, because the first event every day was morning Mass at seven. And then there were the audiences,” Mari said. His typical day would not end until 10:30 p.m. or so.

“When people like Ronald Reagan came, I would work until 11:30 or midnight, or three in the morning, in one swoop,” Mari said.

The photographer remained impressed with “the humility of John Paul II, his charity, his piety,” as he snapped countless photos of him engaged in prayer, in conversation or in service either inside the Vatican or throughout the world.

Mari, who retired in 2007 at age 67 after serving 51 years as a Vatican photographer, recounted story after story of the pope’s encounters on his travels. With each story, Mari marveled at the mercy and humility of his boss, who was the subject of his photos.

One story involved a 3-year-old boy in Africa who was seemingly lifeless until St. John Paul picked him up, cooed to him and began tickling him, at which point, the lad began to smile, his parents began to shout and weep, and the boy’s siblings emerged from under their brother’s hospital bed to play with the pope themselves.

Another story involved a girl not even 2 years old, also in a hospital, whose eyes were shut. Then the pope picked her up and cradled her in his arms, and the girl’s eyes began to open. “And they were such big, beautiful eyes,” Mari remarked.

But he may have been moved most by St. John Paul’s suffering in his last days, as Parkinson’s disease ravaged the pope’s body. Yet it was, Mari said, “a suffering he shared with the world.”

NEXT: Reach out to unmarried couples, support newlyweds, pope urges