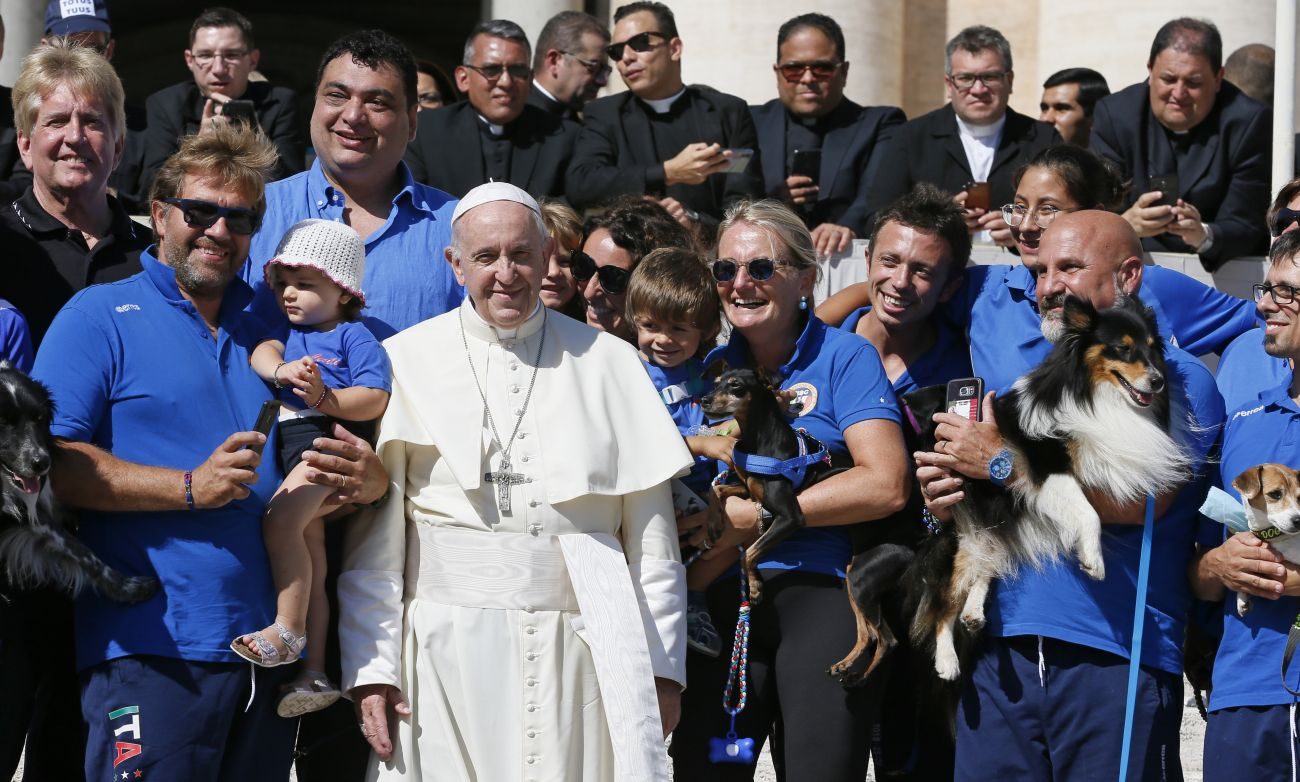 VATICAN CITY (CNS) — Only true love for God and neighbor can destroy the chains of greed, lust, anger and envy that enslave humankind, Pope Francis said.

“True love is true freedom: It detaches from possession, rebuilds relationships, it knows how to welcome and value the neighbor, it transforms every struggle into a joyous gift and makes communion possible,” the pope said Sept. 12 during his weekly general audience.

Before addressing thousands of men, women and children, the pope made his way around St. Peter’s Square and greeted excited pilgrims lined up along the popemobile route.

While making his rounds, the pope abruptly ordered his driver to stop. He made his way to two disabled children and blessed them. The mother of one of the children, overcome with emotion, reverently kissed Pope Francis’ hand before he boarded the popemobile.

Continuing his series of talks on the Ten Commandments, the pope reflected on the Third Commandment, “Remember to keep holy the Sabbath day.”

The commandment to rest on the Sabbath was linked to the memory of Israel’s freedom from slavery in Egypt, he said, because slaves “by definition cannot rest.”

“There are many types of slavery, both exterior and interior,” the pope said. “There are external constraints such as lives sequestered by violence and other types of injustice. There are also interior prisons that are, for example, psychological blocks, complexes, limitations and more.”

Recalling the lives of St. Maximilian Kolbe and Cardinal Francois Nguyen Van Thuan, both of whom “turned dark oppressions into places of light,” the pope said their example proved that people who are physically or mentally imprisoned “can remain free.”

Nevertheless, he also warned that slavery to one’s ego can tie men and women down “more than a prison, more than a panic attack and more than any sort of imposition.”

The pope explained that the “deadly sins,” such as greed, lust, gluttony and sloth can turn people into slaves of their own passions, while others such as anger ruin relationships and envy can sicken a person like a disease.

“Some writers say that envy turns the body and soul yellow, just like when a person who has hepatitis turns yellow,” he said. “The souls of envious people are yellow because they can never have the freshness of a healthy soul.”

Pope Francis said that through his death and resurrection, Christ overcame “the slavery of our heart with his love and salvation” and guides Christians toward true freedom where every person “can find rest in mercy and freedom in truth.”

“True love frees us even in prison, even if we are weak and limited,” Pope Francis said. “This is the freedom that we receive from our redeemer, our Lord Jesus Christ.”

PREVIOUS: Pope says he hopes to visit Japan in 2019

NEXT: Pope accepts resignation of Brazilian bishop arrested for embezzlement