Media reporting Vatican-China agreement could be signed in late September 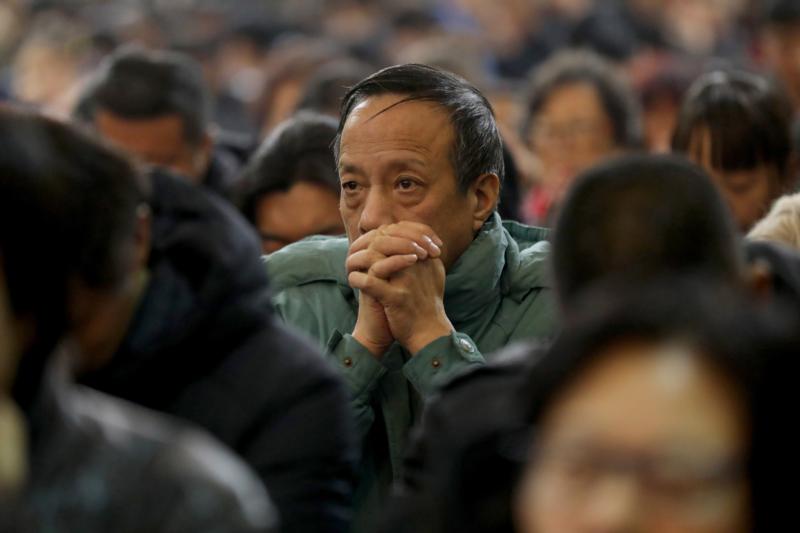 A man prays during Mass in 2017 at in the Church of the Immaculate Conception in Beijing. Sources say a long-awaited Vatican agreement with China, expected to be signed soon, only solves some of the issues of the church in China. (CNS photo/Wu Hong, EPA)

HONG KONG (CNS) — The long-awaited Sino-Vatican agreement on the nomination of bishops is expected to be signed in September, reported several media outlets.

Vatican spokesmen have said only that talks are ongoing. But a Vatican source told America magazine, the New York-based weekly published by the Jesuits, that the deal is due to be signed in Beijing before the end of September, but the report said the text of the agreement will not be made public even after the signing.

The same day, the online Global Times, an English-language newspaper close to the Chinese Communist Party, also reported that the Vatican would send a delegation to China in late September “and, if the meeting goes well, the agreement would be signed.”

Ucanews.com reported the source told America the agreement is provisional and, although the Holy See recognized it is not a good one, it is the only possible way to open “the door to developing constructive and improving dialogue with the world’s emerging superpower.”

According to the report, the agreement only deals with the nomination of bishops. Candidates will be chosen at the diocesan level through the democratic election system, and the results of these elections will be sent to Beijing authorities to examine and then submit a name via diplomatic channels to the Holy See.

The Holy See will carry out its own investigation of the candidate before the pope either approves or exercises his veto, the report said. This is the case in many Chinese dioceses currently and, for several years, China has not appointed any bishop not recognized by the Holy See.

The report said that if the pope approves the candidate, the process will continue. If not, “both sides will engage in a dialogue, and Beijing would eventually be expected to submit the name of another candidate.”

Both reports also said Pope Francis would recognize seven bishops ordained by the pope without Vatican approval, including some it had excommunicated. All seven had previously asked for reconciliation with the pope, ucanews.com reported.

It said many Catholics on the mainland said they believed it would be a two-year interim agreement.

One priest, a member of a registered community of Catholics, expressed support for the agreement, saying the Holy See could directly convey information and directly manage clerics in China so that the mainland church can be standardized and normalized.

But an underground Catholic told ucanews.com that the agreement only reached a consensus on the appointment of bishops, which would not help to alleviate China’s suppression of religion.

A source in Sichuan province told ucanews.com that the church surely would give in and choose the lesser of two evils. He believed that the sanction of illegitimate bishops “is the privilege of the pope, and we could only reluctantly obey.”

The Global Times sources stressed that ongoing negotiations will stay on the religious level and not touch on any political issue such as the establishment of diplomatic ties between Beijing and the Vatican.

Cardinal Joseph Zen Ze-kiun, retired bishop of Hong Kong, told Bloomberg News Network that the agreement is a “plot” that would bring tragic and long-term consequences not only to the Catholic Church in China but also to the entire church. He also said the agreement could clear a hurdle for establishing diplomatic relations with Beijing but may incur a schism among the local faithful.

Earlier this year, Cardinal Zen said if a deal is signed, he would not go against the pope. “I will accept defeat, retire in silence.”

America reported that at the end of December 2017, there were 65 bishops of the open church community recognized by Chinese authorities and 36 of the underground community who do not have official recognition. Some have since died.

The report said there were still many questions, including the situation of underground bishops and their communities; the status of the Chinese bishops’ conference (not recognized by Rome because only Beijing-approved bishops belong to it); the number of dioceses in China (the Vatican claims there are 144, including 32 vicariates or prefectures, while Beijing insists there are 96); and the possibility for Chinese bishops to freely visit the Holy See and for Vatican officials to visit them.

PREVIOUS: When it comes to abuse, church isn’t above the law, bishop says