‘Our people have overcome,’ Syriac Catholic patriarch says in Aleppo 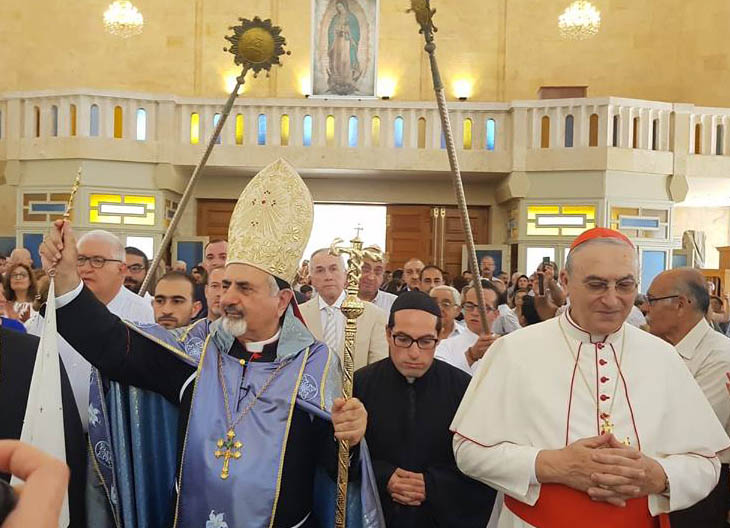 BEIRUT (CNS) — In war-torn Aleppo, Syria, the Syriac Catholic patriarch proclaimed that “the will of life has overcome death; hope and security have overcome despair and chaos. Our people have overcome.”

Celebrating Mass Sept. 9 at the inauguration and rededication of the restored Our Lady of the Assumption Syriac Catholic Cathedral, Patriarch Ignace Joseph III Younan said, “We will always be people of hope and life.”

The cathedral’s inaugural Mass, filled with worshippers, was attended by Cardinal Mario Zenari, the Vatican nuncio to Syria; bishops of other Christian churches; and representatives of Aleppo civil authorities.

The patriarch led a procession through the nearby streets to the restored cathedral, then cut a white ribbon fastened to the main door and entered.

In his homily, Patriarch Younan recalled his visit to Aleppo in 2017, when he celebrated Palm Sunday Mass in the damaged cathedral with the faithful assembled under umbrellas “because the rain was falling on us from all sides of this cathedral.”

“We are gathered today to sing thanks and praise to the Lord who gave us this wonderful gift to be able to repair this cathedral in order to recuperate its beauty of the past. We are so delighted to come once again and pray with you, in this cathedral so dear to you,” the patriarch said.

“For many years, this house of God suffered a lot of devastation, being at the demarcation line with terrorists. It is now restored for worship, a sign of hope and victory of the good over the evil that destroyed so many churches and mosques in this beloved city, Aleppo,” Patriarch Younan said. He noted that Aleppo was recognized for centuries as the most important center for many Christian communities.

“During the horrendous siege at the hands of criminals that lasted four years, this second-largest and prosperous city of Syria was deprived of basic necessities,” the patriarch said. “You lacked water, food, fuel and electricity. All this happened under the eyes of the ‘civilized’ world.'”

“You and hundreds of thousands of civilians under the ruling of the legitimate Syrian government were forgotten, abandoned even manipulated by those opportunistic geo-politicians of our present time,” he said.

In December 2016, the Syrian army retook control of almost the entire city of Aleppo. The city had been split between government and rebel control since 2012.

“Aleppo has returned, and Syria will return to its previous glory, and even more beautiful, because there are many civil and spiritual officials who felt the duty of their responsibilities to serve … with integrity and honesty,” Patriarch Younan said.

“We should first thank God almighty that helped you, beloved brothers and sisters, under the leadership of our brother-Archbishop Antoine Chahda (of Aleppo), to undertake the hard and costly works of repairing this wonderful cathedral built in the 1970s,” the patriarch said.

He thanked the “generous benefactors” from the archdiocese, Catholic organizations and the government of Hungary.

“We owe to our Catholic brothers and sisters from around the world a lot of appreciation and gratitude for the charitable and unconditional solidarity toward us and all Christians of the Middle East, most particularly the two beleaguered countries of Syria and Iraq,” Patriarch Younan said.

The Mass commemorated the feast of the Nativity of the Virgin Mary.

“Our thanks go to our heavenly Virgin Mary, who protected the faithful of this cathedral, and protected the people of Aleppo,” the patriarch said. He stressed that Aleppo still needs her intercession after so much suffering and prayed that she would grant the Middle East “a true peace and unshakable security based on justice for all.”

He also prayed that she would hasten the return of Syrians who migrated to other countries.

The patriarch’s four-day visit to Syria from the patriarchate in Beirut included meetings with government officials and Muslim clerics. During the Mass at the restored cathedral, the patriarch ordained six new deacons.

PREVIOUS: Satan is attacking bishops; they must fight with prayer, pope says

NEXT: African bishops want action on priests who remain in Europe