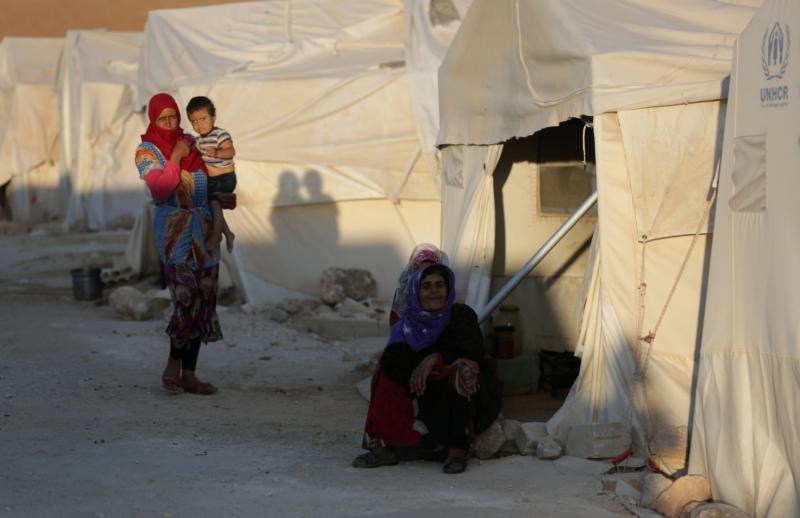 An internally displaced Syrian woman walks with a child outside a tent July 30 in Idlib, Syria. Pope Francis during his Sept. 2 Angelus appealed for peace and dialogue as the Syrian government and its allies prepare to launch strikes against the last major rebel stronghold in Idlib province in the country’s northwest. (CNS photo/Khalil Ashawi, pool via Reuters)

VATICAN CITY (CNS) — Pope Francis appealed for peace and dialogue as the Syrian government and its allies prepare to launch strikes against the last major rebel stronghold in Idlib province in the country’s northwest.

Speaking to hundreds of pilgrims gathered in St. Peter’s Square for his Sunday Angelus address Sept. 2, the pope warned that “the winds of war continue to blow” in the already war-weary country.

An attack against the Syrian province’s nearly 3 million people, he said, would cause “a humanitarian catastrophe.”

“I renew my heartfelt appeal to the international community and to all the actors involved to make use of the instruments of diplomacy, dialogue and negotiations, in compliance with international humanitarian law and to safeguard the lives of civilians,” the pope said.

Several world leaders had expressed concern over the looming attack and the possible use of chemical weapons by Syrian forces.

Syrian army warplanes allegedly flew over and bombed the eastern town of Douma, 15 miles north of Damascus, in a suspected chemical-weapon attack April 7. Despite the accounts of witnesses, the Syrian government denied involvement in the attack.

The pope’s appeal echoed the sentiments of the United Nations and the United States, who have expressed similar concerns and fears that Syria, led by President Bashir al-Assad, would use chemical weapons against innocent civilians.

Antonio Guterres, U.N. secretary-general, urged Syria and its allies, which include Russia, Turkey and Iran, “to exercise restraint and to prioritize the protection of civilians.”

“The secretary-general is deeply concerned about the growing risks of a humanitarian catastrophe in the event of a full-scale military operation in Idlib province in Syria. The secretary-general once again reaffirms that any use of chemical weapons is totally unacceptable,” a U.N. statement said Aug. 29.

On the same day Pope Francis made his appeal, U.S. President Donald Trump warned President al-Assad to “not recklessly attack Idlib province” and said Syria and its allies would be “making a grave humanitarian mistake to take part in this potential human tragedy.”

“Hundreds of thousands of people could be killed. Don’t let that happen!” President Trump tweeted.