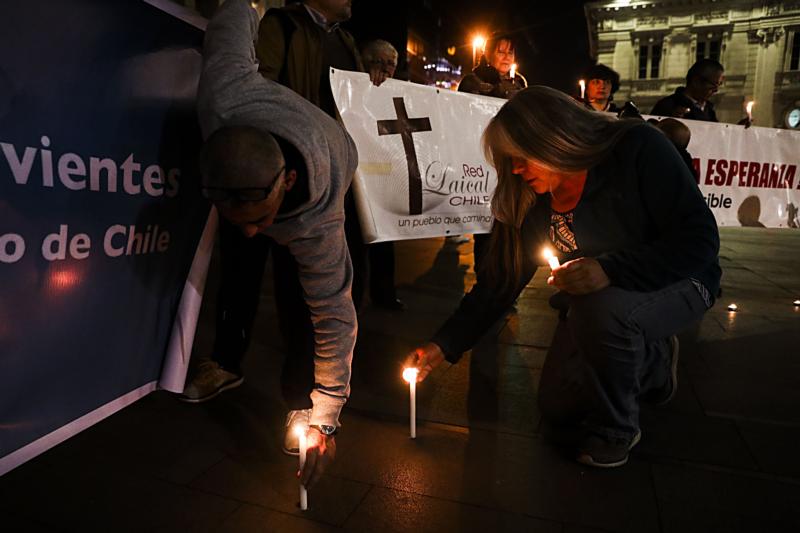 People place candles in front of the Metropolitan Cathedral of Santiago Aug. 20 during a demonstration against sexual abuse committed in the Chilean Catholic Church. Pope Francis accepted the resignations of two more Chilean bishops, bringing to seven the number of bishops who have stepped down since June in response to the clerical sexual abuse scandal in their country. (CNS photo/Alberto Pena, EPA)

VATICAN CITY (CNS) — Pope Francis accepted the resignations of two more Chilean bishops, bringing to seven the number of bishops who have stepped down since June in response to the clerical sexual abuse scandal in their country.

Almost every one of the 34 bishops in Chile had offered his resignation to Pope Francis in mid-May after a three-day meeting at the Vatican to discuss the clerical sexual abuse scandal detailed in a 2,300-page report compiled by Archbishop Charles Scicluna of Malta and his aide, Father Jordi Bertomeu.

In a commentary published in April on the website of the Sacred Heart Fathers, Father Perez, his order’s delegate for handling abuse claims, praised Pope Francis’ letter to the Catholics of Chile on the abuse scandal, but said that more needed to be done, including the resignation of several bishops, especially any who were connected to Father Karadima.

“I cannot claim they committed crimes — I do not know — but the damaging impact of Karadima’s abuse” would make it difficult to rebuild the church in Chile as long as anyone connected to him remains in office, Father Perez wrote.

The priest also called in his commentary for the resignation of 76-year-old Cardinal Ricardo Ezzati of Santiago; Cardinal Francisco Errazuriz Ossa’s resignation from the pope’s international Council of Cardinals of Cardinal; and the reassignment of 65-year-old Archbishop Ivo Scapolo, who has served as nuncio to Chile since 2011.

Father Perez wrote that Archbishop Scapolo “has not been and will not be the person with the sensitivity and skills needed to support a church in crisis like the Chilean one,” and, he said, if Pope Francis had not been accurately informed about what was going on in Chile, one can presume that was partly the nuncio’s fault.

PREVIOUS: Pope: Those exploiting foreigners for profit will pay on Judgment Day

NEXT: Police arrest Indian bishop, charge him with rape