‘Two steps forward, one step back’: Vatican diplomacy with China 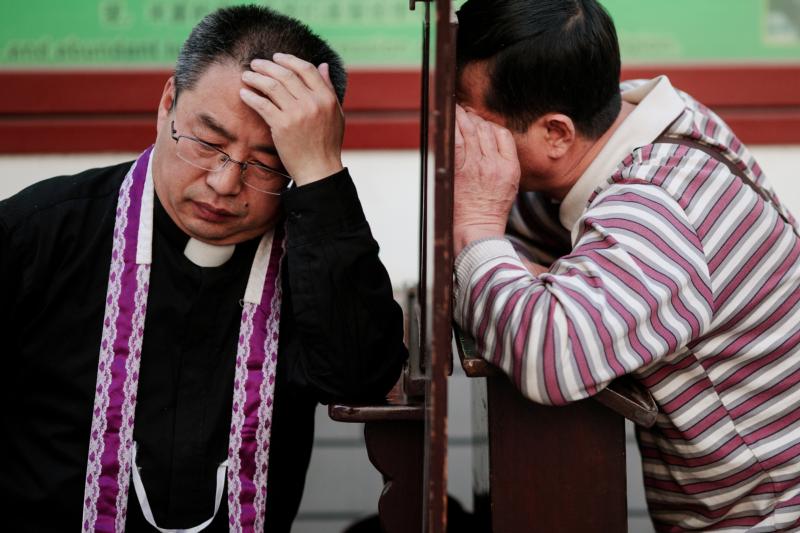 A priest hears confession on Holy Thursday, March 29, at the Cathedral of the Immaculate Conception in Beijing. For the first time in decades, all of the Catholic bishops in China are in full communion with the pope, the Vatican announced Sept. 22. (CNS photo/Damir Sagolj, Reuters)

BANGKOK (CNS) — When Deng Xiaoping took charge of the Chinese Communist Party in late 1978 and announced his program of reform, it was the beginning of the end of 39 years of isolation for China’s Christians.

The year 1978 was also the beginning of the 27-year papacy of St. John Paul II, and it has taken another 40 years of slow progress and some backward steps for the Vatican to reach its first official agreement with Beijing after China cut ties with the Holy See in 1951. The provisional agreement, announced Sept. 22, concerns the appointment of bishops in China.

Pope Francis has described the negotiations “two steps forward, one step back. But in a message to Chinese Catholics, he said he hoped it would begin an “unprecedented process that we hope will help to heal the wounds of the past, restore full communion among all Chinese Catholics, and lead to a phase of greater fraternal cooperation in order to renew our commitment to the mission of proclaiming the Gospel.”

In 1957, China’s communists opted to follow the lead of other communist regimes in Eastern Europe to establish state controlled “national churches.” China’s Catholic Patriotic Association, under which priests were ordained and bishops appointed by the state, was not in communion with the Vatican. The same tactic was undertaken with the four other official religions as the party set up its own bodies to control Buddhism, Taoism, Islam and Protestantism.

This situation created the major, long-term stumbling block to any resumption of official relations with the Holy See. In response, in 1958 Pope Pius XII issued the encyclical “Ad Apostolorum Principis,” condemning the activities of the patriotic association and declaring that bishops who participated in consecrating new bishops selected by the CCPA would be excommunicated.

By 1978, the patriotic association was powerful. Some Catholic leaders chose to join in an effort to build up the church; many bishops who did this secretly pledged loyalty to the pope. Some Catholic leaders refused to join the patriotic association, and these became referred to as underground Catholics. The Chinese government continued persecution and repression of both communities, often in cycles, but Christianity has flourished, with the number of Catholics growing to as many as 12 million and the collective Protestant churches thriving even more, with estimates of as many as 60 million-80 million.

To firm up state control over Catholicism, even as the party became more tolerant, the party created the Bishops’ Conference of the Catholic Church in China, founded with 20 state-approved bishops and which, like the patriotic association, remains unrecognized by Rome.

St. John Paul inherited a church that had fashioned a policy it described as Ostpolitik: keeping communications lines open with communist regimes in Eastern Europe with the aim of winning and building upon small gains. The Vatican strategy was to give Catholics living in repressive regimes full communion with the Vatican and, eventually, establish diplomatic relationships. The Polish pope put China’s communist rulers in the same basket as his home country and other communist Eastern-bloc nations, where Ostpolitik began to yield some success in the 1980s, as the Soviet Union grew weak and eventually collapsed.

“While he reignited an attempted reconciliation with China, John Paul II did not understand China and tried a twin-track approach, conducting both discussions with Beijing and encouraging the underground church,” Lawrence. C. Reardon, assistant professor in political history at the University of New Hampshire and the author of a number of books and research papers on Catholicism in China, told Catholic News Service. The pope appointed a raft of underground bishops not approved by China, angering Beijing.

In 1988, the Vatican issued an advisory that affirmed its rejection of the Chinese Catholic Patriotic Association and regarded some of its members as non-Catholics.

St. John Paul attempted to double down on his efforts to make peace with Beijing but was advised, Reardon says, into a terrible misstep. On Oct. 1, 2000 — Chinese National Day — he canonized 120 martyrs from several hundred years of Chinese history, including some from the Boxer Rebellion of 1900. The Chinese reaction was unequivocal and ferocious. Chinese officials said most of the martyrs were agents of Western imperialism and deserved their fate.

In November 2002, St. John Paul appointed Msgr. Pietro Parolin as undersecretary of state; he would be instrumental in shaping the Vatican’s reconciliation with communist Vietnam and, eventually, China.

After his 2005 election, Pope Benedict XVI made it clear that normalizing ecclesiastical appointments with Hanoi and Beijing would be a focus. Scholars see his 2007 letter to Chinese Catholics, which aimed at making a fresh start, as the beginning of a new phase of negotiations. In it, Pope Benedict said there should be more direct contacts between church and state officials to resolve the problems and declared: “The Holy See always remains open to negotiations, so necessary if the difficulties of the present time are to be overcome.”

When Pope Francis was elected in 2013, he appointed then-Archbishop Parolin as secretary of state, giving the fresh talks on China continuity with the past.

“Francis restarted the negotiations in 2014,” said Missionhurst Father Jeroom Heyndrickx, a member of the Vatican Commission on China, which has not met under Pope Francis. Earlier this year, he told Catholic News Service the Chinese had full trust in Cardinal Parolin and also in retired Archbishop Claudio Maria Celli, who served in the Secretariat of State under St. John Paul.

Archbishop Celli led a working group negotiating with Beijing and, by 2017, according to Hong Kong Cardinal John Tong Hon, agreement had been reached on the nominating process.

Alongside direct Vatican initiatives, there has also been a range of organizations ensuring the proper formation of religious and Catholic laypeople in the post-Vatican II church. For instance, Western church leaders and scholars have been invited to teach at Chinese seminaries.

In the United States, the Maryknoll Fathers and Brothers began the Chinese Seminary Teachers and Formators Project in 1991 to help train priests and women religious for the church in China. Most participants spend an average four years of study in the U.S. On their return to China, they have served in various roles, and at least five graduates were ordained bishops.

The Verbiest Institute in Leuven, Belgium, has facilitated a similar program in Europe.