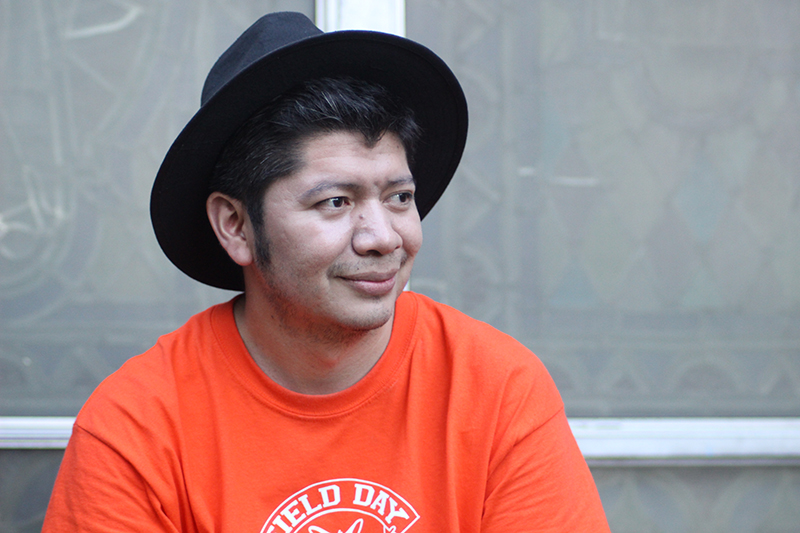 Moises Navarrete, a Salvadoran immigrant to the U.S., believes the legacy of newly canonized St. Oscar Romero is more relevant than ever. (Photo by Gina Christian.)

Moises Navarrete was born five years after St. Oscar Romero was martyred, but the presence of the slain Salvadoran archbishop has been a constant throughout Navarrete’s life.

Romero, an outspoken defender of the poor and marginalized amidst El Salvador’s fierce civil war, was assassinated by right-wing forces while celebrating Mass in 1980. On Oct. 14, he was canonized by Pope Francis, who in his homily lauded Romero for leaving “the security of the world, even his own safety, in order to give his life according to the Gospel.”

Navarette, who immigrated from El Salvador to the United States 15 years ago, grew up listening to recordings of Romero’s homilies, which served as a “voice for the voiceless.” Some 100,000 Salvadorans attended Romero’s funeral, during which 40 were killed after a bomb explosion and armed attacks on the crowd.

Long before his canonization, Romero was a role model for his people, said Navarrete.

“We are taught from childhood to live by his example,” said the 33-year-old, who teaches Spanish at Abington Friends School in Jenkintown.

In particular, Romero’s transformation from a privileged cleric to a shepherd of all Salvadorans inspired hope among the country’s largely disenfranchised population.

“Before, the Catholic Church was with the elite, always with them,” said Naverrete. “Romero started seeing the poor, which is the majority of the country of El Salvador.”

“Most Salvadoran people are humble,” he said. “And we are compassionate because we come from not having much.”

Despite this poverty, Salvadoran culture values generous hospitality, even if it requires sacrifice.

“We give people the best that we have, the best food we have,” Navarrete said. “That goes with being humble; we will treat anybody the same, whether it’s someone who has a lot, or who doesn’t.”

Navarette said that Romero remains relevant not just for El Salvador, but for the United States and other wealthy nations. If Romero were alive today, Navarrete observed, he would challenge U.S. policy regarding migrants and refugees, particularly children.

According to a September 2018 report, more than 12,000 migrant children have been placed in federally contracted detention facilities, up from 2,400 in May 2017.

“He would say, ‘How can we let kids who are innocent people go through this? No kid deserves that,’” said Navarrete.

As the fanfare from the Oct. 14 canonization fades, Navarrete has a simple strategy for carrying on Romero’s legacy.

“Put yourself in the shoes of other people who are not as fortunate as you are,” said Navarette. “If you do that on a daily basis as much as you can, you will be living by his example.”

Local reaction to the canonization of St. Oscar Romero:
Latino Catholics in Phila. inspired by Romero film, canonization
Romero calls us to be people of God who listen, says missionary

PREVIOUS: Romero calls us to be people of God who listen, says missionary

NEXT: Latino Catholics in Phila. inspired by Romero film, canonization