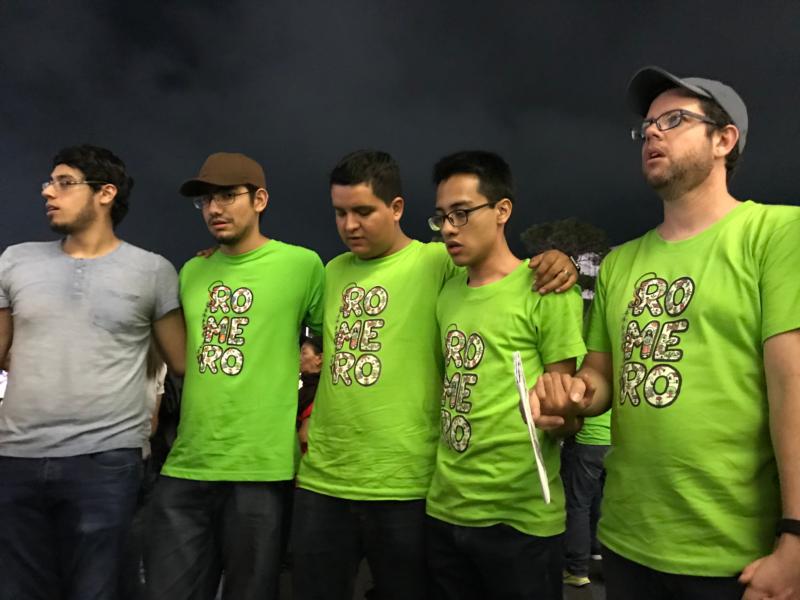 Members of a Marist youth group pray at an Oct. 13 Mass in San Salvador, El Salvador, celebrating the canonization of St. Oscar Romero. St. Romero has become popular among some youth in El Salvador as a voice of reason amid problems such as poverty and violence. (CNS photo/David Agren)

SAN SALVADOR, El Salvador (CNS) — Raul Cardona, 20, considers St. Oscar Romero a hero in his native El Salvador. To show his appreciation, he attended the Mass celebrated outside the Metropolitan Cathedral just prior to St. Romero’s Oct 14 canonization in Rome. But he kept his attendance a secret from his conservative family — telling only his mother — figuring they would disapprove.

“They see him as a guerrilla, as a rebel. It’s something that’s totally polarized,” he said of his family members, who support the right-wing ARENA alliance. A U.N. truth commission named ARENA’s founder as the intellectual author of St. Romero’s slaying.

“As a Salvadoran, as a Catholic … I’ve read a lot about him,” said Cardona, who studies engineering in a Jesuit university. “What he said wasn’t political. It was Christian.”

Salvadorans widely celebrated St. Romero as the Central American country’s first saint. St. Romero was assassinated while celebrating Mass in March 1980 and remains a reviled figure for some on the political right.

But he’s become a national hero for many in the nearly four decades since his assassination. His image adorns everything from barrio murals to passport stamps to political ads.

His popularity is especially visible in the country’s young people, who see him as a straight-talking, prophetic figure from the recent past, whose words still resonate in a country wracked by violence.

Young people often face poor job prospects in El Salvador and have suffered some of its worst violence. Adolescents are often forcibly recruited into gangs, with girls sometimes obliged to become gangsters’ girlfriends. Many parents have started taking their children with them as the flee the country in search of safety.

“El Salvador is still in the top five most violent countries in the world … and here’s a guy who’s speaking out against the violence, that it was senseless, that we need serious transformation, and he had the integrity that he was actually doing this and he stood up in a time when nobody else was saying it,” said Rick Jones, youth and migration adviser at Catholic Relief Services in El Salvador.

“These are people who could not have possibly known him, and yet they’re being inspired by him. Here’s a guy who makes sense in a very polarized context.”

St. Romero’s role in El Salvador can be a polarizing for those in the population with memories of his homilies, which promoted a preference for the poor and scorned the “oligarchy” but were denounced by critics as communism.

The average age in El Salvador is 25.8, according to government statistics. With so much time passing since his death, “many young people have had the opportunity to form their own opinions of him,” said Jennifer Rodriguez, 20, a journalism student at the Mass. “We’re starting from zero with him.”

With problems like poverty and inequality still rife, violence flaring and politicians from the two main parties suffering unpopularity, some observers say St. Romero’s homilies remind many young people of what’s wrong in the country.

“There are a lot of young people unhappy with politics, who see in (St. Romero) a reference in their struggle and complaints with the political class,” said Abraham Soto, 25, a candidate for Congress with ARENA.

Some celebrants have expressed hope El Salvador improves after St. Romero’s canonization, but as one young person said, people often embrace his image as a national hero without heeding his words.

“Only young people are interested in his message,” said Miguel Mercado, 22, a student. “It continues being valid.”

PREVIOUS: Young people, even those far away, are ‘ours,’ Salesian says