St. Hubert’s girls learn how small sacrifice for CRS can save a life 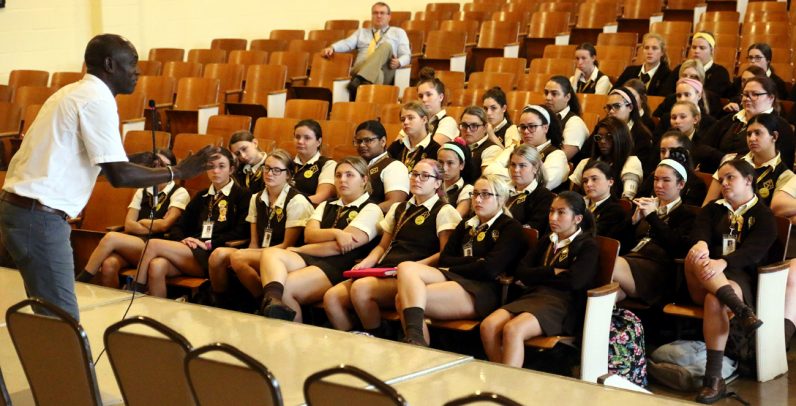 A class of students at St. Hubert’s Catholic High School for Girls, Philadelphia, listens to a talk by Thomas Awiapo Sept. 25. He described how Catholic Relief Services makes a difference in the lives of millions of people overseas, and how the students can aid that work especially through the annual Operation Rice Bowl program. (Sarah Webb)

When Thomas Awiapo was an orphaned kid in Wiaga, a village in Northern Ghana, he would walk five miles to school and five miles back. He really didn’t like school; he didn’t see the point of it. Nobody in his family had ever gone to school, as least as far as he knew.

But he did like to eat and needed to eat. At the school they fed the children a little meal and that was important.

Thomas was a true orphan — both of his parents were dead and two younger children in the family died from malnutrition. His older brother had left. Thomas ate what he could scrounge and that wasn’t much. He didn’t have a friend in the world.

That little meal he got at school, he came to realize, came from America and Catholic Relief Services.

Thomas also came to appreciate the value of school and through scholarships went on to high school and college and then graduate school in America.

Now he is married and has children of his own. And for the past 18 years he has been an employee of CRS in Ghana but spends part of his time crisscrossing the United States, speaking at schools and parishes, spreading the message that Catholic Relief Services saves lives. 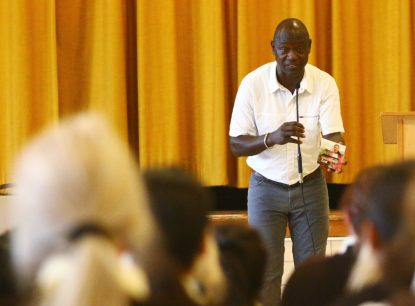 His only prop is the little cardboard rice bowl that CRS distributes every Lent, challenging people to eat less and place the money they saved in the bowl. Of course, if you don’t eat less but put money in anyway, nobody will complain. The money collected is a major source of income for CRS food programs around the world.

“People have supported (Operation) Rice Bowl for 43 years,” Awiapo said. “It touched my life and it is still touching lives. It’s my way of saying, ‘You can make a difference,’”

Jeff Wallace, a senior program officer with CRS who accompanied Awiapo, commented, “It’s amazing to see how Thomas’s story resonates with people of all different cultures. People hear of the pain and the struggle he went through and how his life was made better with the help of Catholic Relief Services.”

At St. Hubert High School, which was one of the leading schools in Operation Rice Bowl contributions last year, presentations like Awiapo’s are important because it’s not just about Catholic Relief Services and places like Ghana.

“It takes what the students learn in the classrooms and applies it to real life,” said Eric Stonesifer, the school’s assistant principal of academic affairs. “They get to understand that the mission of the church is not just something that they read in books, it happens in real life. It affects individuals, it affects countries.

“For every gift God gives us we are called to give part of that back to people around the world in need. They appreciate that.”

Judging by the attentiveness of the students during the presentation and questions after, the message clearly was not lost.

“I was inspired by it,” said Liv Budney, a junior. “I knew everything we are putting into the bowls was going to do something good, but I never knew anyone who was affected by it. I’ll put more in now.”

Senior Class President Michelle Garcia was in agreement. “It was really eye-opening how much we take for granted, like food and running water,” she said. “I didn’t realize the impact we have just from those coins we put in the little boxes. It’s lunch money, and I will do it again.”

Who knows, maybe her coins will save the life and inspire a future version of Thomas Awiapo who will come to visit. Jesus said, “The poor you will always have with you.” 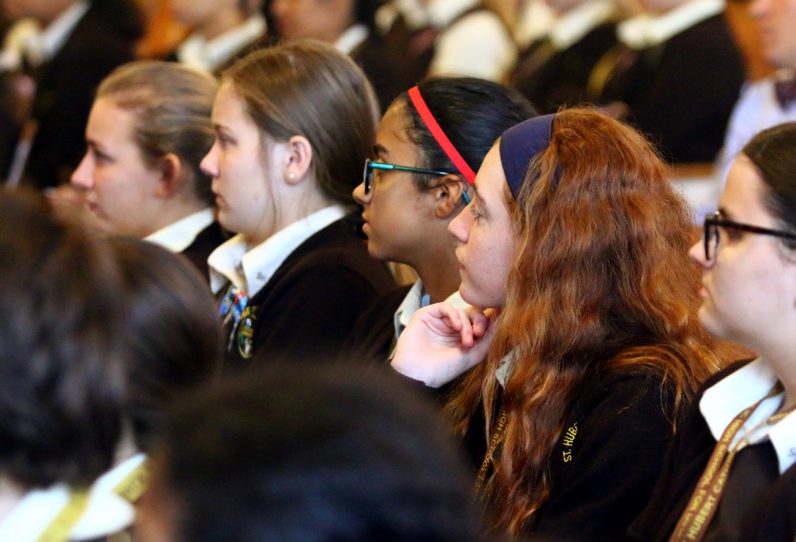 St. Hubert’s students listen to Thomas Awiapo, and employee of Catholic Relief Services and a man who stayed alive thanks to CRS’ work in Ghana. (Sarah Webb)

NEXT: Local Hispanic leaders get to work on top priority: youth ministry