Kavanaugh says he feels no ‘bitterness’ over confirmation process 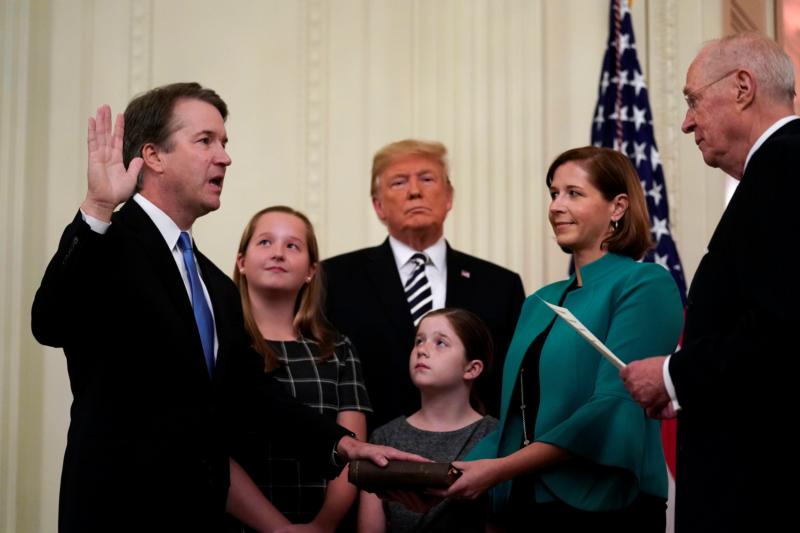 UPDATED – WASHINGTON (CNS) — New Supreme Court Associate Justice Brett Kavanaugh said Oct. 8 he has no “bitterness” over a contentious confirmation process that ultimately ended with a Senate vote Oct. 6 to confirm him for the seat on the high court left vacant by the July 31 retirement of Justice Anthony Kennedy.

“The Supreme Court is an institution of law. It is not a partisan or political institution. The justices do not sit on opposite sides of an aisle. We do not caucus in separate rooms,” Kavanaugh said in remarks at an evening ceremonial swearing-in held in the East Room of the White House. “The Supreme Court is a team of nine, and I will always be a team player on the team of nine.”

Anthony administered the oath at the swearing-in, which was hosted by President Donald Trump. The packed room include Kavanaugh’s wife and daughters and other family members along with Chief Justice John Roberts and all the associate justices. Kavanaugh was to hear his first cases Oct. 9 with the rest of the court.

Roberts officially swore in Kavanaugh late Oct. 6, after the Senate’s 50-48 confirmation vote, which took place despite the interruptions of screaming protesters who had to be escorted from the gallery that oversees the Senate chamber.

The demonstrators were voicing their objection to the confirmation because Kavanaugh had been accused of sexual misconduct. The vote followed the conclusion of a weeklong FBI probe. The agency’s final report was not released to the public but made available to all the senators for their review; the agency found no corroborating evidence on the claims.

In an Oct. 6 statement, Kavanaugh’s high school alma mater, Jesuit-run Georgetown Preparatory School in the Washington suburb of North Bethesda, Maryland, noted how when he first accepted Trump’s nomination, Kavanaugh stated that “one of the goals of Jesuit education is the aspiration to be a ‘man or woman for others.'”

“The call to public service is one of the highest manifestations of that ethic,” the school said. “Georgetown Prep congratulates Justice Kavanaugh on his confirmation and promises our prayers for him and his family as he strives to be that person for others in the service of our nation.”

Kavanaugh, 53, graduated from the school in 1983 and joins another alumnus of the school on the court, Associate Justice Neil Gorsuch, who graduated in 1985. Gorsuch, who also was nominated by Trump, was confirmed in April 2017.

On July 9, Trump nominated Kavanaugh, a judge on the U.S. Court of Appeals for the District of Columbia Circuit, to fill the vacancy left by the retirement of Anthony Kennedy.

Even when Kavanaugh, a Catholic, was still on a list of potential nominees, many Democrats vowed they would oppose his confirmation. The chorus of objections only grew when allegations of sexual assault were lodged against the nominee in the Eleventh Hour of the confirmation process. And after his confirmation, Kavanaugh’s opponents said they would continue to protest him taking a seat on the high court.

Hours after the Senate voted, a watchdog group began a petition calling on the House Judiciary Committee to impeach the new justice — in anticipation of Democrats winning a majority of House seats in the midterms and therefore having a Democratic committee chairman.

The evening of Sept. 23, Sen. Dianne Feinstein, D-California, who is the ranking member of the committee, released a letter she had received sometime in July that was written by a woman, later identified as Christine Blasey Ford, claiming that Kavanaugh sexually assaulted her at a party 36 years ago when they both were in high school in the Washington area.

On Sept. 27, the committee held a daylong hearing to allow Ford to give her testimony. Kavanaugh also testified, vehemently denying any such assault occurred. He said he did not even know Ford.

Afterward, the committee voted to send the Kavanaugh nomination to the full Senate, but also agreed with a proposal by Sen. Jeff Flake, R-Arizona, to give the FBI a week to investigate claims made against Kavanaugh.

The FBI wrapped up its investigation Oct. 3 and sent its report to committee members for their review. On Oct. 5, senators voted 51-49 to move the Kavanaugh confirmation to the final vote.

The FBI report was not released to the public, but according to news reports, a single copy was made available to the senators to read in a secure room in the basement of the Capitol. They each had one hour to review it.

Before casting her vote to confirm Kavanaugh, Sen. Susan Collins, R-Maine, said in a speech on the Senate floor that she was fully confident the FBI inquiry into the allegations against Kavanaugh was “thorough” and it showed there was no corroborating evidence for any of the claims made against the nominee.

But opponents of Kavanaugh still claimed the accusations were “credible.” The Rev. Jennifer Butler, who is CEO of Faith in Public Life, denounced the confirmation vote in an Oct. 6 statement, calling it “a moral travesty.”

“The Senate has woefully failed to perform their duty of advise and consent,” she said. “Judge Kavanaugh is unfit to serve on the Supreme Court due to the credible sexual assault allegations against him, as well as the lies, highly partisan comments and veiled threats he made during his confirmation hearings.

“As a pastor and a woman of faith, I believe justice will not be blind with Kavanaugh on our nation’s highest court.”

Among those who praised the Kavanaugh confirmation was Marjorie Dannenfelser, president of the Susan B. Anthony List, which supports pro-life candidates.

“We congratulate Justice Kavanaugh on his well-deserved and hard-earned confirmation,” she said in an Oct. 6 statement. “The balance of the Supreme Court has shifted back toward one that respects the will of the voters expressed through their representatives — a resounding victory for American people, who overwhelmingly trusted President Trump to choose Supreme Court nominees. ”

As Kavanaugh takes his seat on the bench, alongside Gorsuch, Dannenfelser said, “we are confident he will continue to rule with the same fairness and independence that have characterized his entire legal career.”

NEXT: Bishop prays for refugees ‘left in harm’s way’ with cap on admissions