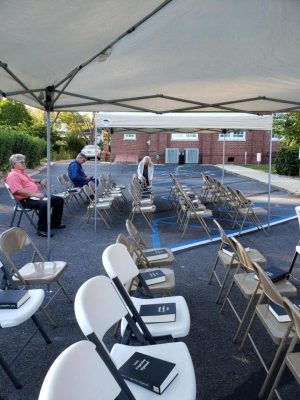 SAVANNAH, Ga. (CNS) — Assistance is on the way for residents of the Diocese of Savannah still recovering from the effects of Hurricane Michael, thanks to a financial gift of $250,000 from Catholic Charities USA.

Though the 155-mph, Category-4 storm, which made landfall Oct. 10 near Mexico Beach, Florida, exited Georgia by the end of the next day as a weakened tropical storm, many residents of South Georgia and beyond could not return to their normal routines for days, in some cases a week afterward. Others are still struggling.

Students at St. Teresa School in Albany did not return to classes until Oct. 16, while students at other diocesan schools returned Oct. 12 after schools closed the previous day.

In some areas, like Blakely and Cordele, churches did not regain electricity until at least Oct. 18, compelling priests to celebrate Mass by candlelight or outside, respectively, the weekend after the storm.

Even as far north as Macon and Augusta, buildings and grounds sustained roof leaks, downed trees and power lines, and/or other damages.

Sister Brown told parishes in an email that they must apply to receive a portion of the funds, which will be distributed at the discretion of Catholic Charities of South Georgia in November and December. The application lists housing and home repairs; health care and mental health; child care; and transportation and legal assistance as eligible categories of funding.

Marsala is assistant to the editor of the Southern Cross, newspaper of the Diocese of Savannah.

NEXT: Court hears arguments in suit aiming to take mandate exemption from nuns