Encuentro veterans feel Texas event, like predecessors, will be fruitful 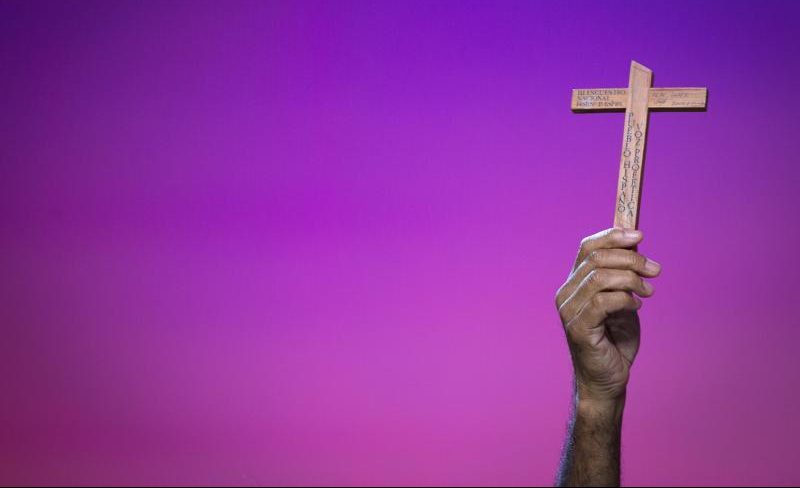 Jose Lopez, Hispanic minister from Stockton, Calif., raises the cross he received in 1985 from the Third National Encuentro during a Sept. 22 plenary session at the V Encuentro in Grapevine, Texas. (CNS photo/Tyler Orsburn)

GRAPEVINE, Texas (CNS) — Years of backbreaking work in the vegetable fields of California, Oregon, and Washington introduced Jose Lopez to the Encuentro process in 1985.

The national meetings, started in 1972, were designed to help the Catholic Church respond to the needs and realities of a growing Hispanic population in the U.S.

“I went to the III Encuentro to represent the migrant farmworkers in Region XI,” he said recalling the Aug. 15-18, 1985, gathering of 2,000 Hispanic Catholics and 56 bishops in Washington. “At the time, I was a volunteer and part of a diocesan committee on youth. I was the voice of the migrant.”

During discussions, Lopez asked for more church involvement, based on social teaching, to help the many temporary workers who harvest crops in the U.S. Along with his father and brothers, he spent a lifetime picking cherries, tomatoes, cucumbers and asparagus up and down the Pacific Coast.

“At the time, the laws didn’t support farmworkers,” said the veteran participant of multiple encuentros. “We didn’t have enough water in the field and not enough restrooms or breaks.”

In addition to the plight of migrant workers, delegates at III Encuentro, the Third National Encuentro, discussed evangelization, leadership formation, and the needs of Hispanic youth.

“The fruit of that Encuentro was that more offices were opened for Hispanic ministry,” said the Mexico native who picketed tomato growers with Cesar Chavez in the 1980s. “More attention was paid to youth and young adult ministry too.”

Most of the foreign nationals brought into the U.S. under the H-2A visa program to fill temporary agricultural jobs are young people and many pass through his diocese, said Lopez, now director of youth, young adult, and migrant ministry for the Diocese of Stockton in central California.

He also attended Encuentro 2000 and the first National Encuentro for Hispanic Youth and Youth Adults at the University of Notre Dame in 2006. As president of the Catholic Migrant Farmworker Network, the organizer served on the national committee for the V Encuentro, or Fifth National Encuentro, hosted by the Diocese of Fort Worth in September in Grapevine.

“This Encuentro was a special time — a blessed time,” Lopez told North Texas Catholic, Fort Worth’s diocesan magazine. “People left Encuentro with this challenge: How can we work with (Hispanic) youth and young adults right now? That’s the big focus.”

When Paola Quintero-Araujo went to the first national Encuentro for Hispanic young people in 2006 as a delegate from the Diocese of Dallas, she witnessed the church’s universality.

“I saw what being ‘catholic’ means,” said Quintero-Araujo, who is now director of the St. Junipero Serra Institute in the Diocese of Fort Worth. “People from all corners of the country and backgrounds gathered under the same roof to talk about our church, Hispanic contributions and needs.”

Interregional breakout sessions discussed formation and the development of leadership roles focused on the increasing number of Hispanic young Catholics.

“There was an understanding that if we’re going to have this surge within the Catholic Church, we should have leaders that understand the culture and language so we’re ready to work with them,” she pointed out.

Initiatives and opportunities were put in place after the 2006 Encuentro to achieve the goal. Quintero-Araujo is proof of that outreach. The Colombia native received a scholarship to the University of Notre Dame where she earned a master’s degree in theology with an emphasis in catechesis. She went on to serve Hispanics at the parish and diocesan level in Dallas and later in Fort Worth.

“And I wasn’t the only one,” she said. “There are other (young people) who identified a calling and went on to work in parishes or the ecclesial movement.”

A panelist at V Encuentro and part of the diocesan team organizing the event’s liturgies, Quintero-Araujo wants the spirit generated at the latest Encuentro to continue.

“My hope is we move from activism to mission and evangelization in catechesis,” she said. “I want to move forward and not come back to another Encuentro, 10 years from now, and talk about the same things.”

Marlene Ledesma still remembers the energy she felt after attending the 2006 Encuentro with 50 other young people from the Diocese of Dallas.

“It was amazing. We shared our stories, struggles, resources and things we have in common,” explained the young adult coordinator at St. Ann Parish in Coppell. “Our leaders motivated us to keep moving forward. We came back home full of energy to become more involved.”

The 2006 Encuentro ignited something inside her.

“I started to participate in more groups, go to retreats, and prepare for the future,” Ledesma added.

She now works with her parish’s confirmation group and notices how some Hispanic youth have identity issues, depression and feel isolated in society. The youth volunteer brought her concerns to V Encuentro.

“What we did was create an awareness of what it’s like being a Hispanic in the U.S. But we’re also Catholic,” she asserted. “It’s wonderful the church is aware of what Hispanics are going through.”

Kurkowski-Gillen writes for North Texas Catholic, the magazine of the Diocese of Fort Worth.

PREVIOUS: From Ohio to Kenya, Glenmary brother trots globe in search of vocations