From Nairobi to New York, human life should be respected, says speaker 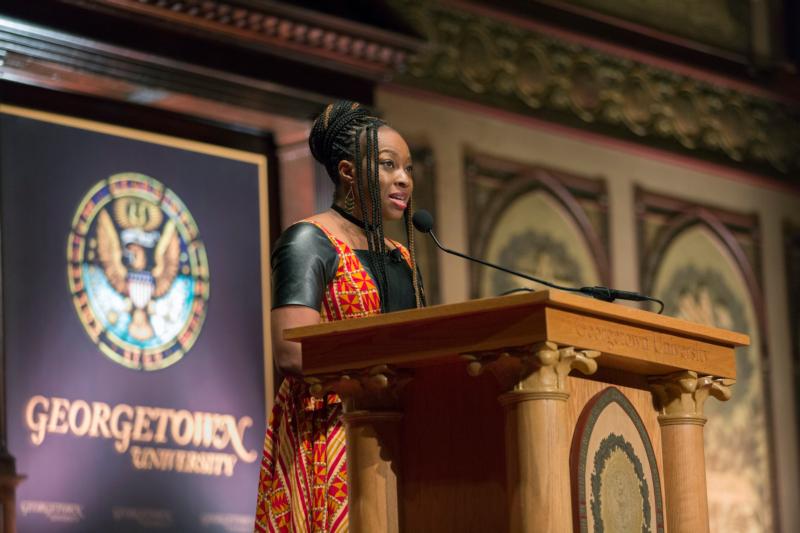 WASHINGTON (CNS) — Obianuju Ekeocha, founder and president of Culture of Life Africa, encouraged a Washington audience Oct. 23 to celebrate the birth of babies and to ensure that U.S. government funds do not go toward promoting a culture of abortion in Africa.

She spoke during the second annual Lives Worthy of Respect event at Georgetown University.

During her Oct. 23 talk, she explained how African culture embraces those pro-life values.

“The African people have a culture of life,” she said. “The recognition of human life from the womb to the tomb is a common thread that runs through many tribes and towns of Africa.”

She recalled how in the village where she grew up in Nigeria, “new life is welcomed with joy.” There is a special call reserved for the birth of a baby, and the entire village celebrates the first day of a baby’s life. People sing, dance and clap, “celebrating like it is the #RoyalBaby,” she said.

“As a society, we love and welcome babies,” said Ekeocha. “Amidst our different difficulties and afflictions … our babies are always a firm sign of hope.”

But many of the Western organizations trying to help out in Africa do not embrace life in the same way, Ekeocha said.

The era of colonialism is over, she said, but there has been a “return of Western footprints in Africa,” in the form of powerful nongovernmental organizations, or NGOs, that promote “population programs” to give access to abortion and contraception.

“We are looking upon our child — one baby — not as an increase in population, but as a valuable member of our community of love,” she said, adding that donors spend so much money to “buy us streets devoid of the chatter of children.”

African people are concerned about the unmet demands of the continent, such as the need for affordable food, clean water, health care and education, she said, recalling how “some of those were my very own concerns” while growing up. She expressed gratitude for those people who had participated in mission trips and projects that genuinely helped fill those needs, but said, “This is not the common approach taken by the wealthiest and most prominent donors.”

According to data from 2013, she said population programs receive more donated funds than education, health care or clean water. African countries receive about two billion donated condoms every year, which costs about $17 million — money that could go toward solving these other problems, she said.

Right now, only four out of 54 African countries have legal abortion, though several are struggling to keep their pro-life laws, because the loudest voices and strongest lobbyists are Western NGOs or people being funded by them, who believe abortion should be legalized, she said.

Ekeocha called this moment “our 1972,” and said, “the main task of the young pro-life movement is to ensure a 1973 does not creep up on us,” referring to the year that abortion was legalized in the United States by the Supreme Court’s Roe v. Wade ruling.

They have observed how the legalization of abortion has killed babies, hurt mothers and destroyed families, she said.

“Abortion is a direct attack on human life and human dignity,” she continued. “This is why Africa rejects it.”

But because Western NGOs see Africa as a “cultural vacuum to be filled with their ideas,” they plan initiatives in their own language, Ekeocha said, noting that she was not referring to English or French, but rather to phrases like “reproductive rights,” “bodily autonomy” and “right to choose.”

She also mentioned that there is an effort to blame some countries’ high maternal mortality rates on their choice to resist legalizing abortion, rather than tying it to address gaps in women’s health care.

“Whether you know it or not, this concerns you,” she said, encouraging anyone who is an American taxpayer to demand that the United States does not fund abortion organizations either at home or abroad.

She praised the decision by the Trump administration to reinstate the Mexico City Policy, which prevents any NGOs that receive federal funding from either performing or promoting abortions in other countries. But she also noted a television advertisement for condoms by USAID that outraged many Africans because of the way it seemed to celebrate marital infidelity.

In addition to monitoring what these organizations do, Ekeocha asked everyone to continue promoting the culture of life here, and as they do so, to make room for women in crisis pregnancies, to care for post-abortive women, to mourn the babies that were lost, and to celebrate babies who are born.

“Celebrate them like you are African,” she said. “That is one marvelous type of cultural appropriation we can all agree on.”

Because of the influence that the United States has around the world, she emphasized, “If you are pro-life, the ripples of your culture of life will be felt in countries near and far.”

“Laws come and go, but universal truths remain,” she said. “From Nairobi to New York … from Africa to America, human life begins at conception. Every life deserves protection. Every single life is a life worthy of respect.”