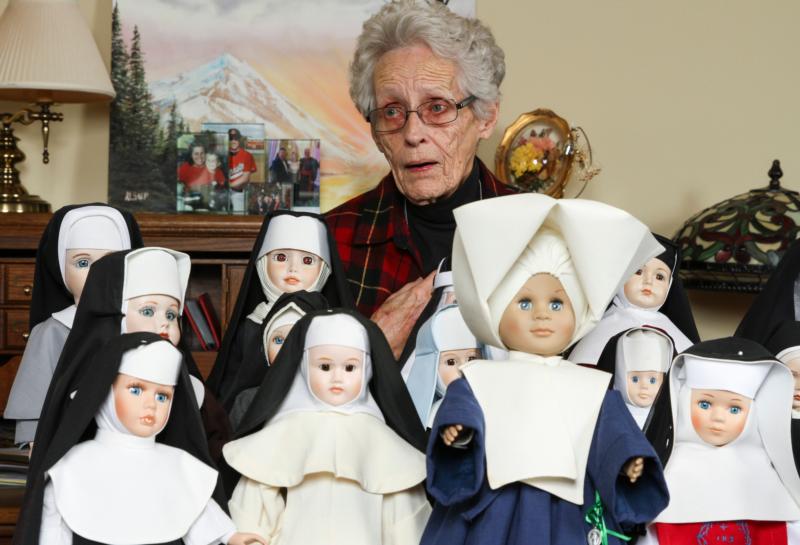 So, when it came time to look for a permanent home for her beloved figurines in late 2017, she found a place that would help preserve the historical legacy of the women religious these replicas represent.

The 75 carefully and meticulously created nun dolls in Alsup’s collection are now in the care of the Archdiocese of Atlanta’s Office of Archives and Records, where they are in full display.

These dolls not only offer the archdiocese historical context to women religious, they’ve spurred the curiosity of visitors, said Angelique Richardson, director of the office of archives and records.

Richardson said it’s been fun to see people’s reactions when they come to the archives office and notice all the dolls together on a table looking across the room. Visitors try to find the orders of the nuns who taught them or the ones who are family friends.

Educated by the Sisters of St. Mary of Oregon, Alsup sewed the dolls’ traditional habits by machine from authentic materials provided by Catholic sisters whose congregations are represented.

“There were people in my life that I think are kind of in them,” she told the archivists who arrived to transport the dolls.

The collection, Alsup’s second one of nun dolls, had been in attic storage for nine years, yet remains in excellent condition. She sold her first collection in the 1970s to fund a trip to Israel.

The dolls all have porcelain faces and range in height from 15 to 32 inches. They have rosaries and medals, and habits in a variety of fabrics. She started the second collection in the 1980s.

Alsup also wanted the reality of each doll to be recognized, so she attached a handwritten card to each replica’s religious order, the date of the congregation’s founding and how the order has served the church.

It was a project that Alsup, now in her mid-80s, undertook during the span of many years.

“I just kept at it, you know, doing little things,” she said.

Alsup first became interested in nun doll collecting after helping a stroke victim make clothes for dolls. After the woman died, her husband gave many of the porcelain dolls to Alsup out of gratitude.

Religious orders from around the country would send her something for the dolls in the mail, including discarded habits from which to fashion a smaller version.

“I always sent them a reward,” she said smiling.

For a St. Frances Xavier Cabrini doll, a sister “tatted a little bonnet for me,” she added.

She would order doll shoes and religious items, and authenticity was important.

“They all have real rosaries — no fake stuff and real medals,” said Alsup.

She first tried to locate a buyer for all the dolls, but not many people are still collecting today, she said. Alsup decided she wanted them to go to the archdiocese instead, so they would be appreciated.

Alsup also donated the reference books she used to research the various congregations, including “A Guide to the Catholic Sisterhoods in the United States,” Richardson said.

The archives office now has a small display case set up in a lobby area of the archdiocesan chancery in Smyrna, as well as in the archives, with a few dolls on exhibition.

Every Sunday, the office of archives will feature a #SisterSunday image on its Facebook page — www.facebook.com/archatlarchives — one doll a week for 75 weeks.

Golden is on the staff of The Georgia Bulletin, newspaper of the Archdiocese of Atlanta.

NEXT: Bishops to consider endorsing sainthood cause of Sister Thea Bowman