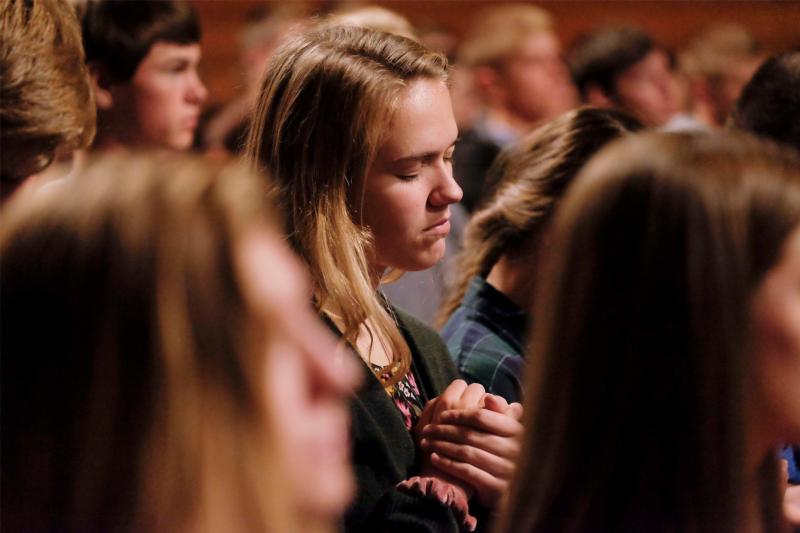 CARROLL, Iowa (CNS) — Keynote speakers at annual Rekindle event for teens in the Diocese of Sioux City emphasized God’s love to those in attendance, something that seems to be lost on today’s young people.

“That’s because they spend their day in search of constant validation,” said recording artist Noelle Garcia.

“So much has to do with being validated on social media.”

“Their culture is such an influence on them,” added Sean Forrest, another speaker with a music background. “I tell them don’t let your emotions deceive you into making choices. You need your heart, but you also need your intellect.”

The main speakers shared their faith journeys with more than 500 students in seventh through 12th grade at Kuemper High School in Carroll. Four breakout sessions and a service project rounded out the day in early October.

This year’s Rekindle theme was “The Gift of God that Is Within You.”

Music was an important part of the event and featured two nationally known musicians.

Garcia used music, story, witness and prayer to spread the Gospel message to the youth. She has been speaking to youth and adults for more than 10 years about her faith journey.

“I grew up in a family who went to church a lot,” the vocalist said. “As I grew older, I didn’t attend as much.”

Garcia recalled being “forced” to attend a retreat as a young person, much like the one she was speaking at.

“I threw an incredible temper tantrum with my mother,” she said. “I finally conceded and agreed to attend only one day.”

Garcia confessed she could not see into the future for the participants.

“I wish I could tell each of you why and where you are going, but I cannot,” she said. “What I can tell you is God loves you and that love is so real and profound that it should change the direction of your life.”

Forrest grew up in household with a Catholic father and a Protestant mother.

“I became an agnostic, then a Buddhist and finally reverted to Catholicism,” he said.

Forrest has lived most of his life in the public eye since 1986, with a singing and songwriting career, performing with the likes of Elton John and Billy Joel.

“I had the condo beach house and had amassed all the toys one can imagine and suddenly thought there must be more to life than this,” he said. “Yes, I was living, but I was really dying.”

Forrest went on a faith search, encountered Christ and began a new journey.

“I cringe when people say these kids are the future of the church,” he said. “They are the church and I tell them they need to get serious about their faith.”

Forrest has reason to be concerned, since by the time individuals turn 23, more than 80 percent will leave their Catholic faith.

“They have to understand how much God loves them,” he said. “It’s the cross. It’s Christ crucified. God used that sacrifice to show what love is.”

Samantha Schwarte, a junior at Kuemper, may have wondered if sitting in the front row of Forrest’s talk was a wise choice, as he chose her for an example of what love might be.

“Yes, that surprised me,” she said later in an interview with The Catholic Globe, newspaper of the Diocese of Sioux City. “But I thought his message was really good. Jesus is the truth we need, and God does love everyone.”

Anthony Vera traveled from Le Mars to participate in the event.

“I think my faith is mostly set, but I wanted to experience this event to take something back home,” said the junior at Gehlen Catholic. “I have been inspired and excited to maybe make a difference with my faith.”

In addition to the speakers and breakout presentations, Sioux City Bishop R. Walker Nickless celebrated Mass for those in attendance.

“I decided to come for the entire day,” he said. “I think it’s important for our young people, most of whom I have already confirmed, to see me outside that experience, to know I care about them and I’m not a stranger to them.”

Young people had the opportunity to participate in a service project — Then Feed Just One, a mobile food-packing program that helps to alleviate world hunger.