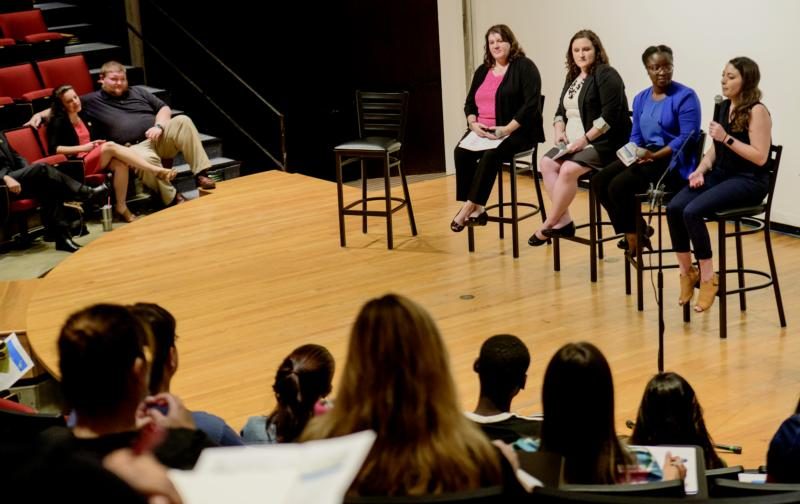 HOUSTON (CNS) — When Edrina Villagomez’s parents came to the United States illegally, they achieved the dream of her grandfather: to come to “El Norte,” the North, and live and work in the U.S.

A college senior majoring in international studies, Villagomez understands the sacrifices her family had to make to realize the dream.

The family’s situation, involving a complex web of international and local factors, was the focus of a Sept. 25 forum on immigration hosted by the University of St. Thomas campus ministry and co-sponsored by Catholic Charities of the Archdiocese of Galveston-Houston and the Texas Catholic Conference of Bishops.

Panelists included Jennifer Carr Allmon, executive director of the state Catholic conference; Elise Griesmyer, supervising attorney for Catholic Charities of Galveston-Houston’s St. Frances Cabrini Center for Immigrant Legal Assistance; Aisha Koroma, a former refugee from Sierra Leone now working in social services; and Maria Trevino-Rodriguez, who is in the country without legal documentation and is a student and activist at the University of Houston.

Allmon focused on Catholic social teaching, noting that the Texas bishops’ position is “rooted in human dignity” and believes enforcement should be targeted, proportional and humane. Enforcement efforts should not divide families, abridge any basic rights, or risk danger to immigrants or enforcement officers, she said.

Griesmyer encouraged the audience to maintain empathy for immigrants and to open their hearts and minds when discussing the issues facing people on the move.

Likewise, Koroma urged people to “see the human in someone first” and to move beyond government labels such as refugee, asylee or immigrant.

“These are not immigrant issues, these are people issues,” said Koroma, who lived in a refugee camp as a child, but came to Houston when she was 14.

Trevino-Rodriguez often advocates for those who benefit from the Deferred Action for Childhood Arrivals program, known as DACA, for young people brought to the U.S. as minors by parents or family members. She crossed into the U.S. with her parents as a 1-year-old and said she didn’t know she was in the country illegally until she started applying to colleges.

“My life is political whether I like it or not,” she said, highlighting the upcoming November elections and encouraging the audience to be informed and to vote.

Noting that the immigration issue is both controversial and often difficult to discuss, Trevino-Rodriguez encouraged that dialogue begin on common ground.

“We’re so polarized, and I don’t think we should be polarized,” she said. “It’s just about meeting that common ground and make it a bipartisan issue … both parties need to take a conscious effort and be cognizant in actually making reforms and laws that are going to help immigration.”

Basilian Father Chris Valka, university chaplain and campus ministry director, said he appreciated the diversity of perspectives on an “issue that is very complicated and not one dimensional.”

He found that the discussion reflected much of what Pope Francis has stressed during his pontificate.

“It’s embedded in our Catholic social teaching about the migrations of peoples,” Father Valka said. “This is a human dignity issue. As a diocese in Texas, we are particularly affected by the impacts of decisions that are made at a national level. It affects us at a local level.”

Pope Francis, with a network of international relief agencies, invited people of goodwill to get to know people on the move. He introduced the Share the Journey program in September 2017 as one way to connect refugees and migrants with people living stable lives.

Cardinal Daniel N. DiNardo of Galveston-Houston, working with other faith leaders, has called for comprehensive immigration policy reform on the federal level that can defend the dignity of immigrants as well as protect the country’s borders.

During a visit to Brownsville, Texas, in July, Cardinal DiNardo addressed myriad issues including the separation and detention of children from their families.

The cardinal said the church was willing to join any conversation to reach humane solutions because even under a policy of detaining entire families in facilities caused concern. The U.S. border bishops have frequent communication with their counterparts in Mexico and Central America on many topics, he said, but the problems driving immigration to the U.S. are complex.

Villagomez said knowing her family’s history helps her to understand her future choices “because now I have the ability and the opportunity to dream as much as I want. … I can have anything, but (my grandpa) didn’t have that opportunity.”

She encouraged other college students to stay informed and to “know that you can make a change.”

“We are the new generation, and so we want to be the ones to build a road for change.”