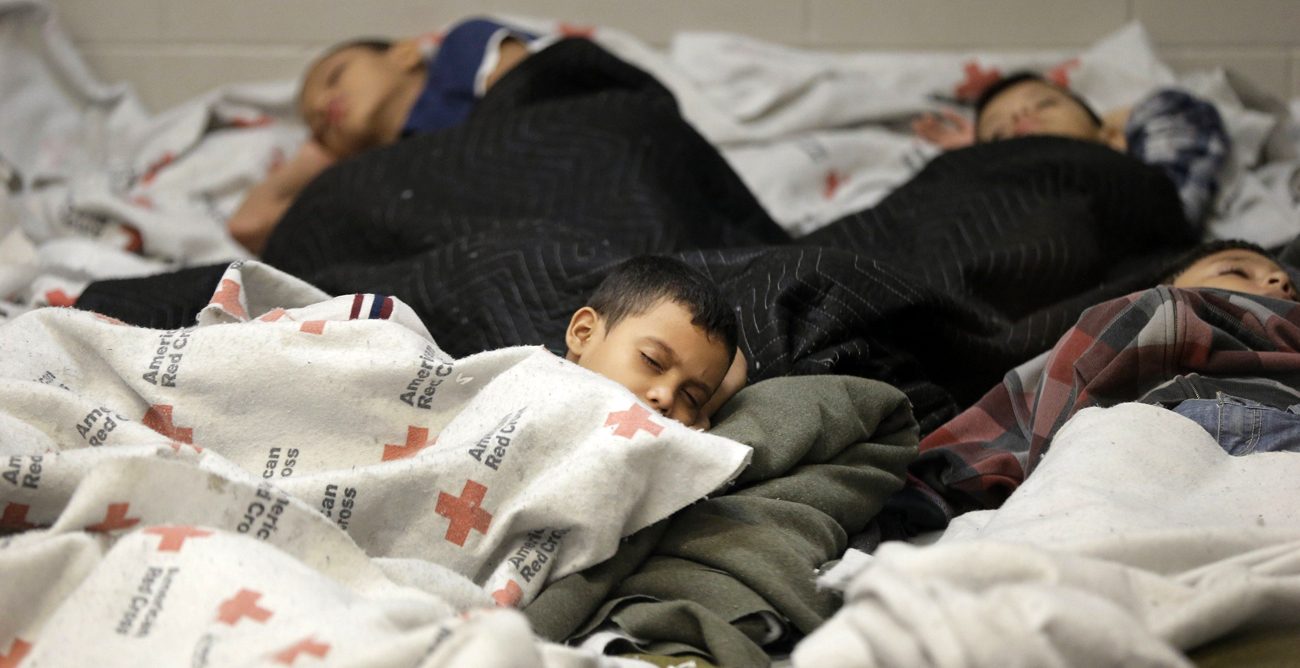 Detainees sleep in a holding cell at a U.S. Customs and Border Protection processing facility in Brownsville, Texas, in this CNS file photo. (CNS photo/Eric Gay, pool via Reuters)

WASHINGTON (CNS) — The Sisters of Mercy of the Americas said they are “outraged and appalled” by a recent report of migrant children being moved to a tent city in Texas, adding that what is happening now “pales in comparison to the trauma and uncertainty these young girls and boys and their families will experience for years to come.”

“The photos and reports of these detention centers for children are the most recent example of how the Trump administration has continued to ratchet up its aggressive approach to tearing immigrant families apart while offering no remedy to decades of failed U.S. foreign policy that has produced the conditions from which people are fleeing for their lives,” said an Oct. 3 statement by the Mercy sisters, based in the Washington suburb of Silver Spring, Maryland.

A New York Times article Sept. 30 said migrant children in shelters across the country were being transported in the night in recent weeks to a tent city on desert property in Tornillo, Texas, outside of El Paso. At the time, 1,600 children were at the site with more expected since it was expanded to house 3,800 and to remain open until at least the end of the year.

The report said children are housed in tents in groups of 20 with no school or workbooks and limited access to legal services as “the federal government struggles to find room for more than 13,000 detained migrant children — the largest population ever — whose numbers have increased more than fivefold since last year.”

Evelyn Stauffer, a spokeswoman for the U.S. Department of Health and Human Services, said in a statement to The New York Times that “it is common to use influx shelters as done on military bases in the past, and the intent is to use these temporary facilities only as long as needed.”

She also said the need for the tent city reflected problems with the immigration system.

Stauffer said the children’s ages and the dangers they face “make unaccompanied alien children vulnerable to human trafficking, exploitation and abuse,” which is why the agency joins President Donald Trump in “calling on Congress to reform this broken system.”

Moving these children to the Texas tent city is meant to be temporary and primarily for older children considered likely to be placed with sponsors.

In mid-September, HHS, the federal agency in charge of caring for migrant children and teenagers in U.S. custody, said it was setting up the tent camp to accommodate a growing number of Central American children crossing the border.

The camp was initially established in June as a temporary shelter because other facilities were running out of space at the height of the Trump administration’s “zero tolerance” policy for immigrants crossing illegally into the United States which separated about 2,500 migrant children from their parents.

Rep. Joaquin Castro, D-Texas, sent an Oct. 2 letter to HHS Secretary Alex Azar asking what is being done to protect the children at this tent city and how long they’re expected to remain there. He also asked whether the government plans to open more such facilities.

“I inspected the Tornillo tent camps in June and can attest that it is no place for a child to live,” the Catholic representative wrote.

He also urged that these children be released to sponsors as soon as possible, pointing out that “studies show that these shelters cause children stress, prolonged illness and can lead to long-lasting mental and physical consequences.”

PREVIOUS: By helping a mom choose life, woman shows how one person can impact cause